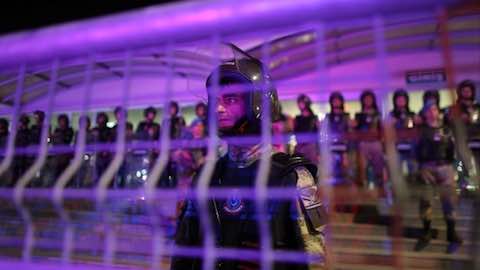 by Steven A. Cook (Council on Foreign Relations)

After the failed coup in Turkey and Erdogan's brutal crackdown, the United States relationship with Turkey has gone south fast.

A bipartisan group of U.S. senators sent a letter to President Trump expressing their "grave concern about the continuing erosion of human rights and decline of democratic values in Turkey." The letter reflects a growing frustration on Capitol Hill with Turkish President Recep Tayyip Erdogan and the need for the Congress to take a strong stand against the Turkish government's excesses.

Turkey has become one of the most repressive countries in the Middle East. The number of people jailed and killed there equals or exceeds that of Egypt, for example. Of course the deterioration of human rights and the Turkish leadership's disregard for democratic principles began well before the failed coup in July 2016, but the senators nevertheless deserve credit for highlighting problems that the Trump administration and the Obama team before them preferred not to address directly and publicly. Congress had generally deferred to the White House until Metin Topuz was arrested on Oct. 4.

He is not -- like the many thousands of others who have been arrested -- a dissident, a journalist, an editor, a Kurdish politician, a police officer, a judge or a lawyer. Topuz is a foreign service national, or FSN, who has spent the better part of the last three decades working out of the U.S. consulate in Istanbul for the Drug Enforcement Agency. His arrest was a major diplomatic breach that led the Trump administration to stop processing non-immigrant visas for Turks, prompting the Turkish government to respond in kind.

There was some speculation that when Turkish Prime Minister Binali Yildirm visited Washington last week a deal over the issue was in the works. In reality there was little to negotiate because the "visa crisis," as it has come to be known, is connected to high-stakes Turkish domestic political dramas that are playing out thousands of miles away in the halls of the Justice Department and a courtroom in lower Manhattan. Topuz and others are merely bit players in this tragedy that, if Turkey's leaders have their way, will weaken the rule of law in the United States.

Most Americans likely have no idea that U.S. diplomatic missions around the world would not function without the help of citizens of the host country who work for the United States. Foreign service nationals perform all kinds of functions. They are often the first point of contact when visiting an embassy or consulate, manning the entrances and exits well before and after encountering the Marine Guards. They are drivers, cleaners and cooks -- a foreign service national at the U.S. embassy commissary in Ankara baked the best chocolate chip cookie I have ever had.

These dedicated men and women are also economic and political analysts, cultural affairs officers and development professionals. With American diplomats on tours of duty anywhere from one to three years, it is the FSNs who provide institutional memory and continuity at American posts abroad. Since Topuz's arrest, the Turkish government has upped the ante. In early October, police officers searched one of the homes of another FSN from the consulate in Istanbul, Mete Canturk. They also briefly detained his wife and daughter. Canturk was never arrested, though Turkish officials claim he is a supporter of Fethullah Gülen, the dissident cleric who lives in exile in Pennsylvania and has been accused of inspiring the attempted coup of July 2016.

With Topuz's arrest, he has joined another FSN in jail in Turkey, Hamza Ulucay, a longtime employee of the U.S. consulate in Adana who was jailed last March. Both are accused of "being a member of a terror organization." Why is the Turkish government arresting FSNs? According to officials in Ankara, the explanation is Topuz's case is straightforward: He is a Gülen supporter and thus suspected of playing a role in last year's attempted coup. Government investigators claim, for instance, that Topuz was in regular contact with others suspected in the plot.

It is impossible to know for sure whether Topuz is guilty of what the government asserts. Prosecutors in Turkey often do not impartially apply legal standards to cases under investigation, but rather act as agents of the ruling Justice and Development Party and President Erdogan. As a result, they wield their prosecutorial privileges with devastating effect, ruining the lives of not only those they have accused but -- in Turkey's currently fraught and deeply polarized political environment -- also their families.

Press reporting on the coup and the alleged Gülenist conspiracy is similarly compromised. Over the better part of the last decade, changes in the ownership of major Turkish media outlets -- some of them coerced -- and arrests of journalists and editors have created an environment in which the vast majority of the press is in the hands of owners, managers and journalists who are either crude propagandists or running scared.

This virtual ministry of information cannot be trusted to offer an objective accounting of what really happened on the night of July 15, 2016, or the extent of the Gülen movement's involvement. And it is simply too dangerous to question the official narrative that Gülenists were at the center of the conspiracy. It may well be that Topuz and Canturk were coup plotters. But if neither impartial prosecutors nor the press can undertake a legitimate investigation, the case against them and the Gülenists more generally rests on little more than the assertion that, given what people know about Gülen and his followers, it stands to reason they are guilty. That is weak.

As for Hamza Ulucay, his story is somewhat different. Ulucay, who is part Kurdish, is accused of being a supporter of the Kurdistan Workers' Party (PKK), the terrorist group that has been targeting Turkey for 33 years. According to a former colleague, Ulucay knew more about Kurdish politics and what was happening in the predominantly Kurdish southeast than anyone. He thus played an important role helping American diplomats understand the political dynamics in that often unstable and violent part of Turkey. It is possible, one supposes -- in the sense that anything is possible -- that Ulucay was a PKK member. But it is hard to believe, given the strict security requirements of employment at an American overseas post and the fact that the United States has long listed the PKK as a terrorist organization.

It is also conceivable that the official explanations for the detention of Topuz and his fellow FSNs are not actually the reasons for their arrest. Even casual observers of Turkey's domestic politics and foreign policy know that the Turkish government has insisted that the U.S. government extradite Fethullah Gülen from the compound in Saylorsburg, Pennsylvania, where he has been living since the late 1990s, to Turkey, to stand trial for his alleged role in the summer of 2016's failed putsch.

Turkish officials claim they have provided the State and Justice departments with evidence of Gülen's direct role in the coup, which took the lives of 249 people. Yet thus far, the extradition has not moved forward. Presumably U.S. government lawyers do not believe the evidence against Gülen is as solid as the Turks claim publicly. The resulting Turkish frustration and rage that Gülen remains safely in the United States has reinforced a depressingly widespread belief that Washington was somehow behind or supported the coup. The Turks, it seems, have tried everything to dislodge Gülen from the United States -- from private entreaties and direct efforts to politicize the extradition process to alleged plots to take matters into their own hands and render him to Turkey.

Last week the Wall Street Journal reported that Michael Flynn, shortly before beginning his brief tenure as national security adviser to President Trump, discussed such an arrangement with Turkish officials -- along with a possible payment from the Turks of $15 million -- at a private meeting last December in New York. This raises the possibility that Flynn and his son, Michael Flynn Jr., could face serious conspiracy charges from Justice Department special counsel Robert Mueller, who is apparently looking into this alleged plot. (Through his attorney, Flynn has described the allegations as "outrageous" and "false.")

Similarly, the Turks have gone to great lengths to make the Reza Zarrab case go away. Zarrab is an Iranian-Turkish businessman who was arrested in March 2016 for bank fraud and perpetrating a scheme to get around United Nations sanctions on Iran via gold traders in Istanbul and the Turkish government-owned Halkbank. The Zarrab case is a threat to Erdogan and the ruling AKP in two ways. First, Zarrab had entrée into the highest levels of the Turkish government. If the pre-trial briefs that the assistant U.S. attorneys for the Southern District of New York filed are any measure of what is to come in courtroom testimony, a lot of dirty Turkish laundry is likely to be aired.

Second, revelations about how Zarrab and Halkbank evaded sanctions may place other Turkish banks in the crosshairs of the U.S. Treasury. Press reports in late October suggested that five Turkish banks could face up to $6 billion in fines over sanctions violations. Turkish officials dismissed these reports as rumors, and Erdogan has suggested that the case against Zarrab is part of an American effort to bring him down. Still, if the United States sanctions the Turkish banks as a result of the Zarrab case, it would have a reputational impact on Turkey's entire banking sector and could affect the political prospects of AKP and Erdogan, providing their opponents with an issue they can exploit to highlight the government's recklessness.

In his final meeting with President Barack Obama, Erdogan asked if the president could do anything about the Zarrab case; he did the same in his first meeting with President Trump. Not long after Trump's inauguration, the Zarrab defense team added former New York mayor Rudy Giuliani, a close Trump ally, to its roster. At around the same time, Preet Bharara, the U.S. attorney who brought the charges against Zarrab, was fired. Still, the trial is scheduled to move forward this month.

Could the arrests of Topuz and Ulucay, as well as the harassment of Canturk, be part of an effort to pressure the United States into some sort of deal on Gülen and/or Zarrab? It is hard to believe, but in September Erdogan hinted that the Turkish government would be willing to trade an American pastor named Andrew Brunson, who has been in a Turkish jail since not long after the failed coup, in exchange for Gülen. Brunson is one of at least 15, and perhaps as many as 20, Americans who are being held in Turkey on what human rights groups regard as spurious charges related to support for the Gülen movement or the PKK -- convenient, catch-all accusations. The State Department has been circumspect in commenting on the detained Americans and only took action after Topuz was arrested. Amnesty International has gone so far as to call the detained Americans "hostages."

So much for the strategic relationship or model partnership that Americans have often used to describe ties with Turkey. That nation is not much of a friend; it's more like a "frenemy."

This article was originally published here on Salon.com on Sunday, November 12, 2017.

Photo: Turkish soldiers stand guard outside the Silivri Prison and Courthouse complex during the trial of 17 writers, executives and lawyers of the secularist Cumhuriyet newspaper in Silivri near Istanbul, Turkey (REUTERS/Osman Orsal)