Troops out of Syria: Islamic State, al-Qaeda and Trump's Base All Win 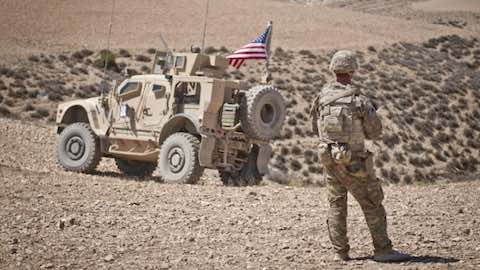 The Islamic State and al-Qaeda still have the capacity to regroup, reorganise and orchestrate terrorist attacks in other parts of the world. Giving these groups breathing space by reducing military pressure is bad news.

When he announced his decision to remove the 2,000 US troops in Syria, US President Donald Trump tweeted, ‘We have defeated ISIS in Syria, my only reason for being there during the Trump Presidency.'

The revelation that he kept US troops in Syria just to counter Islamic State is interesting—because it seems to show that delivering on his campaign promise to his base to bring US troops home has overridden America's other interests there.

Trump seems unconvinced that the US ground presence in Syria is important as part of a broader strategy for countering Iran's agenda in the Middle East, countering Russian influence, containing Syria's President Bashar al-Assad—or even protecting the Kurdish forces in Syria who have been long-term US partners.

But the most obvious observation about Trump's announcement is that Islamic State has not been defeated. It still holds some territory in Syria.

Even more importantly, IS still has the capacity to regroup, reorganise and orchestrate terrorist attacks in other parts of the world. Giving IS breathing space by reducing military pressure is bad news.

We've seen the consequences of declaring victory against durable insurgency and terrorist organisations before. One is the loss of focus in Afghanistan in the mid-2000s as US priorities shifted to Iraq. Al-Qaeda and the Taliban used that time to rebuild and become the strong insurgency we've seen there since.

The most famous example, though, is probably George W. Bush's 2003 ‘mission accomplished' speech about the American victory in Iraq, just as the insurgent violence there was beginning that over time led to the rise of IS.

I'm not sure Trump actually thinks IS has been defeated. He would have had clear advice from the Pentagon, National Security Advisor John Bolton and the US intelligence community (and from other leaders like Israeli Prime Minister Benjamin Netanyahu) that IS is still operating in Syria and can regrow if the pressure is taken off it.

He may just be calculating that other types of US support to counter the IS forces in Syria can still do the job. Trump administration figures have talked about continuing US air strikes, with the forward observer work done by Kurdish militia forces the US has been working with.

What does this mean for Australia and other counter-IS coalition members?

Well, it's probably worst for the US's Kurdish partners in Syria because they're caught between Turkey and Assad and the Russians, as well as facing remaining jihadist terrorist groups including IS. Turkish President Recep Tayyip Erdoğan may take Trump's decision as a licence to intervene in northern Syria to put a buffer between Turkey's border and any territory the Syrian Kurds control.

Without the Kurds, the US would have had no core with which to organise the fight against IS in Syria. Their reward—to be left to deal with Assad, the Russians, Turkey and IS—is not what they deserve.

The troop withdrawal also takes the momentum out of any wider US work with Israel and other regional partners on countering Iran, and it makes a point to the region that Russia, by contrast, is a durable security partner.

No doubt other US administration figures—like Bolton and secretaries Jim Mattis and Mike Pompeo—will be reassuring allies and partners of broader US resolve and contributions. We'll hear quiet emphasis on the fact that the US is keeping its 5,200 troops in Iraq and will still strike IS in Syria from the air.

The hard thing for them, of course, is trying to make this Trump decision look like it is consistent with other US goals—and it's not.

For Australia, I don't think we'll see much change in the counterterrorist and capacity-building deployments we have—either in Afghanistan or in Iraq.

Prime Minister Scott Morrison said during his visit to the Middle East this week that Australia would continue to work side by side with Iraqis, Afghans and our coalition partners to destroy IS and al-Qaeda.

The Trump announcement is bad timing for Morrison because it undercuts the value of his visit to Australian troops in Iraq and makes him have to explain why the 600 ADF personnel in Iraq are staying.

The big picture is that giving IS space in Syria to regroup means there's a higher threat from this transnational terrorist group. And that's bad news for Australia and many other countries.

Trump's announcement also plays into rising debate here about the reliability of the US as an alliance partner, by showing again how transactional and narrowly focused some of his decisions can be.

Michael Shoebridge is director of the defence and strategy program at ASPI. Image courtesy of the US Department of Defence.

"Troops out of Syria: Islamic State, al-Qaeda and Trump's Base All Win"