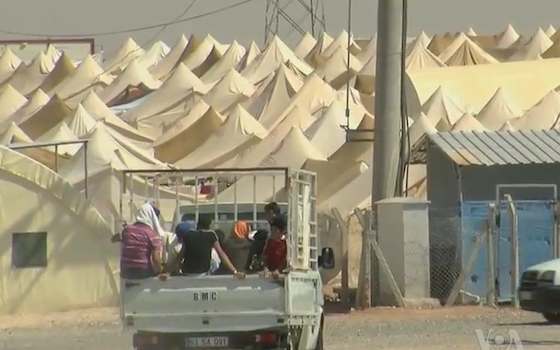 What's the point of intervening in a foreign country under the guise of humanitarianism, or sending aid, if you're just going to end up importing its citizens en masse anyway? Isn't the whole idea to shape up the place so that its people can safely remain there?

The Obama administration is in such an apparent rush to import thousands of refugees from the Syrian crisis -- which will probably go down in history as the conflict featuring the highest number of different Islamist groups fighting against each other -- that it's fretting over how to cut through those pesky anti-terrorism safeguards in order to expedite the do-gooding.

For a hearing on the Syrian refugee crisis earlier this month, of the provided written testimony describing the federal government's refugee vetting process, which includes in-country interviews and security checks that are conducted using intelligence and law-enforcement databases.

American databases are hardly the gold standard for vetting foreign nationals, even when they come from countries where their credit rating or last known address can actually be checked. Groom herself referred to the cases of and , two Iraqi refugees and al-Qaeda members who used their newly granted American freedom in to send weapons, cash and explosives back home.

But, Groom said, "The broad definitions of 'terrorist activity' and 'terrorist organization' under U.S. immigration law are often a barrier to resettling otherwise eligible refuges." She noted that some refugees can run afoul of security safeguards through "routine interactions."

I imagine that would look something like this: You're living in a part of teeming with Islamists. You wave to your jihadist neighbor en route to the bakery, where the jihadist behind the counter serves you a baguette. In return you give him some money -- or as Homeland Security would call it, "material support." Later that afternoon, you get a group of guys together to kick around the soccer ball, but unbeknownst to you, you've just joined the Jihadist Falcons club team. Cry me a river.

I'm not unsympathetic to the plight of immigrants, being a chronic one myself, but there should be zero exemptions to America's already-suspect antiterrorism safeguards, let alone for anyone who's had contact with someone considered even a remote threat to national security. However, Groom testified that there have been more than 16,000 refugee exemptions issued to date by Homeland Security and the , and that the Obama administration is looking to apply the same framework to Syrian refugees. How many of them, exactly? "Several thousand" by the end of the year, according to State Department Assistant Secretary . is trying to resettle an estimated 30,000 Syrian refugees in other countries by the end of 2014.

The potential for domestic terrorism isn't the only concern. Former President administration brought large numbers of Somali refugees to in the mid-'90s to help them escape civil war. Since then, America has continued to welcome thousands of Somali refugees every year. According to the FBI's 2011 National Gang Threat Assessment, Somali gangs "involved in drug and weapons trafficking, human trafficking, credit card fraud, prostitution and violent crime" are active in , and , and present in "at least 30 jurisdictions."

reported in September that the federal government is now "engaging in an aggressive effort to deport Somali immigrants who run afoul of U.S. law," with 3,100 receiving deportation orders since 2001.

U.S. Rep. , a Democrat, expressed concern over these poor dears potentially having to return to a place inhabited by terror groups such as -based Al-Shabaab, which was responsible for the attack on the in , last year. Ellison shouldn't worry too much, though: has been liquidating dozens of Al-Shabaab members with airstrikes in recent weeks. It's just a matter of time before deported criminal refugees can feel safe again.

If the situation remains dangerous, maybe the U.S. government will start importing Al-Shabaab refugees. After all, who's to say that they weren't just hanging out at , buying some new threads and chilling with a Coke, when suddenly firearms dropped into their hands?