Syria: The People Have Lost Their Voice 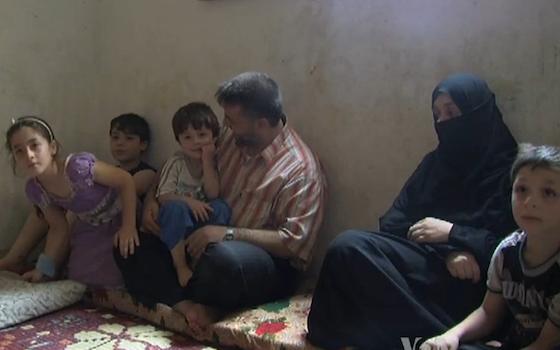 Syria: The People Have Lost Their Voice

I planned to thwart Nemesis in with a faded rebel signature on a dog-eared street map of Grozny.

In the late Nineties I had spent time in the company of Chechen fighters while reporting on both of their wars with , before finally being arrested by federal security service, the FSB, interrogated, and deported with a visa ban that prevented my return.

Among those I had encountered were men who attracted bona fide 'Islamic terrorist' tags to their names. In my mind's eye I can still see Shamil Basayev, one of the architects of the Beslan school siege, grinning wolfishly from the other side of a Grozny bunker as he thumbed his magazines full with bullets while Russian armoured columns rumbled nearby during the winter hell of the first Chechen war; I recall the brooding menace of Khattab, the Saudi militant who became Shamil's right hand man; and I well remember the smell of the burnt Russian crews who cooked in their ruptured tank hulls during the running fights in Grozny's streets.

The signature on my map belonged to another fighter, Aslan Maskhadov, leader of the Chechen independence movement and a man who better befitted the label 'guerrilla commander' than 'terrorist'.

A decade before his death in 2005, I had scrabbled through snow in the dead of night with Maskhadov and his surviving bodyguards, as Russian tanks squeezed the last of the Chechen fighters from their redoubts in Grozny. Two years later, I met him in Grozny again as his fighters recaptured swaths of the ruined city. We next encountered one another in the second Chechen war, as Grozny again became a battlefield. Somewhere amid it all, he marked the high and low points of our meetings on my map. Tight circles denoted his last stands; sweeping arcs his victories. And he signed it, smiling, but only briefly, for Russian armour was nearby again.

I kept the map. It travelled with me again two years ago when I began to report on the Syrian civil war. Given the cult status of Chechen militants among rebels, the growing number of fighters there belonging to Al-Qaeda's affiliate ISIS -- the Islamic State of Iraq and al-Sham -- and the prominence of Chechen volunteers within the rebel movement, that map seemed a sensible asset: ballast against the day that foreign fighters might detain me.

'I know your kind', I could tell them, and open up the map. 'I've crawled through the snow with Maskhadov; I've been interrogated in Russian jails; I've seen Basayev in action: I've met Khattab'.

Came the day. It was . A Friday. On a road in northern two young Al-Qaeda fighters, Iraqis, apprehended my car. They were soon joined by others. One wanted to shoot me as a spy. The rest wanted to take me away and put me on trial in their Islamic court. ISIS had a general order to capture Western reporters by then. So I thought I was done for.

The map was in my pocket. Yet I didn't reach for it. Just one look at the lapidary loathing -- utterly implacable and as polished, simple and unyielding as a pebble on the beach -- in the eyes of those young men told me all I needed to know about my plans to find common ground with a map signed by yesteryear's Islamic militants: forget it.

Fortune did not completely abandon me. I had another contingency plan that day. It would be crass to reveal the details here, suffice to say that some influential Syrians to whom I am eternally grateful negotiated my passage out of what seemed like a certain abduction scenario.

But I never went back. After 13 visits to northern , and an intense emotional and professional investment in the story, I simply stopped going. The ascendancy of Islamic radicalism and the terrible rate of abduction among the small cadre of reporters who ventured into the rebel zones meant that I could no longer justify the risks. The aim of any war correspondent is to survive and report. In after my Friday 13th encounter with ISIS, I no longer saw that aim as achievable.

A few days prior to the incident, Marc Marginedas, a Spanish correspondent, disappeared near fourth city, Hama. The veteran Spanish reporter was seized by ISIS along with photographer only days later. Four French reporters, including an old friend, , were abducted in two separate incidents in June and July.

In , a three-man team from Sky News Arabia were captured near Aleppo. A month later two Swedish freelancers were also abducted. American journalists and another friend, , had been taken much earlier, seized in different locations in 2012.

This is not the full tally. At least two other experienced Western reporters are missing, their identities masked at their families' request. Eight foreign reporters have been killed since the war began in . The last, the experienced Iraqi cameraman , was murdered by ISIS in December after being stopped at a checkpoint near the Turkish border.

Since then, the flow of foreign journalists into rebel-controlled areas of the country, never more than a dribble, has stopped altogether.

It would be reassuring to believe that our absence from rebel zones in the most important conflict of the age somehow matters. Many believe it does not.

A war without real people

, the photographer wounded beside The Sunday Times reporter when she was killed in Homs, has said: 'I can't think of a single photo I could take at this moment in time that would increase public awareness.'

It is a chilling observation from an experienced man who clearly believes that the Syrian revolution is a lost cause, and that nothing there could be filmed, photographed or written about that could better inform the British public.

Yet I would argue that public awareness, rather than be increased, needs constantly to be refreshed and updated of change, and that the absence of journalists from opposition areas in has not only resulted in the ossification of our perception of the war, but also handed a golden card to the regime.

Even before the autumn zenith of ISIS, which gave President Assad the enemy he had always wanted -- that most feared by the West -- the regime were spinning a PR campaign that was much more effective than anything the divided opposition could muster.

With a targeted approach that included stories on the phantom 'sex jihad' that supposedly allowed teenage Muslim women to satiate scores of frustrated foreign fighters; hoax claims of Saudi death row inmates released to fight in ; and the abundance of false stories on the persecution of Christians by the rebels (although a core of accurate accounts existed), the regime was a master in sowing confusion and doubt through the manipulation of information.

Though it failed to mask its most heinous crime, the gassing of hundreds of civilians in the suburbs last August, it made a good attempt. A detailed yet unlikely deception story blaming Saudi terrorists for the gas attack, later debunked as fraudulent, was released by the regime via a US conspiracy website within days of the atrocity. It was momentarily picked up by some Western media outlets, became the preferred narrative of and , and was believed by an influential British general, who should have been better informed. Much of the doubt it caused still lingers.

Ever since, scarcely able to conceal its delight at being made the linchpin in the plan to divest itself of chemical weaponry, thereby guaranteeing its survival at least for the mid-term, the regime has eased the restriction on visas to Western reporters. Meantime the rebel zones have become correspondingly barren of journalists, their presence extinguished by the abduction campaign.

The ensuing conflict has become a 'war without real people' in the eyes of most westerners, who now regard the Syrian civil war as an Alien vs Predator-type contest, complete with severed heads, flayed skins and bitten hearts, in which Al-Qaeda competes with the regime as centre stage for Western fears. They seem to be winning. The regime, for all its ruthless and blood-soaked cruelty, is beginning to look the lesser of two evils in the eyes of foreign nations.

In the fallout, , the US Secretary of State, is struggling to gain any traction in having the regime cease the air bombardment of Aleppo that has killed more than 600 civilians since mid-December, or open corridors for humanitarian aid to pass through to starving communities besieged by the regime.

Both demands were seen as a confidence-building measure in the run-up to the 2 peace talks. Meanwhile, in the course of one fortnight, more than ten times the number of people have died in clashes between rebel groups trying to oust ISIS from their midst than have been killed in western since ISIS recaptured on . Yet we know next to nothing of the fight's true details or origins.

Does anyone care anymore? President Obama now rarely mentions , except to express his pleasure at the progress made by the plan to remove the regime's chemical weapons, despite the fact that Assad's cooperation undermines the US wish for him to leave office -- the central aim of 2.

The millions of Syrian civilians, the nation's appalled majority, have had their voice effectively stolen by the absence of journalists. It is their word that is the most powerful in reminding the world of what is truly being lost in post-revolutionary war; it is they who should toll the bells to forgotten conscience.

I mean this quite literally, rather than simply mouthing sugary sentiments about the honour in bearing witness. The most powerful man I ever met in was a 27-year-old car mechanic named . Gassed by a regime sarin shell that had bounced down his stairwell in Aleppo in April last year, killing his wife and children months before the large scale gas attack in , Yunis's detailed testimony -- backed by samples taken from the attack site and tested in Porton Down -- went around the world, throwing down the gauntlet to Obama, challenging the presidential will behind the 'red line' threat made earlier to Assad over the use of chemical weapons.

This one man's experience of a life carelessly ruined between a regime few liked and a rebel force few invited epitomized that of the Syrian everyman. His voice was pure and his intent innocent. By speaking to a journalist he indirectly spoke truth to power and revealed the US threats as empty posturing.

It would be an even greater shame if through the absence of independent reporting in , we now choose to forget such people exist, normal Syrians, and believe instead the cardboard cut-out image of a war fought between rebel thugs, extremist hoods and regime goons.

is special correspondent for The Times

"Syria: The People Have Lost Their Voice"