Russia is Withdrawing from Syria and the U.S. Should Follow Suit 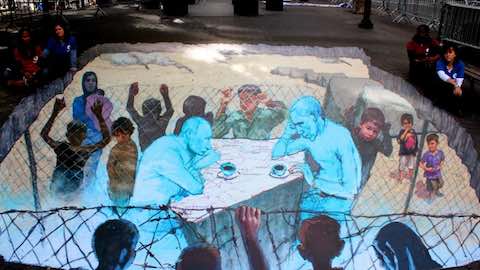 Russia is Withdrawing from Syria and the U.S. Should Follow Suit (Photo: Oxfam International)

For too long Russia and the United States have tried to out-muscle each other by escalating the Syrian war. Now, for once, they've got a chance to escalate their efforts to end it.

In a surprise announcement, Russian president Vladimir Putin announced that the Russians were withdrawing “most of our military” from Syria beginning immediately.

According to the TASS news agency, Putin said he hoped the withdrawal “will become a good motivation for launching negotiations” and “instructed the foreign minister to intensify Russia's participation in organization of peace process in Syria.”

The withdrawal, along with Putin's restated support for a political settlement, could help move forward the fragile UN-brokered Geneva talks on ending the Syrian crisis that began on the same day -- as well as the tenuous UN-negotiated cessation of hostilities. “Those Russian servicemen who will stay in Syria will be engaged in monitoring the ceasefire regime,” TASS reported, indicating that the pilots and crews of the 50 Russian warplanes and helicopters that have been based in Syria would be withdrawn.

The withdrawal is an important step that should help reduce the level of violence in the deadly war. But questions remain.

Putin made clear that not all Russian forces would be withdrawn, and that Russia's airbase near Latakia, as well as Moscow's small but symbolically important naval base at Tartus on the Mediterranean coast, would remain open -- though they “will operate in a routine mode.” Putin said the two military bases should be “protected from the land, from the sea, and from air,” leaving open the question of whether Russian bombers “protecting” them might also continue bombing raids in Syria, flying from outside Syrian borders.

The Syrian conflict is simultaneously a civil war -- pitting a brutal government against a multitude of political and military opposition forces -- and a proxy war in which a host of outside powers are fighting for various regional and global hegemonies. And all of those overlapping wars are being fought to the last Syrian.

The reduction of Russian military attacks in Syria, along with Putin's renewed call for greater Russian engagement in the peace process, may set the stage to reduce, though certainly not end, the proxy war component of the overall conflict.

A real reduction of violence, a durable ceasefire, and a viable peace process leading to an end to the Syrian war will require much more -- more from Russia, certainly, but even more from the United States and its allies. There’s no indication yet that Russia's move was coordinated with Washington, although White House spokespeople indicated that a Putin-Obama talk might be possible.

In the meantime, Washington should follow Russia’s lead and pressure its own proxy forces to shift towards diplomacy. The withdrawal of U.S. troops, special forces, drones, and warplanes from Syria, paralleling the Russian move, would be an important first step. Further moves must include an end to both the CIA's and the Pentagon's programs to train and arm rebel forces in Syria. Finally, the U.S. should pressure its regional allies to stop arming Syrian opposition forces, which could also keep those U.S.-supplied arms out of the hands of ISIS and the al-Qaeda-linked Nusra Front.

All of those moves would, like the Russian withdrawal, reduce the proxy war raging in Syria -- and give Washington greater leverage to urge Russia and Iran to go even further and stop arming the Syrian regime.

For too long Moscow and Washington have tried to outmuscle each other by escalating the devastating Syrian war. Now, for once, they’ve got a chance to escalate their efforts to end it.

"Russia is Withdrawing from Syria and the U.S. Should Follow Suit"