Overcoming the 'Manufactured Crisis' with Iran 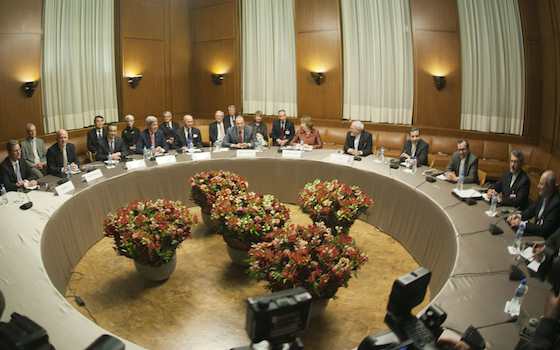 Overcoming the 'Manufactured Crisis' with Iran

Gareth Porter's new book chronicles U.S. and Israeli efforts to ensure the perpetuation, rather than the resolution, of outstanding concerns about Iran's nuclear program

Negotiations began in Vienna between Iran and the P5+1 countries (the five permanent members of the United Nations Security Council and Germany) to reach a comprehensive deal on Iran's nuclear program after a decades-long standoff. Following the conclusion of this preliminary round of talks, which are set to resume in mid-March, the International Atomic Energy Agency (IAEA) offered a welcome assessment for those seeking to resolve the impasse. In the quarterly report to its board of directors, the nuclear watchdog verified that Iran's stock of 20-percent enriched uranium had decreased to 351 pounds (significantly less than the 550 pounds needed for one nuclear weapon) from its 431-pound inventory of last November.

Iran's cessation of enriching uranium to 20 percent, along with its agreement to more intrusive inspections by the IAEA, formed the cornerstone of an interim deal signed last fall between the P5+1 and Iran, which resulted in Iran receiving some limited relief from the crippling sanctions imposed on it by the United States.

The IAEA's report of Iran's compliance with the November agreement has certainly raised hopes of a successful denouement to this prolonged impasse. But Gareth Porter, author of the fascinating new book Manufactured Crisis: The Untold Story of the Iran Nuclear Scare, published this February by Just World Books, is less sanguine about the possibilities for a breakthrough.

In a recent Inter Press Service article, Porter notes that White House spokesperson Jay Carney recently insisted that Iran also has "to deal with matters related to their ballistic missile program" in these nuclear negotiations, even though this issue was not part of the interim deal signed last fall. The new demand, Porter concludes, is an Israeli-inspired monkey wrench thrown by its lobby -- the American Israel Public Affairs Committee (AIPAC) -- to derail the talks.

-- will immediately recognize this U.S./ Israeli bid to include ballistic missiles within the framework of nuclear negotiations. As Porter points out, it is the continuation of a well-honed strategy to continuously add layers of demands on Iran to prevent the finalization of a deal to ensure that its nuclear program is for peaceful purposes only.

By delving into the nitty-gritty details of IAEA reports, combing through diplomatic cables revealed by WikiLeaks, interviewing former key U.S., Iranian, Israeli, and IAEA officials, and doing the type of good old-fashioned investigative reporting he properly excoriates most of the mainstream media for avoiding, Porter unravels a complicated, sordid tale in which the United States and Israel -- sometimes separately and sometimes symbiotically -- act to ensure the perpetuation, rather than the resolution, of outstanding concerns about Iran's nuclear program.

U.S. intelligence concluded in its 2007 National Intelligence Estimate that "the Iranian government had halted all work on nuclear weapons in 2003," an assessment based largely on electronic intercepts, according to Porter. And since that time, Porter determines, the only purported evidence of Iranian intent to weaponize its nuclear program has come from fabricated documents either delivered directly by Israel to the IAEA, or indirectly by Israel through the Mujahideen-e Khalq (MEK), an Iranian opposition group delisted by the State Department as a terrorist organization only in 2012.

Why, then, does the United States persist in divining a malign intent to Iran's nuclear program? The answer is multi-faceted, according to Porter. Part of the answer lies in the clandestine nature of Iran's nuclear program, a posture ineluctably adopted after the Reagan administration aggressively denied Iran access to nuclear technology permitted to it as a signatory of the Nuclear Nonproliferation Treaty (NPT). Also, Porter recounts that in the post-Cold War environment, intelligence agencies justified their budgets by pointing to the threat of weapons of mass destruction (WMD) proliferation and, in the process, created a built-in incentive to assume worst-case scenarios. And, of course, there were the neoconservative ideological proclivities of the George W. Bush administration, which infamously deemed Iran to be part of an "axis of evil" and overtly sought regime change in Tehran, a stance that "perversely" skewed U.S. policy "toward provoking Iran to accelerate its enrichment program," writes Porter.

But perhaps a more important factor in understanding U.S. policy toward Iran's nuclear program is the influence wielded by Israel through its lobby, AIPAC. Porter traces this process back to the Clinton administration, when National Security Council staffer Martin Indyk, a former Israel lobby employee, formulated the "dual containment" strategy of sanctioning and isolating both Iran and Iraq -- a "harsh, new U.S. policy," Porter notes, "driven by Israel's ability to manipulate American politics through its powerful domestic lobbying arm." AIPAC's lobbying for sanctions and war against Iran continued through to the Obama administration, which both acceded to its demands to impose harsh new sanctions on Iran's banking and oil sectors and continued to threaten the use of force against Iran. At the same time, however, Obama staunchly resisted incessant Israeli pressures to drag the United States into war.

Israel has engaged in near-apocalyptical warnings of Iran's supposed imminent intent and capability to develop nuclear weapons since the early 1990s, when Israeli Prime Minister Yitzhak Rabin invoked "an extraordinary new threat from Iran" for the "immediate domestic political objective" of "providing political cover for Rabin's moves for peace with the Palestine Liberation Organization," according to Porter. But if Rabin's warnings were meant to convince the Israeli public of the need to come to terms with the Palestinians to focus on a supposedly greater threat, then current Israeli preoccupations with Iran's nuclear program are designed with the opposite effect in mind: to divert the attention of the international community from the failed "peace process" and Israel's ongoing, illegal colonization of Palestinian land. It's no coincidence that Israeli demands that the United States green light an attack on Iran intensified after the failure of short-lived, U.S.-brokered Israeli-Palestinian negotiations in fall 2010.

Current Israeli Prime Minister Benjamin Netanyahu will bring a similar agenda to AIPAC's annual policy conference and his meeting with President Obama in early March. Members of Congress attending AIPAC's conference who will wildly applaud Netanyahu's bellicosity, rejection of international diplomacy to resolve the standoff on Iran's nuclear program, and advocacy for more sanctions on Iran would do well to read Gareth Porter's book. If they do, they will learn that the U.S. policy objective "to ensure that Iran cannot obtain a nuclear weapon and that its program is exclusively peaceful," as stated recently by Under Secretary of State for Political Affairs Wendy Sherman in Jerusalem, is well within reach. But this will happen only if the United States acts in good faith and in its own interests -- rather than those of Israel -- in the negotiations to resolve outstanding concerns on Iran's nuclear program.

Manufactured Crisis: The Untold Story of the Iran Nuclear Scare

"Overcoming the 'Manufactured Crisis' with Iran"