Only Pope Francis Could Go to Arabia 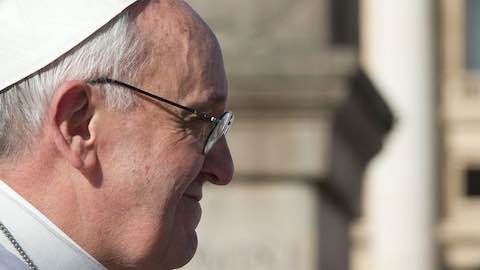 The Pope's visit to the United Arab Emirates signals that the Gulf states have much to gain and little to lose from aligning themselves with the West.

About 800 years ago, St. Francis, the namesake of today's Pope, unexpectedly met with the Sultan al-Malik al-Kamil, somewhere in the outskirts of the siege of Damietta. That the two grew to respect each other, and this respect became the basis of an inter-religious dialogue, is the stuff of religious lore. And many have drawn that parallel to the visit of Pope Francis to the United Arab Emirates this past week. The religious geopolitics of the Arabian Peninsula are hardly less fraught than they were in Francis' own day, and the results are perhaps just as mystifying. Moving in parallel is the calcified inequity of the UAE, a state that is nonetheless celebrated for its progressive tolerance, an emerging religious alliance against extremism of many kinds, with Yemen ever present in the background, and against all of this an unusual inter-faith declaration on Human Fraternity.

The United Arab Emirates has moved decisively to signal its progressive position in Arabia. Its invitation of the Pope comes after a series of labor protections in 2017, its adoption of a Minister of Tolerance, and a declaration of 2019 as the Year of Tolerance. Yet for all of this effort, some analysts have asked whether this is not a Potemkin village of tolerance, erected to impress an attention-deficit global elite, but passing as quickly as it has come without permanent redress of its gross inequalities. Indeed, of the UAE 9.5 million inhabits, only a mere 1.5 million are citizens, almost all Muslims. The other 8 million are Christian migrant workers. They have no citizenship. Their residency depends on their employers, and those employers periodically make international headlines for operating a system of indentured servitude. They have no power, and almost no rights.

Any papal visit in such a land is bound to stir up controversy. When the Pope celebrated a Mass, it was the largest gathering of Christians in the history of Arabia. Employers provided leave, the state arranged buses, even the state broadcaster televised the Mass. Estimates are that nearly 150,000 people attended, from 100 different nationalities. The Pope and the Grand Imam of Al-Azhar, Ahmad Al-Tayyeb, blessed the foundation stones of a mosque and a church, before the Mass. They gave a joint statement calling for full citizenship rights and rejecting "the discriminatory term minorities."

On its own, this is historic. As Graeme Wood put it at The Atlantic, many will remember

... that by inviting a Christian idolator to perform sorcery [the Mass] on the peninsula of the Prophet, Abu Dhabi took a step away from Islamists, a step that cannot really ever be taken back.

Is this, then, a turning point? It may be, but if so it is turning point in the Islamic world as much, or more, than it is of dialogue in Christian-Muslim relations. It signals that the Gulf states have much to gain and little to lose from aligning themselves with the West, turning decisively against Islamists who have now long since turned against them.

The UAE is happy, for example, to tolerate the Pope's criticisms of the Saudi coalition's war in Yemen, because that tolerance has a low price. The Pope's presence, a willing collaboration against religious extremism, is the key feature. The War in Yemen is executed on exactly those grounds in the coalition's imagination, saturated as it is by not only extremist Sunni groups (al-Qaeda) but also by the Houthi Shiites, whose Iranian masters loom ever large in the background for the oil rich Arab kingdoms. Even the normalization of relations with Israel, an unthinkable act elsewhere on the peninsula, is part and parcel of a specific geopolitical program to contain Iran, and cut-off the extremism that threatens the oil-rich bargain that bought peace on Arabia for nearly a century.

Is it hypocrisy then, as some argue, to read such a beautiful, document on "Human Fraternity: For World Peace and Living Together" from a regime collaborating to perpetrate one of the greatest humanitarian catastrophes in the new millennium? The UAE happily coexists, and itself is part of a system, that outlaws conversion from Islam, whose state has a clear religious foundation, on the grounds of which apostates and blasphemers are frequently punished, even with death (see Daniel Philpott's Religious Freedom in Islam). If this is "living together" it is a rather uneven state of affairs. If this is dialogue, dialogue under what conditions? Religious minorities, Christians especially, are a deeply politically and religiously disempowered majority, bent under a financial system which exploits and discards them.

So it is with many diplomatic documents, and so it is with many first steps, its defenders argue. Francis' diplomatic strategy has always been finding an area of common ground, however small, and building trust in order to open larger conversations. But does there come a point, Robert Nicholson asks, where common ground is too overstated, and difference should be not the burden to suppress, but the fount from which dialogue flows? That the Pope and the Imam can agree on the violence of religious extremism seems true, if geopolitically convenient for the Gulf states. But the criticisms in the same document of decadent materialism land softer, or hardly at all. The "spiritual and religious maladies that are caused by a prevailing materialism" is a good, brief review of the Islamist perspective on piety in the UAE.

The details are perhaps, as Graeme Wood argues, less important ("I feel certain the details of the document have already been forgotten" he writes). The values are too bland, too unchallenging, and so effortlessly ignored. But of the two great social evils that "Living Together" signals, religious extremism and materialistic thinking, it is easier to imagine a genuine alliance on the former, and very little passion for the latter. It is death of a century-old oil alliance with extremism in the Peninsula that this event signals, less a new day in Christian-Muslim dialogue. That is short hope for the many existing religious minorities in Gulf societies, but we, along with the Francis of old, can at least imagine such a shift. As old, oil alliances come apart, new tolerances better fitted to their sparkling skyscrapers and artificial islands may emerge. It may be, in the age to come, that the exploited Christian-minority guest-workers of the Gulf will continue to enjoy exploitation for entirely non-religious reasons.

Robert J. Joustra is Associate Professor of Politics & International Studies, and author and editor of several books on religion and politics, most recently Modern Papal Diplomacy and Social Teaching in World Affairs (Routledge Studies in Religion and Politics)

"Only Pope Francis Could Go to Arabia"