Obama Firm: No Boots on the Ground in Iraq 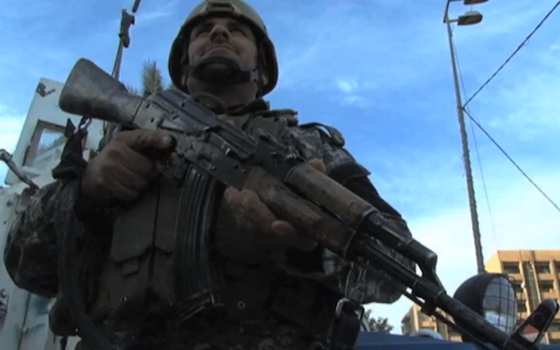 Obama Firm: No Boots on the Ground in Iraq

The U.S.-financed and trained Iraqi army of Prime Minister has had to scramble to regain control over of the once-liberated Anbar province against the latest incarnation of the al-Qaida terrorist menace. Not surprisingly, the call has gone out from the Maliki regime for Uncle Sam to come running to the rescue again.

But President Obama, who labeled the 2003 American-led invasion of "a dumb war" and finally extricated U.S. combat troops from it in 2011, has agreed only to dispatch more missiles and other weapons, and authorized drone surveillance over the embattled region.

Pointedly, Secretary of State , currently occupied in the fanning the embers of the Israeli-Palestinian peace process, says there will be no American "boots on the ground" in . "This is a fight that belongs to the Iraqis," he said Sunday. "We are not contemplating returning. We will help them in the fight, but this fight, in the end, they will have to win, and I am confident they can."

Nevertheless, that parts of Anbar province, supposedly stabilized after the heavy cost of American lives from 2005 to 2008, were again under control of a new al-Qaida offshoot adds to Obama's woes. Surviving family members of Americans lost or wounded there understandably will question the sacrifice suffered.

The development will also renew choruses of we-told-you-so from conservative critics of the Obama withdrawals from and the one underway in , branding them woefully premature. But various public opinion polls have clearly established that the American people are fed up with U.S. military entanglements abroad.

Yet the world at large is not very accommodating to Obama's aspirations to fulfill the late plea that America "come home" and attend to all her domestic ills. So Kerry's assurance of "no boots on the ground" again in is a political necessity if not the moral imperative right now.

Still, as long as is not only the surviving superpower in a world without a but also professes to be its prime champion of freedom from oppression everywhere, it cannot walk away either. There remain too many outbreaks of violence erupting in various trouble spots around the globe.

That is the military and moral dilemma that faces all modern American presidents. But it seems particularly to weigh on Obama now as he struggles to address his own domestic and foreign agendas, blunted at every turn by current realities.

Pinned down at home by the chaotic rollout of Obamacare, he still tries to restore American foreign policy abroad to the collective action against military threats that ended World War II and the Cold War.

Obama rather shockingly won the 2009 Nobel Peace Prize more for his good intentions than for any concrete achievement after only a year as president. Little recognized at the time was his determination to pivot from the unilateral course of the George W. Bush years.

Since then, the Obama foreign policy has been marked by a caution that critics have called "leading from behind," as in . There he also ruled out American "boots on the ground" but provided material in the effort that ousted dictator Moammar Gadhafi.

Subsequently, after going to the brink of unilateral military action against last year over its use of chemical weapons, the president elected first to seek approval, and to general public surprise achieved agreement to surrender those weapons without war.

Kerry's latest statement that the administration is not "contemplating" sending American troops back into is yet another indication that Obama is determined, in his remaining three years in office, to stay on the course of restoring a less militant posture to the nation's foreign policy.

If he can do so, the achievement will likely make the award of the Nobel Peace Prize to him more understandable, and more justifiable, to critics at home as well as abroad.

"Obama Firm: No Boots on the Ground in Iraq"