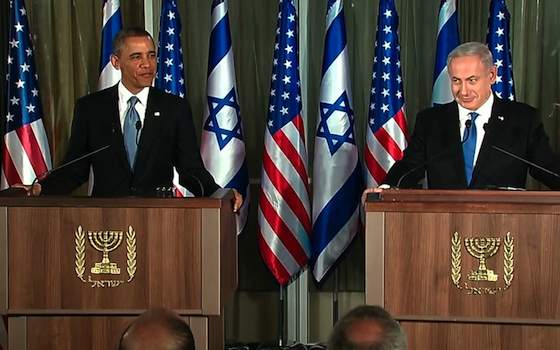 The merciful death that has, at last, been administered to Secretary of State foredoomed Israel-Palestinian settlement talks has been greeted by little beyond silence in the international community.

Anyone possessing a modicum of reason knew that the effort was a waste of time so long as Mr. Kerry was incapable of bringing to the talks a changed position on the part of the Obama administration. Without that, and so long as Benjamin Netanyahu remained prime minister of , and the character of the Israeli government remained unchanged, the Jewish state remained, and will remain, locked into self-destruction.

The suicide will probably be lengthy and agonized, accompanied at some point in the future by return to armed struggle, as Zionist Israel again tries to destroy whatever entity or community that is the successor to the present Palestinian state, as presently recognized by the . Palestine's existence, where it is, as it continues to exist, will increasingly become morally, as well as strategically, insufferable and unbearable to .

could spare this terrible outcome, as I will argue, but the insolence of the Netanyahu government towards the American ally which has empowered survival, prosperity and progress, and connived in oppression of its Palestinian victims, has clearly inspired in President Obama a profound hatred and contempt toward Netanyahu and his fellow-aggressors, who choose the eventual destruction of itself for reasons of their own advantage, and to satisfy the blind and deaf fanaticism of the settlement movement.

The best in -- the people (so few it seems) -- who grasp what their fellow citizens are doing to , are begging and the West Europeans (from among whom came those, who in another century, were responsible for the infamy inflicted upon the Jews of ), to save them today.

How? I will quote one of the most important and influential Israeli journalists, , writing in the newspaper :

"The two-state discussion must now become a discussion of rights: Dear Israelis, you wanted an occupation and the settlements -- knock yourselves out! Remain in Yitzhar, dig yourselves into the mountainside and build to your hearts' desire in Itamar. But you absolutely must grant full rights to the Palestinians living alongside, exactly the same rights that you enjoy.

"Equal rights for all; one person, one vote -- that should be the message to the international community. After all, what could say to this new message? That there cannot be equal rights because the Jews are the chosen people? That it would endanger security? The excuses would quickly run out, and the naked truth would come to light: that in this land only Jews have rights. Such a message cannot go unchallenged.

"At the same time, the entire [foreign] approach to must be changed. As long as it does not pay the price of the occupation and its citizens go unpunished, they will have no reason to end it, or even to deal with it. The occupation is deep inside the Israeli closet. There is no one to out it; the overwhelming majority want it to remain inside.

"For this reason only punitive measures will remind us of its existence. Yes, I mean boycotts and sanctions, which are greatly preferable to bloodshed.

"This is the truth, even if it's bitter. America and have kowtowed to enough. Unfortunately, to no effect. From now on, the world must speak a different language and perhaps it will be understood. After all, has proved, more than once, that the language of power and punishment is its main language."

thus speaks to his compatriots with force and determination -- and to us. is what it is today, and the Palestinians are where they are, in part because of the Israeli government's exploitation of its foreign allies, collaborators and enablers, as well as foreign politicians who have been willing recipients of its bribes, distorting or concealing the truth about a situation that is, to moral man, as Levy says, "unthinkable."

and cannot be content with boycotts and sanctions. must stop its non-military aid to , and end its complicity in oppression of the Palestinian people and continuing illegal seizure and occupation of Palestinian lands. It must cease its unconditional support for at .

It should instead support full Palestinian membership in the UN and in the International Criminal Court, and such claims as the Palestinians may make in that Court against injustices and crimes committed against them. It should make unmistakably clear to the Israelis that restoration of their country's alliance with , and of their associations with a that follows course of "power and punishment" directed at , awaits the day when justice is restored in that country's relations with the Palestinian people.