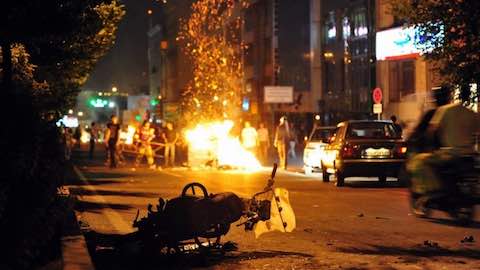 Trump and the Neocons are exploiting an iran protest movement they know nothing about. Iranians are protesting conditions worsened by United States policies, but Washington's hawks see only an opportunity for regime change.

One and only one Western head of government was present, joining ten African presidents. One and only one foreign leader was asked to speak at the celebratory lunch, while being seated next to Kenyatta.

Who was that? Israel's Prime Minister Benjamin Netanyahu. And while in Nairobi for one day, Netanyahu met with the presidents of Rwanda, Gabon, Uganda, Tanzania, Zambia, South Sudan, Botswana, and Namibia, and the prime minister of Ethiopia.

The prominence of Israel's leader during this occasion would be worth mention even if he were one of a dozen Western leaders who were present -- but he was alone. The British sent a second level minister handling foreign aid, for example, not even a Cabinet member.

There are two points worth making. The first is that Trump and the Neocons are exploiting an iran protest movement they know nothing about. Iranians are protesting conditions worsened by United States policies, but Washington's hawks see only an opportunity for regime change. The second is that this is no automatic development, but a tribute to the energy, dedication, and perspicacity of Prime Minister Netanyahu. They aren't just welcoming Israel; they are welcoming him. They are interested in his extraordinary country, obviously, but also in his personal understanding of economic change, of the role of military strength, and of world affairs. Similarly, in September 2016 Netanyahu was a hotter ticket at the UN General Assembly than even Barack Obama: more African leaders sought meetings with Netanyahu than with the President of the United States.

Netanyahu's critics are legion in Israel, but even they ought to be honest enough to acknowledge what he has achieved for his country in countering isolation, BDS, and anti-Semitism and greatly widening and deepening Israel's global ties.

And it has just been announced that Netanyahu has been invited to address all 28 EU foreign ministers at their December meeting. QED.

Photo: Turkish soldiers stand guard outside the Silivri Prison and Courthouse complex during the trial of 17 writers, executives and lawyers of the secularist Cumhuriyet newspaper in Silivri near Istanbul, Turkey (REUTERS/Osman Orsal)