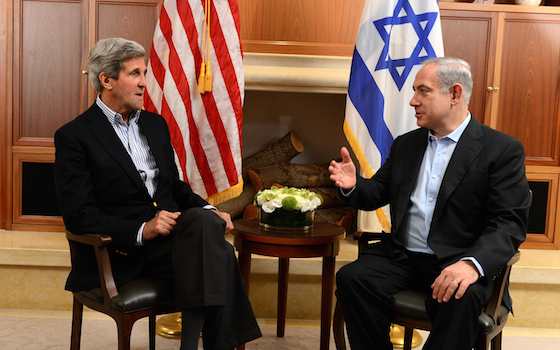 The US National Security Adviser to President Carter, who helped broker the Camp David Accords, discusses Syria, Iran and Israel

After his spectacular, but predictable, failure to move forward the "peace process" between Israel and the Palestinian side, Secretary of State says will now "evaluate" its role in the .

Let me help: The peace process in the isn't working and it can't work when one side -- that would be the Palestinian leadership -- has no intention of settling for anything less than their ultimate goal of removing the Jewish people from the region.

Kerry's cynical ploy suggesting that convicted Israeli spy could be released from prison in exchange for even more Israeli concessions was another indication of how desperate he is to get something -- anything -- to work.

The Palestinian side, indeed the entire Arab and Muslim world, watch this and can only conclude that America is weak and lacks resolve. And they would be right to think so. If anyone can define American foreign policy in the or anywhere else, please write me.

So much evidence over so many years should prove to anyone who is not in complete denial what the Palestinian side seeks. It is the destruction of Israel, which they believe is their divine mandate. Diplomacy has yet to be developed that can overcome an edict from "God" who commands the eradication of his "enemies." How do American and Israeli diplomats, who are regarded by fundamentalist Muslims as "infidels," negotiate with such a mindset?

Duplicity is an ancient tradition in the . The history of the region is full of examples of Arabs and Muslims saying one thing to the West and something quite different to their own people.

The latest example of this doublespeak comes by way of the (MEMRI), a nonprofit press monitoring organization based in , Palestinian Authority President recently told Israelis visiting that he did not wish to flood Israel with Palestinian refugees and their descendants. "That is nonsense," said Abbas, "and what was written in the Israeli press is untrue."

When Abbas spoke to a Palestinian audience, notes MEMRI, he said, "The right of return is a personal right. No country, authority, organization, or even (Abbas's other name) or (other) leaders can deny anyone of his right."

What about that vaunted "two-state solution" Kerry and those who have gone before him think is the holy grail of peace? The Palestinian side pays lip service to the notion when speaking to the West, but tells its own people it favors a one-state solution without Israel.

On , according to MEMRI, Abbas told an Israeli audience that would not be divided in any future peace agreement, but would have two municipalities with an appropriate coordinating body."

To Palestinians, however, Abbas promised: "Occupied Jerusalem is the capital of Palestine, since without it there will be no solution. No one is authorized to sign (such an agreement)." He added, "Without East Jerusalem as Palestine's capital there will be no peace between us and Israel."

There are many more examples of such doublespeak, so many they could fill a book, but you get the point. Too bad Secretary Kerry, President Obama and numerous presidents and secretaries of state who have gone before, don't.