Isolationist Instincts of Americans are Sound Ones 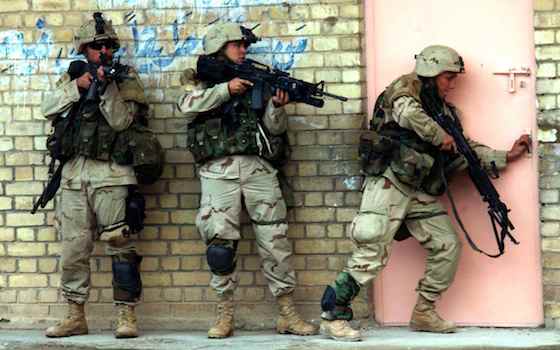 Isolationist Instincts of Americans are Sound Ones

The and the International New York Times had the same front-page headlines recently. Both had to do (as the Times put it) with the "Power Void" in the Mideast, deploring that America's decade of attempting to create a new order in the region now is blowing up in its face.

It was just a decade ago when U.S. troops razed , leaving it, as a Marine officer put it to a journalist, "like Dresden" -- referring to the colossal firestorm that Allied bombers created in that German city in northern in 1945, in the worst single massacre in during the second world war.

The comparison with what happened to has to be exaggeration, as had a population of only 350 thousand to begin with, whereas Dresden had added to a prewar population of some 650 thousand many refugees from the Soviet offensive in the East. just looked to the Marine like pictures of Dresden in 1945. That was not a coincidence.

The original attack on , in 2004, followed the murder by a mob of four Blackwater corporation mercenaries escorting a supply convoy. The mob burned the bodies and hung them from a bridge. The American attack followed just a year later, to expel jihadists from the city and 'teach a lesson.'

The black flag adopted by al Qaeda and its allies has flown over , and again civilians have fled the city in fear of its complete takeover and destruction, this time by radical Sunni forces, fighting the Shiite-dominated Iraqi government of Prime Minister , originally put in place by the American occupation.

What would they have done in this situation? Called in U.S. reinforcements to go to ? That would have started up the American war in again, but much worse, because fighting in now is not between Arabs and imperious foreigners with half-baked ideas about remaking what they chose to call the .

This has now cast itself into a sectarian civil war. Al Qaeda, or the Islamic State of Iraq in the Levant, as it and its associates now choose to call themselves (ISIS), has support from and , the two activist Sunni states that see a threat of regional domination by , allied with Shiite Hezbollah in , close to the Shiite government of Prime Minister Malaki, and supporting Bachar el-Assad's , now seemingly in the ascendance over the Syrian insurgents backed until now by the West.

And where do and stand in all this? Neither of them is quite sure. Yet it was the two of them that destroyed the stability that once existed in the region by deciding to destroy Saddam and his Ba'ath regime. He ruled a population which was in majority Shiite but had just defeated Shiite Iran (with a little help in the way of arms and satellite intelligence from the U.S., in revenge for the Iranians having taken American diplomats hostage after the Ayatollahs' Revolution in 1979.) However, that was an incidental episode in policy. The big thing was that Saddam was the object of neoconservative hatred. He was opposed and feared by as leader of the most powerful Arab state. It was decided to take him out. A great mistake. That this also put the Shiites in seems not to have been noticed.

The influential Israeli insiders' newsletter, DEBKAFiles, wrote recently that Sunni enemies have "come together for a mighty push to seize footholds in a vast swathe of territory, along a line running between , and . Al Qaeda is turning itself into the Sunni knife for slicing through the Shiite axis linking to and the Lebanese Hizbollah. Our military sources say a major escalation of violent confrontation is building up,...and there may be a spillover into and ...."

The letter goes on: " finds itself caught between two equally hostile and dangerous radical forces, both of which enjoy powerful backing. On the one hand the Obama administration is eager to maintain the U.S rapprochement with to the point of backing the brutal to remain in power. On the other hand, former U.S. ally is willing to back Muslim elements close to al Qaeda...for the sake of sabotaging current policies. In these circumstances, finds it increasingly difficult to determine which are its friends...and which its foes."

Nor does the Obama administration know which are its friends -- nor indeed does it even seem to understand, with the lucidity this Israeli analysis displays, just what its own situation is. All one can really say to Mr. Obama is that American military intervention in the region has been the largest cause of the present chaos. Therefore, the isolationist instincts of the American people, displayed recently when the president rashly wanted to bomb , were and remain sound ones. Don't make things worse.

"Isolationist Instincts of Americans are Sound Ones"