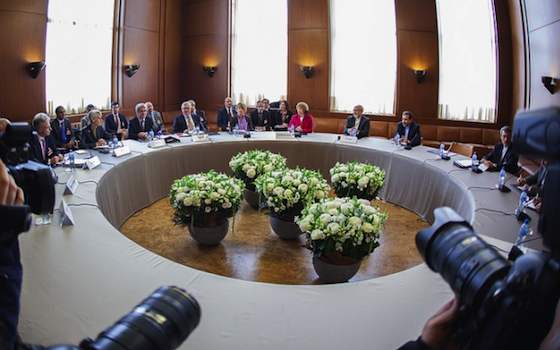 After four days of relentless negotiations, senior diplomats from six world powers and Iran emerged with an interim agreement that paves the way for not only a conclusion to the decade-long Iranian nuclear impasse, but also for a gradual rapprochement between Iran and the United States after more than three decades of hostile relations.

The historic agreement was met with a joyful reception in the streets of Iran, where hundreds of people greeted Foreign Minister Javad Zarif at Tehran's Mehrabad airport upon his return from Geneva. Thousands of Iranian social media users also buzzed with excitement upon hearing the news that the deal had been made, with many having stayed up all night to follow the developments.

"Wow," said an Iranian taxi driver quoted by the New York Times' Thomas Erdbrink. "Our foreign minister is a hero; he is the Mossadegh of our time."

The Iranian people are no doubt relieved at the prospect of easing the siege of sanctions and threats of military strikes against them. However, to the dismay of many of these Iranians and contrary to many naysayers in the United States, the deal itself does not in any sense represent an end to the sanctions regime -- at least not yet.

In fact, the vast majority of sanctions -- the ones that are hurting ordinary Iranians the most -- will be kept firmly in place with this initial deal. These include sanctions on Iran's oil and banking sectors, which have led to the freezing of an estimated $100 billion of Iranian oil sale funds abroad.

Instead, this preliminary deal between Iran and the P5+1 countries (the five members of the UN Security Council and Germany) gives Iran access to $4.2 billion of its own money from oil revenue held in frozen accounts. It also suspends U.S. and EU sanctions on Iranian petrochemicals, gold, and precious metals; relieves Iran of U.S. sanctions on its automobile and aviation industries (so Iran can order spare parts for its dangerously outdated civilian aircraft); eliminates stop-gaps in the flow of medicine, medical goods, and foods; and pledges no additional U.S. and EU sanctions during this six-month interim period.

In return, Iran has made major concessions of its own.

Iran will stop enriching uranium to 20 percent, the level that can be more easily enriched to the 90-percent level required for a nuclear weapon, and instead cap its enrichment at 5 percent. Its existing stockpiles of 20-percent uranium will be diluted or converted to forms that make any further enrichment difficult or impossible. This eliminates Iran's ability to develop a nuclear weapon without it becoming immediately obvious to inspectors, who will enjoy daily access to enrichment facilities at Natanz and Fordow.

Iran has also agreed to suspend any advancement at Natanz and Fordow, as well as at the disputed Arak reactor. While Iran will continue enrichment at the 5-percent level, it has agreed to restrictions on the centrifuges it uses to enrich uranium. It will not install any of the faster and more modern centrifuges it has developed or add any new centrifuges to the existing 19,000 it currently uses.

The deal has come under attack from numerous sides -- ranging from hardliners in Tehran, who have accused Rouhani's government of capitulating, to hardliners in Washington like Sen. Lindsey Graham, who complained that the deal allows Iran to enrich at all. From the sidelines, Israeli Prime Minister Benjamin Netanyahu framed the deal as a "historic mistake."

Of course, if the aim of these dissenting voices in Congress and Israel is to ensure that the Iranian nuclear program cannot be used to construct nuclear weapons, they have no reason to be upset by this deal -- unless their endgame is U.S. airstrikes or regime change. This deal reins in Iran's nuclear program and then some.

Furthermore, this is a completely reversible interim arrangement designed to lead to a more comprehensive deal later on. This final agreement will be aimed at eliminating all concerns that Iran will be able to construct a nuclear bomb without it becoming immediately apparent to the international community. The extreme naysayers in the West should realize there is absolutely nothing to lose in this deal for them -- the limited sanctions relief negotiated in Geneva could easily be reversed should Iran not abide by its commitments.

But given the lopsided nature of this deal, with the Iranians already effectively agreeing to most Western demands and getting little in return, Iran has no incentive not to fulfill its obligations for the next six months. Tehran's strategy is aimed at reaching a final agreement that will include the removal of all nuclear-related sanctions and will allow for the enrichment of uranium at the 5-percent level on Iranian soil. Neither of these goals will be served by Iran reneging on its commitments now -- and that's without even considering the possibility of a U.S. or Israeli strike should the framework crumble.

But importantly, there is no reason to believe that Iran's willingness to deal now is a sign of capitulation to the West -- a line of thinking that lends credence to the "sanctions work" argument and strengthens hardliners in Tehran. Although Iranians have suffered under sanctions, Tehran comes to the table now with a much more advanced nuclear enrichment program -- and a shorter list of concessions that it's willing to make -- than when it first offered to make a deal 10 years ago, before the current sanctions regime was in effect.

As John Kerry himself has conceded, the United States turned down a 2003 Iranian offer to make a deal when Iran had 164 centrifuges to its name. Now it has over 19,000 and will not be required to reduce this amount. Since then, Iran has also brushed aside several Western "red-line" demands that it stop enriching uranium, ship out its 20-percent enriched uranium, and shut down the heavily fortified Fordow enrichment facility. The current deal secures concessions on none of these points. There are also no new restrictions on Iran's ability to design and test new centrifuges, as long as it does not use them.

Still, this was a good deal for all sides -- especially if it triggers a broader rapprochement between the United States and Iran. It's a modest six-month agreement, but it will echo through the decades if it can bring Washington and Tehran in from the cold.

Sina Toossi is a contributor to Foreign Policy In Focus.