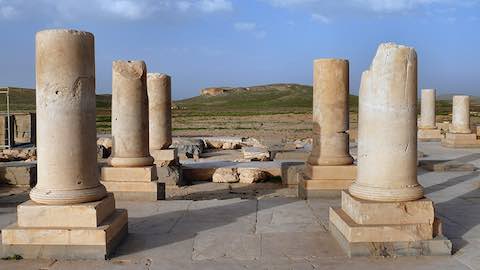 Several recent articles have called on President Trump to change the Iran policy of the United States based on 'past lessons' and Persian history. If we follow these writers to a logical conclusion, then they appear to accept that Iran must be appeased and accommodated, not confronted or contained, in its drive for regional hegemony, support for terrorism and pursuit of non-conventional weapons.

In The Diplomat, Arwin Rahi reviews the history of Persian kingdoms from ancient to modern times, and concludes that Iran 'wants respect and a recognition of its role as a regional player and has earned the right to such'. Rahi calls on Trump to 'understand that Iran is not going to curb its drive for regional supremacy'.

Ian Dudgeon's analysis in The Strategist similarly used supposed history to demand that Washington not persist in seeking to improve the nuclear deal or in confronting Iran's destabilising regional activities. He warns of the danger of a US policy that 'rides roughshod over the Europeans on the JCPOA and foreign investment, seeks to wind back Iranian regional security interests to the direct advantage of US/Israeli/Saudi interests and unacceptably insults Iran'. His key evidence is former Iranian president Mohammad Khatami's alleged 'attempt to reach out to Washington and the West' that was supposedly 'misread and ignored' by the West.

Khatami was famous for his 'charm offensive', marketing himself as trying to connect with the West. In hindsight we know it was largely a diversion, camouflage to ease the sanctions on his country while its undeclared nuclear program steamed ahead.

Current Iranian president Hassan Rouhani is also considered by some as a 'moderate' trying to positively engage with the West. Yet Rouhani openly boasted on Iranian television in 2013 that when he was Iran's chief nuclear negotiator between 2003 and 2005, his negotiation of a deal with the Europeans in October 2003 to suspend uranium enrichment was actually designed to facilitate Teheran's nuclear efforts and allow Iran both to build vastly more centrifuges and to start work on the Arak heavy water reactor.

His current approach appears similar. Since the nuclear deal was signed, Iran has launched 23 ballistic missiles in violation of UN Security Council resolutions. Such missiles are a key part of any nuclear weapons system and have little other use.

Furthermore, in his time as president, there has been no sign of any softening of Iran's aggressive behaviour in the region or of its support for terrorism. There is firm evidence that, financially at least, Iranian support for extremist and terrorist groups -- including Hezbollah, Hamas, Yemen's Houthis and, above all, Iran's key agency in destablising its neighbours, the Al-Quds Division of the Iranian Revolutionary Guards -- has increased markedly.

None of this is surprising because Iranian presidents have little actual control over foreign and defence policies, which are firmly in the hands of the unelected Supreme Leader, currently Ayatollah Ali Khamenei. This is why the hopes for reform or accommodation placed on supposed 'moderate' presidents have never been realised.

Dudgeon and Rahi seem to think that because Persian empires have on occasions played a disproportionately significant role in Middle Eastern politics in the 2,600 years since Cyrus the Great, the only workable policy is to accept that Teheran must be allowed to do so again.

Yet this insistence that Iranian dominance is inevitable is surprising because, as Dudgeon correctly notes, of the deadly matrix of economic hardships in Iran that have fuelled the recent demonstrations against the regime. The economic problems are the progeny of failed government policy and the international sanctions on Iran's military nuclear program, while the nuclear deal hasn't yielded the expected fruits for the Iranian economy.

Whatever its historical ambitions, Iran under the unpopular Islamic Republic is a fairly weak player, with neither the economic nor the military wherewithal to dominate the Middle East, and with considerable domestic problems that risk being exacerbated by any over-extension abroad. That's unless other players heed Dudgeon and Rahi and abandon the region to Teheran.

Trump doesn't seem to be a keen student of either Middle East history or US foreign policy, but there are many thoughtful analysts, officials and legislators who also recognise the urgent need to rethink the previous administration's policy of appeasing Teheran in terms of its rogue state activities to preserve a deeply flawed nuclear deal.

The nuclear agreement with Iran in its current form has many faults that facilitate Tehran's continued campaign to develop nuclear arms and long-range ballistic missiles. Whatever his other flaws as a statesman, Trump was right when he made it clear that the US can no longer adhere to the deal as its stands, and that it must be supplemented and improved.

The real lesson of history is that increasing the pressure on Teheran is the right way forward. It's clear that it was the economic costs of sanctions that drove the Iranians to the table with the Obama administration, even if the resultant deal was sub-optimal.

Perhaps Iran/Persia will someday resume its historic role as the key actor in the Middle East -- but not until, through revolution or evolution, Teheran ceases behaving as one of the world's most irresponsible and dangerous rogue actors.