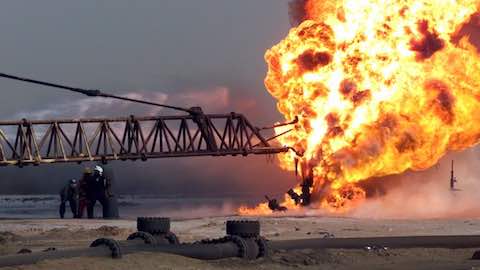 By Craig Giorgis and Daniel Myers

One of the primary indicators of a violent extremist organization's potential longevity is its ability to self-finance. Today, ISIL is the richest such group in the world.

"The sinews of war are infinite money" -- Marcus Tullius Cicero

Many factors have contributed to the Islamic State in Iraq and the Levant's (ISIL) success in the past two years, such as civil strife in Syria, a weak Iraqi state, and Sunni grievance. However, it is financial capacity that is the sine qua non of military operations and effective government -- the two essential components of ISIL' strategic aim to conquer and govern a restored "caliphate." Thus understanding the structure of its political economy is essential to understanding its success. Analysts examining the fundamentals of ISIL's economy have begun to develop a detailed picture, but revenue sources and expenditure numbers are only part of the picture. What makes ISIL's financial DNA unique is its ability to generate revenue through a self-contained oil market and informal banking networks -- both largely independent of traditional international systems.

Estimates on economic activity within ISIL controlled territories vary widely as detailed information is difficult to corroborate. Various sources assert that ISIL's weekly income ranges from $3 to $6 million and weekly expenditures range from $2 to $3 million.[1] Although this is a wide range, expenditures likely vary from month to month as a result of the ever-changing requirements to run a successful and growing "caliphate" and fluctuations in the price of oil. Additionally, ISIL possessed a healthy financial portfolio before Abu Bakr al Baghdadi declared the caliphate in June 2014. Estimates at that time assessed a surplus of $2 billion.[2] This multi-billion dollar surplus lends credence to the assertion that ISIL's financial strength is the result of years of meticulous planning and that its leaders are no strangers to the economic requirements of running a state.

What remains to be seen is whether ISIL's initial surplus and income model will serve them as well in years to come. Economic stability is as critical to ISIL's success as control of territory. People and markets thrive in predictable environments, and part of ISIL's appeal is their ability to create order and justice out of chaos; in other words, political and economic stability form a virtuous cycle. The economic aspects of this cycle require reliable (if variable) income from oil trading and access to informal commercial and financial networks, such as hawalas.[3]

Although ISIL may generate significant revenue from other sources, its oil trading network is a fundamental component of its strategy. Familiar with the informal commercial networks in the region, former Ba'athists at the core of ISIL's leadership have capitalized on the potential of the region's oil industry. Simply put, this self-contained commercial oil network is a reliable source of revenue for ISIL. The following section explores each of these ideas.

For an organization disconnected from licit markets, commodities such as oil are especially valuable because they are easily traded through informal networks. Additionally, they retain their value for long periods of time and retain a relatively constant supply of demand.[4] Although hydrocarbon prices remain low in the global market, oil and gas are still an important source of income -- oil revenues help keep taxes low and are more sustainable than illicit activities such as kidnapping. ISIL's leadership has recognized this fact. A recent article in the Financial Times outlined the strategic importance of oil to ISIL: ". . . long before they reached Mosul in Iraq . . . the group's shura council identified it as fundamental for the survival of the insurgency and, more importantly, to finance their ambition to create a caliphate."[5] Oil is thus a critical strategic asset; without it, or a ready alternative, the "caliphate" cannot remain a caliphate.

An important aspect of ISIL's oil trade is its independence from global markets. Both Iraqi and Syrian oil is smuggled through Turkey, primarily through illegal oil pipelines.[6] The amount of oil and gas that travels through these pipelines is significant enough to have created a dependent micro-economy within Turkey. The oil that is not exported further is refined locally, then transported back across the border to sell inside Iraq or Syria, or is kept for ISIL government operations. This system allows ISIL to generate a significant amount of sustainable and dependable income independent from global market forces and regulation.[7] It has also aligned local economic interests with ISIL's interests, complicated Turkish politics, and helped sustain military operations.

ISIL could not generate significant revenue from oil without access to reliable local physical and commercial networks -- access it gained through co-option of disaffected Iraqi Ba'athists. Understanding the marriage of salafist-jihadis and "neo-Ba'athists" is thus key to understanding not only ISIL's political success but its economic system as well. Many of the illicit networks mentioned above have deep historical roots; for example, in the 1990s, Saddam Hussein used them during the oil-for-food program.[8] ISIL uses the same networks for not only practical (i.e., geographical) reasons, but because former Ba'athists comprise a majority of its senior leadership. Their knowledge, experience, and connections are an important aspect of ISIL's economic system.[9]

While local commercial networks allow ISIL to generate revenue independent of global markets, another tactic facilitates safe movement of money internationally. Hawalas provide an anonymous method for Islamic extremist groups to circulate funds and payments. Most experts agree that hawala networks are difficult to penetrate and regulate. As a result, financiers of extremism are able to retain an anonymous posture and avoid regulatory oversight. Consequently, state governments have a difficult time monitoring or controlling these informal networks.[10]

One reason for the difficulty is that many state governments, while interested in stopping the finance of terrorism, are imperfectly motivated. Expatriates and various diaspora from many nations also use these networks to transfer funds (e.g., remittances) to family in their home countries. In other words, hawalas provide financial transfer services to the "unbanked" and are thus an important aspect of the foreign labor market. Interrupting hawala transactions may therefore hurt host nation economies by disrupting the flow of remittances and the labor market itself. Further complicating this problem is that governments have not yet derived credible estimates of the scale of these transfers. [11] No one really knows how much money travels through hawalas.

This complexity is one reason of why interrupting threat finance has proven problematic. Governments have successfully frozen only a small fraction -- 25 per cent, according to one estimate -- of terrorist assets targeted since 9/11.[12] Regional governments' inability or unwillingness to regulate financial transactions is a major obstacle to success against salafist-jihadi networks. Recent congressional testimony identifies Qatar and Kuwait as nations who have taken little action to curb the financing of extremist networks in the Middle East despite having enacted legislation to do so. For example, from 2009 to 2013, Qatar only received one case for prosecution despite the new legislation governing hawalas. A Qatari official even claimed that hawalas were no longer operating in the country; however, multiple foreign workers told an IMF expert that they frequently used hawalas to transfer funds to their families in their home countries.[13] Influencing these networks thus poses significant political problems.

One of the primary indicators of a violent extremist organization's potential longevity is its ability to self-finance.[14] Today, ISIL is the richest such group in the world. Its ability to generate revenue independent of the international system is a critical source of strategic strength: following ISIL's own logic, money is the resource that enables its transition from "terrorist group" to "caliphate." Controlling resource-rich territory generates further revenue. Yet the "caliphate" demands much of its "caliph" -- namely, effective governance. Implementing order has proven costly, and government payroll appears to be ISIL's biggest expense. [15] And although the "caliph" has issued a call to jihad for scientists, engineers, and other professionals in addition to fighters, [16] the massive outflow of people from Syria is one indication that their efforts at governance are failing. One of ISIL's core strategic aims -- holding and governing territory -- is therefore vulnerable to interruptions in its revenue streams.

Despite this vulnerability, targeting ISIL's finances presents its own set of challenges. The fact that much of ISIL's revenue system is self-contained -- i.e., independent of the international system -- means that traditional methods of targeting financial networks may not work. As strategists consider new methods, two specific problems with targeting ISIL finances should give them pause. First, all economies are complex interactive systems, meaning that any action against ISIL's networks will likely have unintended consequences (note the complexities of interrupting hawala networks above). When considering illicit oil interdiction, for example, United States government efforts at poppy eradication in Afghanistan may serve as a useful analogy.[17] Even denying ISIL resource-rich territory becomes politically problematic -- to which competing faction does this territory revert?

Second, although the interdiction of commodity trading and hawala networks would likely slow ISIL's military operations and further impeded their ability to govern, financial interdiction fails to address the root of the problem. The Jacobites, the Ansar of the "Mad Madhi", the Mujahedeen el-Khalq, early Wahhabism, and the Zapatistas are all examples of violent extremist organizations that endured despite experiencing long-term economic constriction. ISIL as an insurgency is the symptom of many political, economic, and social problems; restricting revenue might reduce ISIL's capacity for war but it is unlikely to reduce its will.[18] However, degrading ISIL's ability to self-finance may present windows of opportunity to work on the deeper problems and thus produce a long-term solution.

[3] The US Dept of Treasure defines a hawala as "an alternative or parallel remittance system. It exists and operates outside of, or parallel to 'traditional' banking or financial channels… Hawalas work by transferring money without actually moving it."

[7] For more detail on how crude oil is moved and refined, see The Financial Times, "Inside Isis Inc: The journey of a barrel of oil."

[11] "The role of the hawala and other similar service providers in money laundering and terrorist financing." Financial Action Task Force Report

About The Authors (Craig Giorgis and Daniel Myers):

Craig Giorgis is a Marine Officer currently studying at the School of Advanced Warfighting in Quantico, VA.