Egypt: The First Nation Ever to Revolt Against Democracy?

In fact, the military’s claims that Egyptian protesters sought an end to the experiment in democracy are highly doubtful 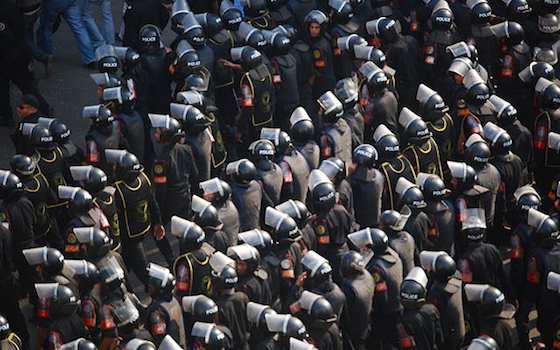 When Egyptian military leaders decided to end Egypt's first ever-ever democratic experience in a coup d'etat on July 2nd, toppling the Muslim Brotherhood (MB) government from powerand imprisoning President Mohammad Morsi, Egypt perhaps became the only country in the world that had a revolution against democracy.

As a result, the new government embarked on persecuting and illegally imprisoning members of the Muslim brotherhood and others who defy the military takeover of power. Last Monday President Morsi was arraigned in court for his initial procedural hearing on charges of "incitement to murder" and "collaborating with enemy entities or states," a reference to the Palestinian organization Hamas. During his brief appearance, Morsi defied the court declaring that he is the "legally-elected president of Egypt" and that "the court proceedings were illegal." Although the trial was rescheduled for January 8th, it is doubtful that the Egyptian judiciary, which is famously corrupt and staffed with pro-Mubarak and pro-coup judges, will hold a fair trial for the deposed president and his aides.

Initially, the military decided to label their coup as a "corrective revolution" a reference to the revolution that toppled the former dictator Hosni Mubarak on January 25, 2011. They also claim that they staged the coup because 30 million Egyptians took to the streets on June 30th demanding the end of democracy that brought the MB to power. Those claims are impossibleto verify and it is rather doubtful that's why over 30 million Egyptians packed themselves up in the streets around Tahrir Square that at best can hold only few million peoples.

In the mind of the many Egyptians, especially the supporters of president Morsi, what happened on June 30th 2013 was not a revolution, rather a coup against a democratically elected government. They argue that the Egyptian generals colluded with the secular and nationalists against the Muslim Brotherhood aided by the pro-Mubarak state apparatus that stayed in place after the former president stepped down in 2011.

The coup, led by defense minister Abdel Fatah El Sisi, was a culmination of a strange alliance between the state apparatus of the old Mubarak regime that included the armed forces, a motley crew of revolutionaries of January 25th revolution and the rich oligarchs who benefited from the institutionalized corruption of the Mubarak regime. True to its brutal and heavy-handed reputation, the military dictatorship and the police force mounted a vicious campaign of arrests and killings of members of the Muslim Brotherhood or its supporters that reportedly resulted in the targeted killing of over 200 camped protesters last August.

Supporting this brutality was the Egyptian state media and many of Egypt's leading intellectuals and journalists who embarked on their own fascist campaign of dehumanizing the Muslim Brotherhood or pro-democracy supporters. The highlights of this kind of political atmosphere, in addition to its anti-Muslim Brotherhood slant, is its anti-American and anti-Palestinian racism, in which calls to strangle Gaza, as a way to punish Hamas, is a daily occurrence on the pro-coup media outlets. Egyptian media outlets were peddling the ridiculous charge that President Morsi was conspiring with Hamas to give up Sinai to the Palestinians.

Moreover, American politicians especially President Obama were called many racist names for not coming out to support the coup. As reported by the Wall Street Journal and other publications, Obama was accused of supporting terrorism and his half-brother was accused of being a full-fledged member of the MB, a baseless charge.

With this kind of electricity in the air, it bears an eery resemblance to the political environment of 1930s Germany which propelled the Nazi party to power that brought with it the well-known horrors that followed after that.

For its part, the military and their allies argue that Morsi's government sowed the seeds of divisions within the Egyptian society by favoring the Muslim Brotherhood for all key state positions and were engaged in an "Ikhwanization" of the state. The Arabic word "Ikhwan" means Brotherhood.

No doubt that the Muslim Brotherhood felt empowered by its majority in the Parliament and acted to rule the country in a majoritarian fashion and thus acted as if it was the only political player in country and ignored all other forces.

This might be the MB's political mistake, but it does not mean, however, that the MB or, for that matter, President Morsi, acted illegally or committed crimes the way the current government is making it look like.

No doubt that what happened on that fateful day of July that resurrected the old corrupt regime of Mubarak and the rule of the military dictatorship which is itself a corrupt institution is a setback for democracy not only for Egypt but also for the entire Arab world.

Ali Younes is a writer and analyst based in Washington D.C. He can be reached at: aliyounes98@gmail.com and on Twitter at @clearali.

"Egypt: The First Nation Ever to Revolt Against Democracy?"