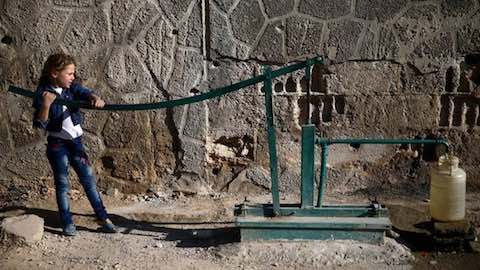 Climate change and other issues have worsened tensions over scarce water in the Middle East and north Africa, lawmakers say

"The long-term prospects for food and water security in the MENA region are dire," said Osman Askin Bak, a member of the Turkish Parliament who will present the draft report on Saturday at the Parliamentary Assembly - a gathering of senior parliamentarians from the North Atlantic Treaty Organization's 28 member states.

"Climate change will worsen the region's outlook," he added.

War, poor governance, climate change and other issues have worsened tensions over competition for scarce water and food in the Middle East and north Africa, the lawmakers said.

Tensions could be eased with better management of water and food resources, including recycling waste water, improved regional cooperation on agriculture and water, and using renewable energy to power desalination plants, Bak said.

Bak's report urges NATO governments to stick to their commitments under the Paris Agreement, including pledges on climate finance to help developing countries adapt to climate change impacts and grow using clean energy.

"The potential for conflict between regions affected by climate change should not be ruled out," said Lilja Alfreðsdóttir, Iceland's former minister of foreign affairs, who drafted a separate report on the costs of climate change for the assembly.

"The refugee crisis shaking political stability throughout much of the Middle East and posing serious problems in Europe could be a harbinger of things to come," her report said.

The Parliamentary Assembly is a separate organisation to NATO but, if the lawmakers adopt the reports, they will send a signal to NATO headquarters.

"It indicates what member states' interests are and that should be reflected in what happens at headquarters," said Shiloh Fetzek, senior fellow at the Washington-based Center for Climate and Security (CCS).

However, climate change also needs to be on the agenda of major meetings of military alliance, like Thursday's summit of NATO leaders in Brussels, she told the Thomson Reuters Foundation.

"Successive secretary generals have indicated ... that this is a major issue that will have huge implications for the security of member states in the future," Fetzek said.

"But there hasn't been much by way of follow through putting it on the agenda," she added.

He was speaking about the importance of upholding the Paris accord amid lingering tensions between the NATO leadership and U.S. President Donald Trump, who at one point called the U.S.-European military alliance "obsolete".

NATO risks being "caught off-guard" unless it does more to monitor and prepare for climate-related instability, said the Center for Climate and Security, a policy institute whose advisory board comprises retired senior military officers and national security experts.

Increasingly frequent, severe and intense droughts play a role in various conflicts including those in northern Nigeria, Syria, and Afghanistan, Fetzek said.

"We know there is an element of climate vulnerability at the root of extremist organisations like Boko Haram in northern Nigeria, and we only anticipate that these situations will intensify as climate change intensifies," she said.

In Afghanistan, farmers are turning from water-intensive crops such as wheat to more drought-tolerant opium poppies, which in turn provide a source of income for the Taliban, she added.

A global shift from oil and gas to renewable energy sources may also have major security repercussions.

"There's a broad question around Russia's economy as an oil and gas exporter, and how Russia may behave as an international actor if its economy is affected by (the energy shift)," she said.

Every country will be affected in some way by worsening insecurity, and there will often be surprises, she said.

"No one anticipated Syria being involved in the Arab Spring, but the severity of the drought leading up to that conflict was an example of how we should expect the unexpected under conditions of climate change affecting global stability," said Fetzek.