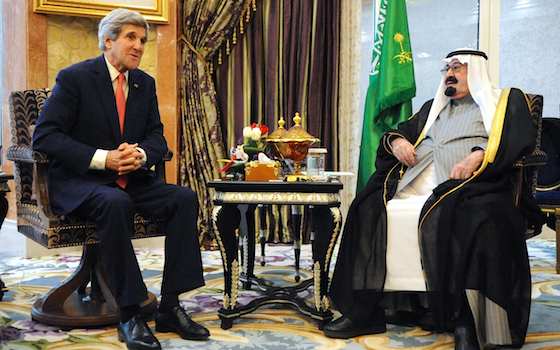 From the point of view of a Saudi policy-maker, the country, the region and the world look to be increasingly complex places

What has got into the Saudis? Their unprecedented decision in October not to take up their seat, and their angst over Western policy towards and what some in perceive as a mating dance between and , have sent a strong signal of unease.

Those worrying about what's going on in the Kingdom also raise concerns on the succession front; about the implications of the changing shape of world energy markets at a time when is generally estimated to need an oil price of at least a barrel to sustain its social and economic programmes and to support its allies in the region; and whether a frequently creaky government system has the capacity to cope with the host of problems the country is facing from within and without.

Certainly, from the point of view of a Saudi policy-maker, the country, the region and the world look to be increasingly complex places.

On the internal front, faces many of the pressures which prompted Arab Spring uprisings in other parts of the , with about half of the population under 25 and a high rate of youth unemployment, despite a determined 'Saudization' policy to encourage employers to hire local staff rather than expatriates.

In the region, the Saudis used to be able to rely on several factors that maintained stability: as a reliable partner for 'moderation'; bad behaviour ensuring remained an indispensable Western ally; and a Western -- above all American -- assessment that it had a stake in their region, even if on occasions it was a role that they got badly wrong, as in in 2003.

The Saudi world view should not be over-simplified, however.

As Arab uprisings unfurled in , and , I was struck during discussions with senior Saudis by their recognition that what we were seeing represented complex events with many causes and consequences, much like the French or Russian revolutions. Saudi policy-makers warned from the start of the danger that the winners of the Arab Spring would not be the liberal youth in and elsewhere, but the deeper, darker, better organized forces in such societies.

Their domestic response has included social and economic moves easily interpreted as attempts to buy off pressure for political change. But Saudi decision-makers also feel that the West has yet to understand the intricacies of Saudi society, and that reform will take time.

Some traditional critics of the Al Saud inside are indeed looking around their region and asking whether the ruling family has not got it right with its cautious steps forward -- including the appointment of women to the Shura consultative council, and allowing women to vote and stand in next year's municipal elections. After all, ballot-box democracy elsewhere in the region has not proved the answer to every problem, and would almost certainly mean a resurgence of conservative and tribal forces in itself.

Even before the first signs of unrest there was a palpable sense of insecurity among Saudis. The 'Shia Crescent' stretching from to Hizbollah, via and , was seen to be extending into new areas, with the Iranians accused of stirring up trouble in , and elsewhere, including .

There is much deep history here. But we would be wrong to ignore the extent to which the Saudis are feeling encircled and threatened, as well as their concerns about whether the West, still under the shadow of military adventures in and , is as firmly committed as it was to resist that threat.

They worry that Western ( apart) eagerness to strike a deal with and avoid another unpopular military intervention will result in an agreement that gives the Iranians more weight in the region -- and more scope for trouble-making. There is indeed an underlying sense of insecurity in some Saudi minds about whether the West might even, as in the days of the Shah, see as a more natural longerterm partner, given the latter's burgeoning middle class and electoral habit. The Saudi voices I hear do not think that what they see as the current lack of American resolve is merely a short-term feature of the Obama Presidency: they spot a deeper trend of Western disengagement from their region, and ask: 'Where does this leave us?'

When they try to answer that question, they know that part of the answer has to be more self-reliance, and greater coordination among the six member states of the on defence. They also know that, as regards the GCC, this will remain work in progress, at least in the short-term, given the fault-lines between member states.

So, is it time for some fresh thinking by ?

Internally, many would argue that, while there is no sign of immediate threat to the Kingdom's stability and the Al Saud's rule, the government nevertheless needs to move forward more boldly on the King's reform programme. If Western-style democracy is not the answer, the Saudis need to come up with a clearer vision about how their own system of consultation and consensus- seeking might evolve to meet the aspirations of a youthful, globally-aware population, and to articulate the extent to which elections will play a part in this.

More needs to be done to modernize the education system and to create a culture in which young Saudis prefer to work in the private sector. The public sector needs reform and energizing. Thought needs to be given to the shape of the current social contract, and to achieving greater transparency. An element of direct personal taxation would generate a political culture in which citizens, rather than subjects, feel they have a right to a certain level of service. The level of subsidies for domestic oil is unsustainable. Consideration also needs to be given to how the balance between the political and religious establishments should evolve so young Saudis do not feel obliged to head to or when they want to relax.

Externally, it is difficult to avoid the impression that Saudi policy is more re-active than pro-active, however understandable their worries about and their hesitations about President Rouhani and his grip over the regime's hardliners. Just over 10 years ago, then Crown Prince Abdullah was the source of what became the Arab Peace Initiative that set out a vision of how the people of could expect normal relations with the countries of the region if they were ready to make the tough compromises necessary for peace.

Is it not now time for the Saudis to take the lead in setting out a positive vision of how the wider region might look if could resolve its current problems, and above all if were to drop its military nuclear ambitions and play a responsible part in the maintenance of regional security? This would not mean the Kingdom dropping its guard -- only taking the lead in defining a vision for a positive and peaceful future.

The Saudis also need to start talking to their neighbours about sustainable development, including climate change, environmental degradation and resource shortages, particularly water. The impact of such factors is well known. In , for example, some assess that a climate change-induced drought from 2006-10 prompted hundreds of thousands of Syrian farmers to flee to the cities and towns, adding to the pressures behind the disturbances there. The Saudis are well placed to take the lead in focusing the world's attention on the need for action.

One intriguing feature of current Saudi society is the sense that the debate on all these issues is at last underway, in a more open manner than ever before. It is important for the Kingdom and the region that it comes up with the right answers.

Sir , British Ambassador to 2010-12, is an Associate Fellow at the Chatham House Middle East and North Africa Programme