American Departure Will Leave Behind Carnage and Ruin 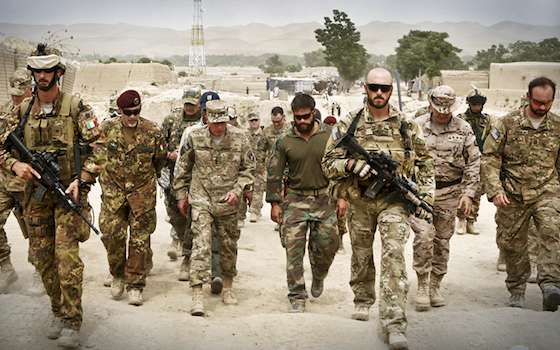 American Departure Will Leave Behind Carnage and Ruin

This is probably, but not certainly, the year that sees the end to three-decades-long effort to establish permanent American strategic bases in the Muslim Middle East and in Muslim Asia. This effort began before the 9/11 attacks on and in 2001. The attacks were revenge for refusal to remove the airbase and troops it had installed in , the Holy Land of Islam, following the Gulf War to liberate , following invasion and occupation of that country.

America's retaliation was the invasion of and destruction of its Taliban government, the invasion of and destruction of Saddam Husssein's government and the country's infrastructure. The Hussein government, dominated by Sunnis, was replaced with a puppet government dominated by Shias. That government eventually turned against its occupiers and ordered them to leave -- which they did. Today the country is assailed by violence as the Sunnis attempt to recover power. has turned to wage its war on global terrorism elsewhere.

It turned to , where it welcomed and supported a predominantly Sunni insurgency, which soon included and became dominated by al-Qaeda militants and members of the group that chooses to call itself ISIS, the Islamic State of Iraq and . was dismayed because these people were also its enemies and enemies, and , who together with were supporters of the Basher Al-Assad regime in .

These jihadist forces, with allied Wahabi and Salafist groups, were aided by -- formerly America's great ally and supplier of oil -- and , a newer Sunni ally. The enemies of the Al-Assad government were accustomed to get aid in wooden boxes stenciled "Gift of the American People." No more; times had changed.

The Obama administration recently was eager -- on and urging -- to bombard and the forces of Basher Al-Assad because of his alleged use of chemical weapons. To good luck, Vladimir Putin and the Russian foreign office intervened to suggest that there was a better way to handle this. Now a chastened U.S. has been backing UN and Russian efforts to promote peace, thus far unsuccessfully.

When the American invasion of was being planned in 2002 and 2003, had to have it explained to him that both Shia and Sunni Muslim believers existed, had rival theological origins and beliefs and were power rivals. For Mr. Bush and millions of other Americans they were all just Arabs. Thus, the U.S could be for and against Sunnis and Shia according to what country is being talked about, and at on what date on the calendar.

Accidents happen. The French-led intervention in in 2011, belatedly joined by the U.S. and , overthrew Muammar Qadhafi, but left his ample armories to be looted to serve internecine power struggles in , and also pushed the mercenaries and various jihadist groups in the country southward into central , and westward to , extending their power there and elsewhere in the Maghreb. The Republican congressman claimed last Sunday that "al-Qaeda is spreading like a spider's web -- like a wildfire -- throughout " posing a rising threat to . (Why a threat to the U.S. was not clear, but President Obama, rather than , was to blame.)

The immediate prospect on America's other battleground, in , is a disordered attempt to withdraw the U.S. army from , while continuing to deal with a nuclear which will be freed by America's departure to pursue its own national interests, which are not those of the U.S. These chiefly concern and Indian rival, as well as who will prevail among the political forces of when the American-created government falls.

Among the questions yet unanswered are whether American forces now in will be able to withdraw intact, free from harassment; and what will happen to the CIA's anti-Taliban CIA drone assassination program, now based in . According to the , the CIA is looking for a new Central Asian base, but no one knows any country -- within drone range of and northwestern territories, the main target area -- eager to take in the CIA. Another question follows. What would reaction be absent America's continuing program of assassination of nationals, launched from the in ?

Indeed, why should go on killing people in these countries when it no longer is at war in either or the ? Elements in the U.S. government seem determined to continue to make war against worldwide (Islamic?) radicalism, wherever it may exist. Others are not. Despite what Americans want, people both in the and in now seem increasingly determined to take control of their own affairs, including their own wars, revolutions, dictators and military regimes. This seems wise.

The American departure will leave behind much carnage and ruin. It will leave America's largest and most expensive (former) embassy on earth -- "bigger than the ," we proudly were told, as construction was under way in . It will serve as a monument to American strategic ambition, becoming the American Ozymandias ("look upon my works, ye Mighty, and despair!"). Tourists will visit it.

"American Departure Will Leave Behind Carnage and Ruin"