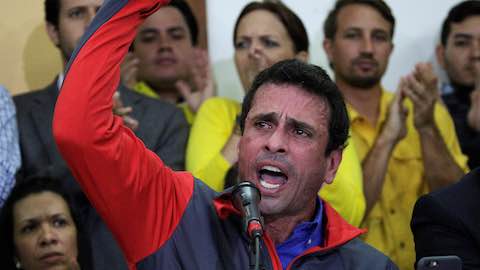 Livid opposition leaders accuse President Nicolas Maduro's government of crossing a line into dictatorship and vowed peaceful street protests after their push to remove the socialist leader through a referendum was quashed.

The 53-year-old Maduro warned his foes not to "go crazy."

Venezuela's election board suspended the opposition drive for a recall referendum on Thursday despite the OPEC nation's crushing economic crisis, Maduro's unpopularity and public opinion in favor of a plebiscite.

That left Maduro on track to complete his term, which ends in early 2019, and dashed opposition hopes to force a presidential election and end 17 years of socialist rule.

Leaders of the Democratic Unity coalition said protests would begin immediately on Saturday with a women's march in Caracas, followed by nationwide rallies on Wednesday dubbed 'The Takeover of Venezuela'.

"We witnessed a 'coup d'etat', there's no other way to call it," said Henrique Capriles, a state governor and twice-presidential candidate who has championed the referendum.

"We are at the limit. We don't want a social explosion, but what can we do if they steal our constitutional right?" he added, urging the armed forces to defend the constitution.

Coalition head Jesus Torrealba said Venezuela's opposition faced the same challenge as Polish leader Lech Walesa in his 1980s battle against communism. "Our response will not be submission or violence, but a fight ... based on the principles of peaceful resistance," he said.

Dozens of angry students took to the streets of Caracas. They were blocked from marching by police.

"Socialism has failed here, everyone can see that," said student Saray Nava, 18, who joined demonstrators outside a university. "This disaster affects us young people the most. We don't want to leave like so many have. We want to work in Venezuela, have children in Venezuela."

Citing court orders due to government allegations of fraud in an initial signature drive, the election board canceled the next phase in the referendum process - the collection of 4 million signatures to trigger the vote - planned for next week.

Critics say both the judiciary and the election authority are subservient to the state, and barely any of their decisions have gone against Maduro since his rule began in 2013.

Some of the harder-line opposition figures, including veteran activist Maria Corina Machado and jailed protest leader Leopoldo Lopez's wife Lilian Tintori, are urging civil disobedience. "This dictatorship will not grant us anything. We have to achieve change in peace, democracy and - above all - in the street," Lopez's Popular Will party said.

In 2014, opposition protests led to 43 deaths, including security force members and both government and opposition supporters. Many of Venezuela's 30 million people are worried about a fresh bout of unrest.

"I call for calm, dialogue, peace, respect for justice and the law," Maduro told state TV from Azerbaijan, during a tour of oil producers seeking measures to bolster global crude prices.

"No one should go crazy ... the irresponsible group leading the Venezuelan right must not spoil Christmas."

Enduring a third year of recession, Venezuelans are increasingly skipping meals amid food shortages and triple-digit inflation. Maduro, a former bus driver and union leader elected three years ago after Hugo Chavez died from cancer, has seen his popularity tumble to just above 20 percent.

While foes blame failed socialist policies for Venezuela's economic mess, the government has pointed to the steep slump in oil prices and alleged a U.S.-led "economic war" against it.

The opposition won National Assembly elections at the end of 2015, largely due to public ire over the economy.

Government officials said the opposition was to blame for the referendum failure by committing fraud, such as adding names of minors and dead people to the initial signature drive.

"Justice is being done," senior Socialist Party official Jorge Rodriguez told reporters, adding that 8,600 fraud allegations had been lodged against the opposition at courts around the country.

Various pro-government rallies were held around the country, with officials exulting at the death of the referendum.

The decision came despite intense international pressure on Venezuelan authorities - from the White House to around an increasingly conservative Latin American region - to allow the referendum.

The U.S. State Department said it was "deeply concerned" at the blocking of Venezuelans' right to determine their future.