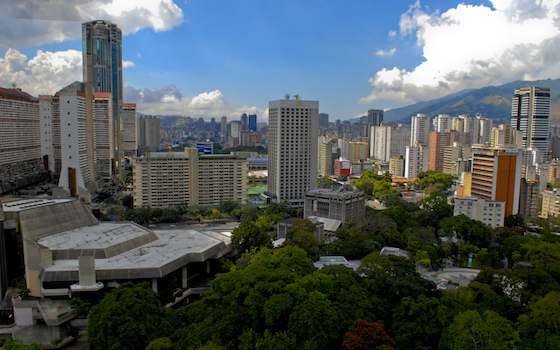 When I interviewed the head of the Western Hemisphere division recently, he didn't mince words about the possibility of descending into even greater economic chaos.

, the senior IMF official, said there is a "high" probability that , which already has the world's highest inflation rate, will see even higher rates this year.

Noting that annual inflation rate reached 56 percent last year, I asked him whether a country can maintain such inflation rates without falling into hyper-inflation - a situation in which the local currency becomes virtually worthless, merchants close down their stores, the entire economy collapses, and in many cases governments end up falling.

Werner responded that "episodes of 50 to 60 percent inflation rates that remain stable for several years are hard to find." He added, "these are levels in which economies either further accelerate to very, very high inflation rates, or they set in motion political measures to control the pressure on prices and stabilize the economy."

Is the Venezuelan government taking the right measures to tame inflation? I asked. Werner clearly doesn't think so.

To stop the inflationary spiral, the Venezuelan government should reduce public spending to get the deficit under control, and take other market-friendly measures aimed at rebuilding trust in the local currency. So far, there are no major signs that is doing that, he said.

"As a result, the probability that inflation will keep rising is high," Werner told me. "Everything points at an important acceleration this year."

Venezuelan President claims that he is waging an "economic war" against a "parasitic bourgeoisie" that is allegedly hoarding goods to destabilize the government. Maduro has imposed stiff price controls and stringent foreign exchange rules, which merchants say virtually force them to sell their goods at a loss.

Not surprisingly, there are growing shortages of consumer goods in the country. Maduro has vowed to impose more radical measures against businesses, which has fueled greater panic, and has driven Venezuelans to rush to buy U.S. dollars in order to get rid of their increasingly worthless local currency.

Asked about , where according to independent indicators inflation reached a 26 percent annual rate last year, Werner said the country is going through "a difficult situation" following a drop in its foreign reserves last year, and additional drop in foreign reserves so far this year.

But Werner refused to speculate on whether there is a threat of hyper-inflation in . In light of the recent trends, it looks like "inflation clearly would rise, but it would be premature to put a number on it," he said.

As for the rest of , Werner said he expects the region as a whole to grow by 3 percent this year, slightly more than last year.

He sounded pretty optimistic about , and the . These countries are closely tied to the U.S. economy, and are likely to benefit from an expected U.S. economic expansion this year, he said.

A second group of countries that have carried out responsible economic policies, such as , and , which attract domestic and foreign investments, will do relatively well this year, he said.

A third group of countries that suffers from high inflation rates and falling reserves, notably and , will suffer an "important deceleration" of their economies this year, he said.

My opinion: The IMF has not always offered the best economic recipes for financially troubled countries - in , it has often preached too much austerity, choking any possible growth - but its economic forecasts tend to be realistic.

While Werner did not pronounce the word "hyper-inflation," I came out with the impression that he sees a possibility that inflation rates may run out of control, and a somewhat lesser chance of that happening in .

president Maduro is making a big mistake by focusing his fiery speeches on trying to smear his political opponents - his biggest rival is not the opposition, but the U.S. dollar. Unless he can stop the inflationary spiral, it's hard to see how he can prevent an economic collapse, and his own political demise.