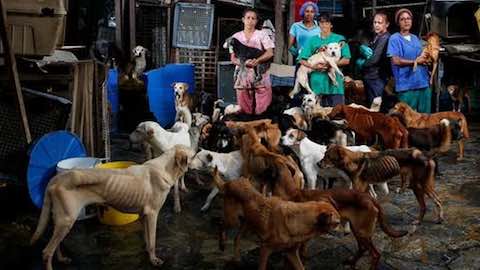 Venezuelans struggling to feed their families, let alone their pets, during the country's deep economic crisis are increasingly abandoning emaciated dogs in streets, public parks and makeshift shelters because they no longer can afford to care for them.

(Reuters) Venezuelans struggling to feed their families, let alone their pets, during the country's deep economic crisis are increasingly abandoning emaciated dogs in streets, public parks and makeshift shelters because they no longer can afford to care for them.

At one dilapidated sanctuary in the hills outside the capital Caracas, hundreds of scrawny dogs bark and claw through wire mesh to scavenge for food in the streets and forest land nearby.

"The crisis has hit hard," said Maria Arteaga, 53, who began looking after stray dogs in her own home before founding the shelter in Los Teques, the capital of Miranda state.

"People are abandoning their dogs because they can't afford food and because they're leaving the country."

Every few hours, vehicles pull up and people hand over dogs, including pedigrees. Volunteers arrive daily to donate and help distribute food to the animals.

Though Arteaga does not have a formal register, she has seen an increase in the number of dogs arriving in recent months, with nine poodles dropped off just in the past two weeks.

Suffering through a third year of recession, Venezuelans are experiencing shortages of food and medicine, and are finding salaries wrecked by triple-digit inflation.

A 20-kilogram (44-pound) bag of dog food, for example, costs around $50 at the black-market exchange rate, nearly double its price in the United States and out of reach for many in Venezuela, where the minimum wage is $23 per month.

So sanctuaries like Arteaga's are proliferating, while ever more stray dogs turn up on the streets. Pet shops are struggling to stock shelves with food and medicine.

The plight of the pets comes despite pushes in the past by the socialist government to protect animal rights. In 2013, for example, President Nicolas Maduro set up Mission Nevado, named for independence hero Simon Bolivar's dog, to rescue and protect strays.

But now even police are rationing food in order to feed their sniffer dogs.

On one recent day, systems engineer Maria Rodriguez, 33, said she came across a stray dog in Los Teques and her 12-year-old son begged her to keep it to accompany the family's border collie.

"Sadly our income isn't enough for us to eat, so how can I give food to two or three dogs?" Rodriguez said, after dropping off the animal at Arteaga's sanctuary.