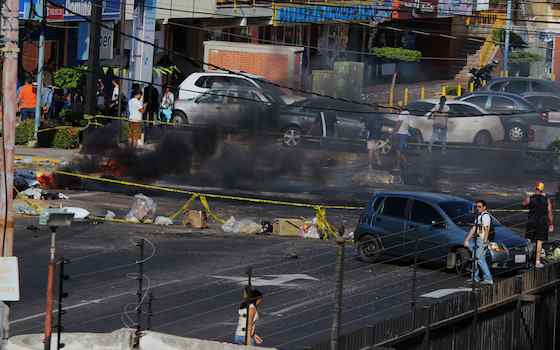 Here we go again. Yet another country full of voters who foolishly bought into the socialist pipe dream of endless nanny-state freebies is noticing the check coming due. Facing hyperinflation and shortages of necessities like toilet paper, Venezuelans are spilling into the streets, pleading for Captain America to rescue them from their own chronically poor voting choices. Sorry, amigos, but it's not America's problem.

Venezuelan voters aren't victims; they're accomplices to their own predicament. With now only America's fourth-largest supplier of oil behind , and , economic intervention no longer represents any significant benefit to -- particularly when is soon to be energy-independent. The U.S. needs to stay out of it and let Venezuelans solve problems of their own creation. It's the only way that socialists will ever learn -- even if they apparently have to keep repeating the same mistake over and over. Eventually, the child might stop putting his hand on the stove.

So how did get to this point? How did this oasis of socialism manage to rank dead last out of 152 countries in a recent global economic freedom report by Canadian think tank the , behind such beacons of excellence as and the Republic of ? Let's start with the Venezuelan government mandating private-sector sales of reduced-priced goods in order to give people more of what they want for next to nothing. The producers of necessities like milk, cooking oil and toilet paper can't afford to function for free, so shortages have become a major problem. It's a classic case study of socialism in action -- the translation of ideology from whimsical abstraction to tangible reality.

Voting is serious business. It isn't like picking out a shirt at a store with a good return policy. This is especially true when the elected party can deploy the military within the country and bend the rule of law as it sees fit. Which is perhaps why Venezuelans should have collectively given the matter a bit more thought before electing President last April.

Maduro is a former bus driver who spearheaded union agitation and became the willing recipient of a benedictory butt slap from his socialist predecessor, . That support from Chavez gave Maduro the edge over his centrist, free-market opponent, lawyer . The election was a golden opportunity that could have led to greater U.S. foreign direct investment and freer markets, and Venezuelan voters totally blew it.

Chavez, elected president in 1998 after leading an unsuccessful military coup in 1992 and supporting another coup later the same year, won public support despite initial voter skepticism by offering -- you guessed it -- freebies. As noted by the Venezuelan newspaper El Universal shortly after Chavez was elected: "In a very hard year due to economic troubles, low oil prices, a prevailing anti-political trend and loss of prestige of political parties, (Chavez) managed to go up in the polls. He climbed little by little and his speech filled with promises won followers, particularly the downtrodden."

The winning formula for a presidential election in consists of various permutations of the following elements: (1) emotional manipulation; (2) retroactively co-opting as a socialist Latin American independence leader , who died 184 years ago; and (3) free stuff. What could possibly defeat that? Logic and realism?

There's still hope, however. Maybe the Chinese can bail out with some foreign investments and joint ventures, since they're swimming in cash. That tends to happen when your domestic workforce will produce for next to nothing. (Bonus: The friction that's sure to result when Venezuelan union activists encounter Chinese labor standards could prove highly entertaining to the rest of us.)

Even in the absence of direct intervention, the situation in is still likely to become America's problem, one way or another. After chronically voting for presidential-freebie candidates, the next step for many Venezuelans will be to bail out of the country now that socialism has proven to be an abysmal failure, again. Venezuelan immigration to had already risen dramatically during the Chavez presidency, and now that it's become a struggle to obtain basic necessities, we're likely to see an even larger wave of Venezuelan immigrants.

One can only hope that they and other new Americans have checked any socialist delusions at the point of entry into America -- although Hispanic support for America's own freebie candidate, President , in two consecutive elections strongly suggests otherwise.