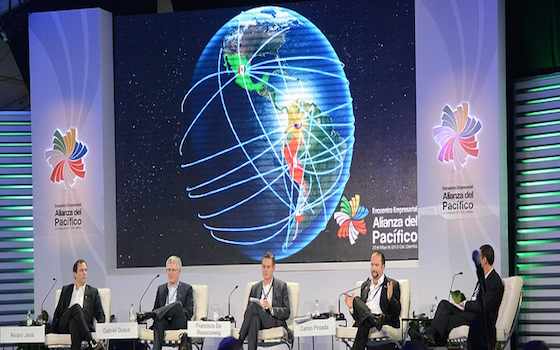 Foreign Minister vehemently denies that new left-of-center government will distance itself from - and in effect weaken - the , the bloc of pro-free market countries made up of , , and that many see as best antidote to the region's populist craze.

Before we get into whether we should take his word for it, let's see what he told me in a long interview when I asked him about press reports quoting Chilean President as saying that she will "review" her country's participation in the .

"No, no, we have not said that. That's what the media have said," Munoz told me. "What we have said is that we will continue being active in the , in a very proactive way, as long as it does not become a political-ideological bloc."

trade bloc has thrived since its 2011 creation, while other Latin American trade blocs have been weakened by internal disputes.

Among other things, member countries have reduced their customs duties, set up joint embassies and export promotion offices in and , and are setting up a joint stock market.

Colombian President has described the Alliance as "new economic and development engine." Such statements have irked , however.

Either because has huge business connections with and , or because Bachelet wants to distance herself from her conservative predecessor's enthusiastic support for the , Bachelet's first official visit this week was to . She is scheduled to travel to soon.

Munoz told me that wants to invite - biggest economy - to play a role in the .

When I asked him whether that's not a recipe for slowing down or killing the Alliance, considering that Brazilian officials have publicly expressed their dislike for the Pacific bloc, Munoz rejected that notion.

He said that will propose "gradual outreach and dialogue" measures to bring into the Alliance, such as agreements on the free movement of people, student exchanges and infrastructure projects along the borders. "All of these things can serve as building blocs toward bigger things," Munoz said.

Much like the has some countries that have adopted the Euro as their currency and others that have not, the can also have two different tracks, he said.

"I can assure you that the Alliance is very much within our radar," Munoz said. "But wants to be a bridge country, so that Atlantic coast countries can move their goods to the Pacific through our ports. To do that, we need to improve our ties with the Atlantic."

My opinion: The Bachelet government is right in seeking better ties with and , which are vital to its economy.

But I wonder whether it should do it at the expense of trying to strip the Alliance off its political aura of "engine of economic growth," because its "regional brand" could be its best carrot to attract foreign investors.

Much like the and other small countries in , it's much easier for to sell itself as a good place to invest as part of a larger group of free market economies - "invest in , and you can export to bigger members of the " - than to do it alone.

At a time when world investors are getting increasingly wary or emerging markets, I wonder whether should not be - at least tacitly - promoting the image as the dream team of star economies, while trying to improve ties with through bilateral agreements.