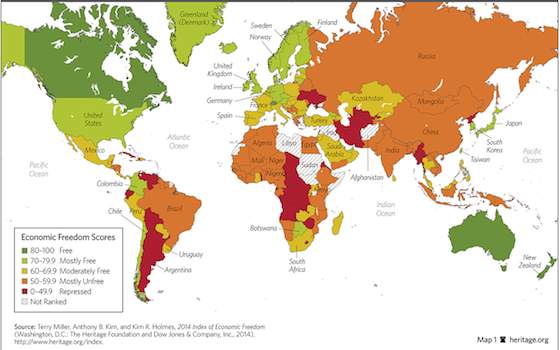 Are things really going that bad? Or is it wildly exaggerated to imply that countries in the region are heading toward the economic mismanagement and chaos that characterized in recent years?

Let's analyze the joke backward, starting with whether is heading toward a . In this case, the answer seems to be yes.

According to the newly released Index of Economic Freedom, an annual study by the -based , is virtually tied with among the world's most repressed economies.

inflation rate is of more than 50 percent a year, one of the highest in the world. By that measure, is doing worse than .

While the African nation printed money like crazy during the past decade - like is doing now - and ended up with hyperinflation in 2008, in 2009 it adopted the U.S. dollar and other hard currencies, and started opening its economy. Its current annual inflation rate is about 10 percent.

Despite being one of the world's top oil producers, its economy will grow by only 0.5 percent in 2014, the slowest rate in , according to projections. is projected to grow 3.3 percent this year, according to the .

When it comes to hyper-bureaucracy and chaotic management, may be a world champion.

On , Venezuelan President created 111 vice-ministries, including the Vice-Ministry of Supreme Economic Happiness. According to the official decree, the new vice-ministries will "optimize the results and the impact of the work being done by the national government."

To make things worse, has become one of the world's most violent countries, with much higher homicide rates than , according to statistics.

According to the Index of Economic Freedom, ranks 166th in the world, nine places ahead of , but within the same group of "repressed" economies.

Inflation in is more than 25 percent a year, although President populist government claims it's only about 10 percent, and people there are rushing to buy U.S. dollars in anticipation of a major devaluation.

Like , has recently nationalized foreign firms - such as oil company - corruption is rampant, and the government has tried to control all major institutions.

But the Kirchner government has not yet been able to silence the media - although it is trying hard - and can't manipulate elections that easily. The government lost recent legislative elections, and there is a general expectation that will get a more responsible government after the 2015 presidential elections.

Is looking increasingly like ? Not really, although sometimes it gives that impression.

According to the Index of Economic Freedom, ranks 114th in the world, about 40 places ahead of .

Granted, Brazilian President , who is running for re-election in October, is failing to take measures to promote investments, and is sticking to a foreign policy that keeps the country from signing trade deals with the world's biggest economies.

But Rousseff has fired more than half a dozen of her cabinet ministers over corruption charges, and has sentenced leading ruling-party politicians to prison on charges that they bribed legislators. None of that has happened in , much less in .

Likewise, is thinking long term on issues such as education, science and technology, which is not the case among its South American neighbors.

My opinion: The idea that much of is falling into a downward spiral makes for good jokes, but it's most likely untrue.

Sure, may descend into further chaos, but it doesn't have many followers. will most likely change course within the next two years, and will, in the worst-case scenario, remain stagnant.

More important, , , , and are doing well, and may drag several other countries in their direction. Together with , the four Pacific-coast countries make up more than 75 percent of economy.

More than a downward spiral, we may soon see the end of the populist cycle, and the beginning of an upward spiral.