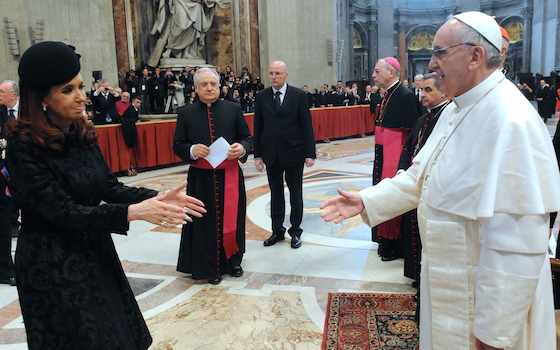 Pope Francis has turned out to be a politically active pontiff who has taken a high-profile role in the Israeli-Palestinian conflict, , and other parts of the world - except in his native .

Contrary to what many here expected when he was named pope in , Francis has not become a foe of populist President , with whom he had a tense - if not hostile - relationship during his years as Archbishop of before he moved to the Vatican.

When Francis was chosen, the Argentine government reacted coldly to the news, while the rest of the region was openly celebrating the election of the first Latin American pope. At the time, there was speculation that Francis would become a thorn in the side of government, much like Polish-born was of Communist government in the 1980s.

Instead, Francis has developed what seems to be a very cordial relationship with . They have met three times since Francis' election. They have also exchanged several gifts, including a pair of baby socks that Francis gave on occasion of the birth of her first grandson.

In , where Francis is one of the most popular figures ever, political analysts who follow his steps with a microscope are quick to remind visitors that the pope is giving president much more time than he does to other world leaders.

In , the pope gave 2 hours of his time at the Vatican. By comparison, President got a 55-minute audience with the pope on , and the Queen of got only 20 minutes when she visited the Vatican in April.

In addition, the pope has received dozens of Argentine groups over the past year. According to several people who have visited with the pope recently, Francis has made the same plea to all visiting Argentine visitors: "Cuiden a Cristina." ("Look after Cristina.")

It is a request to help the Argentine president - whose popularity has plummeted over the last two years - finish her term as scheduled in . In a country that has had terrible experiences with military coups and forced departures of elected presidents, Francis wants to make sure that democratic rule is not once again interrupted, they say.

"I have at least 10 friends who get phone calls from the pope at the most unusual hours, because the pope wants to chat with them, because he misses ," says , a prominent political analyst with the daily La Nacion. "To all of them he says, "Cuiden a Cristina."

Asked why Francis is embracing , well-placed Argentine sources tell me that the two have helped one another in important ways since the day Francis was elected.

When Francis was elected, news agencies around the world echoed claims made in a book by Argentine journalist - who was very close to the Kirchner government - that Francis had failed to denounce human rights violations during 1976-1983 military dictatorship.

"That was a serious problem for the pope during the first days after his election," a former Argentine official who played a key role in bringing Francis and the Argentine president together said. "Some of us started looking who could help shoot down Verbitsky's claims, and we convinced , a highly respected human rights activist, to go public with a defense of the pope."

Oliveira, it turned out, was also one of the pope's closest friends in . Days later, when went to the Vatican, she took Oliveira with her. "Oliveira helped break the ice between the two, and that's how the relationship got started," the former Argentine official said.

My opinion: The pope may not make public statements about , but he is practicing a very active silent diplomacy here.

His "Cuiden a Cristina" message to visitors is, among other things, because he believes in democracy, the two have helped each other politically, and they may share views on issues that are key to Francis, such as abortion.

But I think there is another reason that may be just as important: the pope needs to be in peace, because he could hardly gain credibility as a major player in much thornier conflicts in the and other world hot spots if he couldn't even maintain social harmony in his own country, where he has the biggest political influence. Whatever his reasons, his private diplomacy in is working.