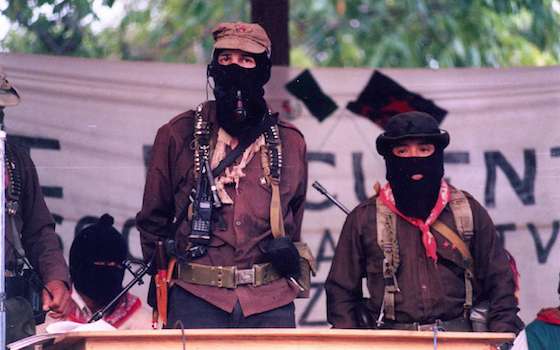 It has been 20 years since Zapatista Indian rebels rose up in arms in southern and I traveled to the jungle to interview their charismatic leader, Subcommander Marcos. I would have never imagined that two decades later, Zapatista-controlled towns would be poorer than before.

For those who are too young to remember, the Zapatistas' rebellion shook the world in the early hours of - the same day the U.S.-Mexico-Canada North American Free Trade Agreement went into effect.

long-neglected Indians, wearing masks and AR-15 rifles, occupied the de las central square as Mexican authorities and police forces were celebrating the new year with their families, and proclaimed a "revolution against capitalism."

Like hundreds of journalists from around the world, I was awakened by my editor that morning, and was asked to take the first flight to . Hours later, I was changing planes in , and heading for .

For the next six months, the Zapatista rebellion made front-page news everywhere: It was the first time that a white man - a pipe-smoking revolutionary who wore a black ski mask and called himself Subcommander Marcos - had been able to unite southern deeply divided Indian groups, and persuade them to rise up against the government.

What was even more interesting, and romantic, was that unlike and other narcissistic guerrilla leaders, Marcos seemed to be a humble revolutionary. Marcos refused to give reporters his real name, and assured them that he was a mere "subcommander" who was taking orders from a committee of Indian commanders.

Intellectuals throughout the world became enamored of what late Mexican writer enthusiastically called "the first revolution of the 21st century." The Zapatistas became an instant symbol of the anti-globalization movement.

Although the Zapatista revolution left at least 145 dead, thousands wounded and 25,000 refugees, I couldn't help sympathizing with their calls for justice when I saw the poverty and neglect they were living in.

It was obvious that the central government did not care about the Indians. When I drove into de las , the biggest construction I saw was not a new water or electricity plant, but a giant theater for the town's white elite.

Months later, when I interviewed Subcommander Marcos with my colleague after we were led blindfolded by the Zapatistas deep into the jungle, I got a clearer picture of the Zapatista hierarchy. Marcos was surrounded by armed Indians whom he identified as the Zapatista commanders, who listened silently when he talked, and smiled whenever he smiled. Marcos was clearly not a "subcommander," but their super-commander.

A few months later, under pressure from government forces, Marcos and the Zapatistas signed a peace treaty with the government. Afterward, Marcos - a former university professor whose real name is - disappeared into the jungle, and emerged sporadically writing political manifestos and poems in leftist newspapers.

The Zapatistas still control about a half-dozen enclaves, refusing to accept government aid for roads, schools and hospitals. They claim to be building a self-governed Indian socialism that will set an example for the rest of the country, and the world.

But the world has moved on, and they continue to lag behind. Since 1994, has started having more credible elections, in which the opposition has won twice. And NAFTA has helped exports boom until 2001, when the 9/11 terrorist attacks drove to add greater border controls that hurt U.S.- trade.

According to official CONEVAL poverty statistics agency, 20 years after the Zapatista rebellion, remains one of poorest states. While poverty nationwide was 46 percent in 2010, it was more than 78 percent in .

In San Andres Larrainzar, one of the best-known Zapatista communities, poverty has risen from 68.7 percent in 1990 to 81.3 percent in 2010, according to CONEVAL figures. In terms of personal income, there have been no gains in most Zapatista-controlled villages over the past two decades, CONAVAL officials told me last week.

My opinion: Subcommander Marcos and his fellow Zapatista leaders would deserve much more respect if they had accepted government aid and thus helped alleviate the Chiapas Indians' obscene poverty levels.

But by refusing to do so, they have put their political ambitions ahead of the Indians' well-being. They have isolated themselves in an ideological dream that has left many Indians poorer than before.