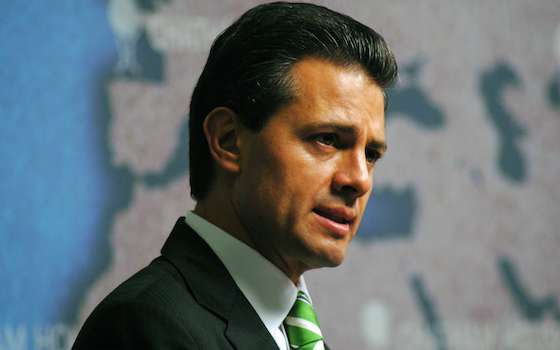 There are many theories about why is cozying up to dictatorship and looking the other way as Venezuelan President brutally represses street demonstrations, but I think the most credible one can be summed up in one word - fear.

Well-placed foreign policy analysts tell me that Mexican President disregard for the defense of universal rights and basic freedoms in and is partly due to fear that these two countries could use their clout with leftist movements to stir up trouble at home.

Pena Nieto has recently passed ambitious energy, education, and telecommunications reforms that have gained enthusiastic applause from , but that most of left opposes. The last thing Pena Nieto wants is for and to encourage these leftist groups to derail the reforms in , or through protests on the streets.

" and are domestic policy issues in ," says , a former Mexican undersecretary of foreign affairs in charge of Latin American affairs. "The Pena Nieto government does not want them to stir up the pot at home while he is trying to implement his energy and education reforms."

Late last year, Pena Nieto forgave 70 percent of nearly foreign debt to his country. During an official visit to the island in January, he met with semi-retired Cuban dictator and praised him as " political and moral leader." The Pena Nieto government has also remained largely silent on Maduro repression of street protests that have already left 20 dead.

Close aides to Pena Nieto told me that foreign policy is guided by pragmatism, and by a desire to be a major player in diplomatic community. During the recent governments of (2000-2006) and (2006-2012), of the opposition , had adopted a more pro-human rights, pro-democracy stand regarding and , which had infuriated those countries' leaders.

"We have a very pragmatic view of how we should conduct our foreign policy," Pena Nieto's chief of staff told me in an interview last week. "In the case of , we prefer to be prudent. We do not believe that strident positions will be very useful."

Most South American countries, led by , are openly backing the Maduro government in . But support for and - which is much more explicit than - comes as less of a surprise, because it is consistent with shameless foreign policy regarding democracy and human rights issues in recent years.

In its quest to become a power, has befriended some of the bloodiest dictators in the Americas, and . Also, leftist government has been pursuing free market economic policies, while keeping its leftwing base happy with a pro-, pro- foreign policy. has also invested heavily in and oil and infrastructure projects over the past 10 years.

Among the few Latin American governments that have expressed concern about the bloodshed in are , , and . Outgoing Chilean president told me in an interview last month that Latin American countries "share a commitment to defend freedom, democracy and human rights not only within our borders, but also outside them."

My opinion: Pena Nieto's policy toward and is not "pragmatism," but - in addition to a shameful disregard for Latin American treaties committing countries to defend universal rights - is a textbook case of diplomatic over-reaction.

If Pena Nieto wanted to keep and from firing up left, he could have done the same with polite diplomacy, without the need to praise as a "moral leader" a dictator who is responsible for thousands of deaths and has not allowed a free election in five decades. In an effort to distance himself from his predecessors, Pena Nieto has gone overboard.

In addition, Pena Nieto's new friendship with will hurt image. recent passage of long-delayed economic reforms has turned this country once again into a darling of the international financial community, but if tries to sell itself to the world as a modern democracy, it will not help itself by teaming up with and .

will have a harder time joining the if it embraces some of the most retrograde regimes of the .