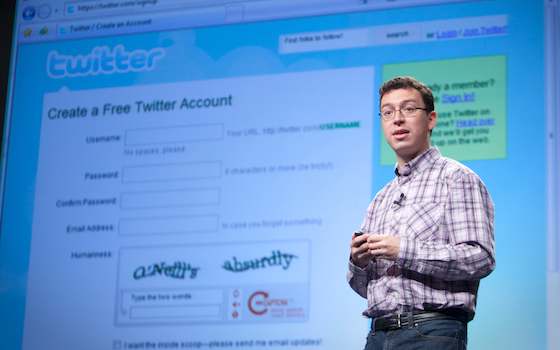 If you think that is doomed to remain behind in science, technology and innovation - as one could conclude from the latest international rankings of patents of new inventions - you should meet .

, a 34-year-old Guatemalan computer scientist and entrepreneur, invented those pesky little test boxes with distorted letters that appear on your computer screen every time you buy concert tickets or access websites that want to make sure that you are a human, and not a machine.

The system, known as CAPTCHA, is being used by about 180 million people daily around the world.

But that was only his first major invention, when he was 22. Three years later, after obtaining his doctorate in computer science at and becoming a professor there, and one of his students created RE-CAPTCHA, an improved version of the human authentication test. They sold it to for a sum that - because of a confidentiality clause - he will only say was between .

Last week, I talked at length with about his career, his latest project - a free language learning system called Duolingo - and about what Latin American countries should do to produce many more world-class inventors like him.

According to newly released data from the -based , a -affiliated agency, Latin American countries are at the bottom of the list when it comes to generating patents of new inventions.

In other words, alone produced 10 times more international patents than all Latin American and the countries.

told me he left at age 17 to study at , because there wasn't any good school offering degrees in mathematics in at the time. But that's not the case in larger Latin American countries, where there have long been good science schools, and a growing interest in innovation, he said.

"Everything I have done could have been done in , or ," told me, referring to the computer programs he invented. "What I do does not require a scientific research project, like those that try to find a cure for cancer. What's needed in is a culture of entrepreneurship."

new Internet language learning system, Duolingo, has already enlisted 25 million users since it was launched in mid-2012. While there are many existing language learning websites - such as Open English, founded by -based Venezuelan entrepreneur , Voxy, and - Duolingo is one of the few that offers language courses for free.

How do you pay for it, if the courses are free? I asked him. It turns out that Duolingo funds itself by selling its students' homework.

invented a system whereby Duolingo gets documents for translation from its clients, and gives them to its students to translate as part of their homework. Students later pick the best translation through a collaborative process, and Duolingo sells the final translated document at discount rates to companies such as , for their multi-language websites.

"Usually, a professional translator charges a word, whereas we can charge as little as a word," told me. "And the quality of the translations is good enough for our clients to be happy."

My opinion: As I am finishing a book on innovation that I have been working on for several years, I am finding increasingly more hidden Latin American innovation treasures such as .

The only reason why many of them flourish outside their native countries is that and other innovation-friendly nations offer them what calls an "entrepreneurial climate" that encourages their work.

There are no biological or geographic reasons why can't make a big leap, and dramatically increase its dismal international patent figures in a relatively short time.

was poorer than most Latin American countries only four decades ago, and has become one of the world's most prosperous nations thanks to its national obsession with quality education and innovation. So it can be done - and faster that most people think.