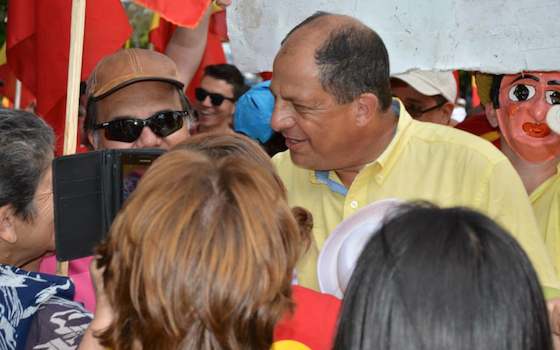 Seeking to calm anxiety in business circles about his election as his country's first left-of-center president in recent history, President-elect says he won't join the Venezuelan-led ALBA bloc of radical leftist countries, and that he sees himself as a "moderate" who is "not unlike many recent European and U.S. leaders."

But in an extensive interview, Solis - who takes office , and will preside over the Community of Latin American and Caribbean States for the remainder of this year - vowed to diversify his country's foreign policy, which he says has been too focused on .

"I have always called for foreign policy to be as universal as possible, " Solis told me. He added that previous Costa Rican presidents "have not looked south, and I want to do it," referring specifically to his intention to "intensify" with , biggest country.

" will not become part of the ALBA bloc, but will continue to have very good relations as it has had until now with ALBA-member countries," he said. "I am not afraid of having good relations with many of these countries."

Solis, a former diplomat and international affairs professor who was a research associate at Latin American and Caribbean Center in in 1999, will take office on amid growing economic and political uncertainty in his country.

Soon after his election by a landslide following the withdrawal of his main rival from the race, U.S. chipmaker - whose assembly and testing operation in had long been the country's main showcase to attract high-tech industries - announced it will partly close its operations in , laying off 1,500 employees. Hours later, announced it will close a call center in , laying off 1,400 people.

Asked about these blows to the country's economy, Solis told me that the two companies themselves have said that their departure from is due to global strategic reasons, "and have nothing to do with my statements, nor my election, nor with domestic market conditions." He added that the two companies had made their decision before the election, "but they preferred to wait until after the vote in order not to contaminate the electoral process with their announcements, which had a big impact."

Now, Solis said he plans to travel to several countries with a group of business people as soon as he takes office to seek new investments. "We have also received news in recent days of new investments that will be coming, in amounts that probably will come close to the number of jobs that were lost after the and decisions."

Solis is also likely to face political problems, as leader of a relatively small party that will only control 13 of the Costa Rican legislature's 57 seats. But he countered that no political party will have a majority in congress, which will force them to reach negotiated agreements. " is not ungovernable. It's a perfectly governable country, and will continue being that," he said.

On other foreign policy issues, he said he will not seek to undo free trade agreement with , which he strongly opposed seven years ago, arguing that conditions have changed.

He will, however, look into outgoing president decision to join the free-trade bloc made up , , and . He said he will decide whether to go ahead with it after studying whether it could hurt domestic producers in .

Asked about political crisis, and whether will maintain its tradition of being one of most vocal defenders of human rights everywhere, Solis said that " would make a big mistake if it moves away from its traditional (pro-human rights) position." He added, however, that as head of the regional CELAC group, he will have to be very "measured" when it comes to being a spokesman for that organization.

When I asked him what he thinks about former Costa Rican President and Nobel Peace Price winner statement that is not a self-styled democracy, but a full-blown dictatorship, Solis said that "the Cuban government has been criticized, justifiably in previous times, for human rights violations, but I think that it's a government that today functions under conditions of much greater normalcy."

On whether he plans to follow example to legalize marijuana, he said that would be "a bad idea" for , although he said he would welcome an open debate about marijuana legalization.

At the end of the interview, I asked Solis who are the Latin American leaders he respects the most. His answer was, in that order, Uruguayan President , and president , both of them pragmatic leftist presidents.

Most experts I talked to speak positively of Solis, and doubt very much that he will embrace radical populist policies or support undemocratic governments in the region.

"I don't think we will see major changes, neither in economic nor in foreign policy, because he won't have much wiggle room," says , a expert with the -based Inter-American Dialogue think tank. " has been growing at nearly 4 percent annual rates for many years, and he will try not to do anything that could put that stability at risk."

Other emphasize that if Solis had not won, the country may have veered much farther to the Venezuelan-styled radical left. Solis' center-left party in effect siphoned off votes from the far-left Frente Amplio party, which advocated among other things for domestic price controls and closer ties with , they say.

My opinion: Solis is likely to bring a breath of fresh air to Costa Rican politics, which have been dominated by the - with few interruptions - for more than six decades. There was a deep demand for change in the country, which the ruling political class was no longer able to address.

I only hope that Solis will meet his word and maintain his country's tradition of leadership in the defense of democracy and human rights in the region.