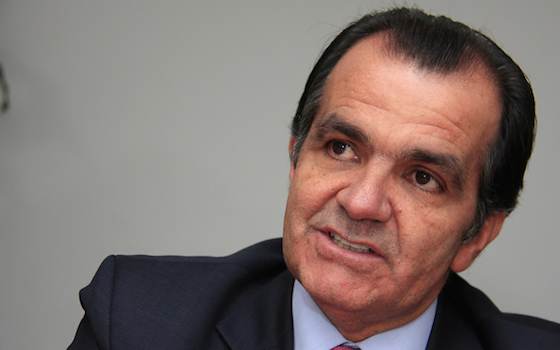 opposition candidate , who polls show is tied with President in the runoff, says one of his first foreign policy priorities, if elected, would be to demand enforcement of a regional treaty to restore democracy and fundamental freedoms in .

Zuluaga, a rightist who scored a first-round upset over the center-right Santos, told me in an interview this week that he would call for the activation of the 34-country to impose regional sanctions on repressive regime.

"For us, in matters of foreign policy, it is fundamental to defend the Inter-American Democratic Charter, which establishes commitments to defend democratic values and institutions," Zuluaga said.

Pro-democracy activists have called in recent years for Latin American countries to invoke the OAS regional treaty against , but have found virtually no support from the region's governments, in part because is a major oil supplier to many OAS member countries.

Referring specifically to , where President won a dubious election last year and is facing opposition protests that have left at least 42 dead in recent weeks, Zuluaga said that top foreign policy priorities should be "combating terrorism and drug trafficking."

Zuluaga and his political mentor, former President , oppose Santos' peace talks with FARC guerrillas, which have become the biggest point of contention in the presidential race.

Santos is campaigning on the premise that his peace talks with the FARC are likely to end five-decade-old armed conflict, and argues that peace would bring about an avalanche of foreign investment that could drive up the country's economic growth to 7 percent annually. Zuluaga, in turn, says Santos is giving away the country to the FARC, and opening the doors to a - and -inspired regime in .

In the interview, Zuluaga said that " cannot accept failure to confront terrorism and drug trafficking embodied by the FARC terrorists (operating) in ." He added: "The FARC is killing, kidnapping and extorting in , and then they cross the border and have the protection of the Venezuelan government."

On the recent bloodshed in , Zuluaga said it is also "the duty" of as a signatory of the Inter-American Democratic Charter to demand a collective defense of democracy and human rights in .

"Clearly, repressing social protests in case has resulted in the deaths of many young people, more than 35," Zuluaga said. "That's a very serious thing that violates human rights, and which is not something that is done by a democratic regime."

Asked whether he supports U.S. congressional proposals - the Obama administration opposes - to impose sanctions on Venezuelan officials involved in the killings of student protesters, Zuluaga evaded the question, saying he would need time to reflect on it. Again and again, he went back to his premise that the cornerstone of his foreign policy would be to "strengthen democracy and freedom in our countries."

My opinion: Zuluaga's call for the collective defense of democracy in is welcome news in a region where presidents looked the other way at that country's scandalous electoral process last year, and where Maduro's government continues to violate basic human rights without criticism from its neighbors.

But, frankly, I doubt that would make a radical foreign policy shift if Zuluaga wins. Realistically, he would not be able to invoke the Inter-American Democratic Charter to impose sanctions against because most OAS member countries would not go along with it. Just this week, at the OAS' annual foreign ministers' meeting in , the group expressed its opposition to the U.S. congressional proposal for sanctions against Venezuelan officials involved in repression of the students.

In addition, while exports to have plummeted in recent years and is not paying its debts to Colombian exporters, business leaders from Colombian border states would put significant pressure on Zuluaga not to endanger what is left of the two countries' bilateral trade. And Zuluaga would also have to be very careful not to give Maduro an excuse to resurrect the Colombian-Venezuelan territorial dispute over the Gulf of as a way to unite the Venezuelan people behind him.

Perhaps Zuluaga would be freer to criticize and other anti-democratic regimes than Santos, whose political life depends on the -hosted peace negotiations with the FARC, and who has teamed up with Colombian leftist parties for the upcoming runoff election. But, other than that, we should not expect a radical foreign policy shift.