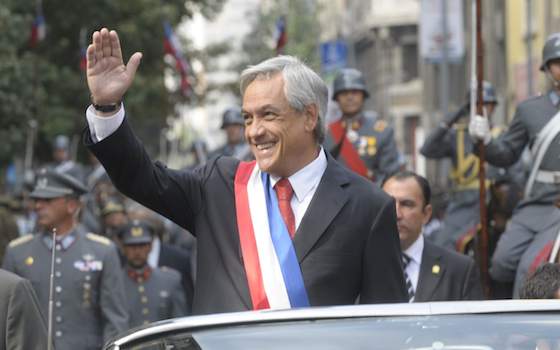 Chilean President will leave office with high popularity and one of the best economic records in . So when I interviewed him a few a days ago, I was curious to know what was his recipe, and why - after achieving such good macro-economic figures - did the opposition win the elections by a landslide.

Pinera, a center-right billionaire businessman, will leave behind a country growing at 5 percent annually, a 3 percent inflation rate and having raised the per capita income from a year when he took office to about today.

By comparison, and are expected to grow by less than 2 percent this year, have annual inflation rates of 28 percent and 56 percent, respectively, and their per capita income figures are below those of .

" today is closer than ever in history to leave behind under-development, to defeat poverty, and to join the , which is where we want to get," Pinera told me in a wide-ranging interview.

He attributed success to several factors, including "democracy, stability, the wisdom of having engaged in (political) dialogue and reached agreements, but also to pursuing a social market economy and free trade."

Pinera said he is leaving office with a healthy economy, despite having had to govern "in very difficult times." When he took office in 2010, the world was in a recession, the U.S. and European economies were in deep trouble, and a devastating earthquake that left in damages had struck just 11 days before the start of his government, he noted.

What about the criticism that economy is growing fast, but inequality has also grown, and poverty levels have not dropped dramatically? I asked.

"We have reduced inequality and reduced poverty," he said. "Take any poverty and inequality indicator you want, whether it's those of our own universities or those of the , and you will see that that poverty had remained flat during the previous government, and has dropped since. And inequality, too. That's beyond any discussion."

poverty has declined steadily from 40 percent in 1990 to 14 percent today, according to U.N. figures.

So if things are going so well, why did President-elect opposition coalition win by a landslide? I asked.

"Well, democracy has its mysteries," Pinera responded with a smile. Bachelet "is a formidable candidate, has many attributes and human virtues, many of which I envy," he said. He added that "our side made many mistakes," including having had four presidential candidates during the few months before the elections.

What happened to him is not too different from what happened to Bachelet at the end of her (2006-2010) presidency, Pinera said. She left office with high popularity rates, but her coalition's candidate - - lost the election.

Asked about his recent trip to , where he participated at a summit of Latin American countries and was the only president who met with the island's opposition leaders, Pinera said he is "very happy" to have met with Ladies in White leader during his trip.

"I thought it was the fair, the right thing to do," Pinera said. "I have always thought that when one visits a country, especially a country like , where there undoubtedly are human rights and democracy problems, one has to - in addition to hearing the Cuban government - hear other voices. ... And I listened to them with all the attention that they deserved."

My opinion: It shouldn't come as a surprise that Pinera is leaving office with a 49 percent approval rate.

While he lacks personal charm and often comes across as a cold-minded businessman, Pinera has done an excellent job in accelerating economic growth and keeping alive his country's success story (which, by the way, was largely made possible thanks to the good economic management by previous center-left governments.)

decades-old economic growth should be an example for the rest of . It shows that a democracy with robust opposition parties, free and fair elections, independent media, a market economy and a desire to join - rather than fight - the is much more successful in reducing poverty than Venezuelan-styled authoritarian populist regimes.

Let's hope that Bachelet, who in recent times has placed greater emphasis on shortcomings than on its achievements, doesn't miss the big picture, and stays the course.