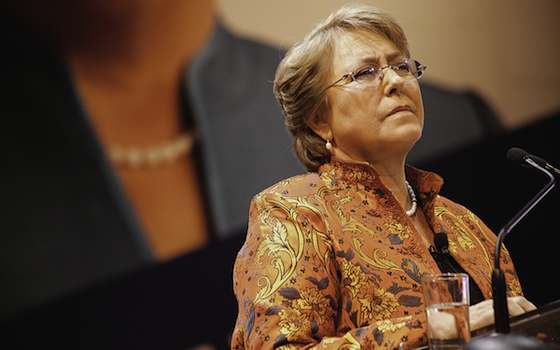 Chilean President may turn out to be a better president than her predecessor , but many pro-democracy activists in may well come to miss his recent views on , and other authoritarian regimes.

Bachelet, a Socialist former president who returned Tuesday to the presidential palace for a second term, suggested during her campaign that her top foreign policy priority will be to improve ties with , and other Atlantic rim South American nations. Pinera, in turn, had stressed ties with the more pro-free market , made up of , , and .

In her first press conference after her inauguration, Bachelet announced that her first foreign trips will include , and that will pursue "a very strong Latin American agenda."

The Venezuelan government describes the ongoing protests against its authoritarian rule as a coup attempt, and claims that it has arrested opposition leader for allegedly inciting violence. Lopez and other opposition leaders deny they are behind the violence, and international human rights groups say there is no evidence that they have done anything but exercise their right to criticize the government.

Bachelet also said that she will defend democracy and human rights in the region, but the big question in human rights circles is to what extent will she do that.

Asked about Bachelet's comments on , Human Rights Watch Americas' director told me that he is not worried about it, because it is consistent with past stances in support of democracy and human rights. He added, "Let's judge on its positions, rather than on its speeches, on ."

In a recent interview before he left office, Pinera told me that Latin American countries should be much more forceful in their defense of fundamental freedoms and human rights in and .

Pinera, who was the only Latin American leader who met with a Cuban dissident leader during a Latin American summit in , told me that "all Latin American countries are committed by regional treaties to defend freedom, democracy and human rights, not only within our borders but also outside of them, and particularly in our continent."

" undoubtedly has serious problems with freedom, with democracy and with human rights," he said. "That's why I used the occasion of my trip to to meet with the Cardinal of , and with the leader of the Ladies in White, which is an organization that fights within for the freedom of political prisoners and human rights."

Citing regional treaties of the , Community of Latin American and Caribbean States and other regional institutions, he said that "in modern international law, it is not only a duty for each country to defend freedom, democracy and human rights within its borders, but also to protect them in all other countries."

Asked what he would recommend Bachelet do about , Pinera said he would advise her to be "coherent and consistent, and that means to defend freedom, democracy and human rights, not only within our borders, but wherever they are being threatened."

My opinion: To be fair, Pinera's most vocal human rights activism came at the end of his government. As for Bachelet, she was generally a strong defender of democracy and human rights during her first term, except for some occasional blunders, such as when she happily visited - a dictatorship that officially censors books - to inaugurate a government-sponsored book fair.

I tend to believe that Bachelet's vow to improve ties with and other populist authoritarian countries is part of her rhetoric to gain credibility among her pro-Venezuelan neighbors, and that it won't mean a U-turn in defense of basic human rights and democracy in the region.

Because of her personal history - her father was tortured and died during 1973-1990 military dictatorship and she was forced to live in exile - and her past commitment to human rights, I doubt that she will follow the steps of the presidents of , and , among others, who are enthusiastically supporting repressive government. It would be a real loss for the region.