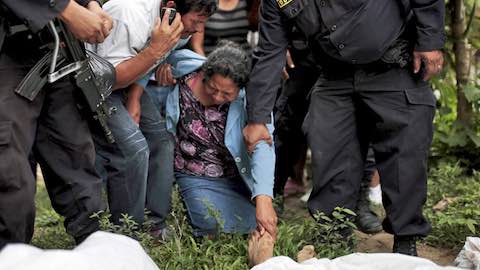 Tens of thousands of Salvadorans, Guatemalans, and Hondurans, many of them unaccompanied minors, have arrived in the United States in recent years, seeking asylum from the region’s skyrocketing violence. Their countries, which form a region known as the Northern Triangle, were rocked by civil wars in the 1980s, leaving a legacy of violence and fragile institutions. However, recent developments in Guatemala and Honduras have spurred talk of a “ Central American spring ” as protesters in both countries have come out in unprecedented numbers to denounce corruption and demand greater accountability from their leaders.

How many people have left the Northern Triangle in recent years?

Nearly 10 percent of the Northern Triangle countries’ thirty million residents have left, mostly for the United States. In 2013, as many as 2.7 million people born in El Salvador, Guatemala, and Honduras were living in the United States, up from an estimated 1.5 million people in 2000. An estimated eighty thousand unaccompanied minors arrived to the United States from El Salvador, Guatemala, and Honduras between October 2013 and July 2015, drawing attention to the region’s broader emigration trend.

Many seek asylum from violence at home: Between 2009 and 2013, the United States registered a sevenfold increase (PDF) in asylum seekers at its southern border, 70 percent of whom came from the Northern Triangle. Neighboring Belize, Costa Rica, Mexico, Nicaragua, and Panama all registered a similar rise. Migrants from all three Northern Triangle countries cite violence, forced gang recruitment, extortion, as well as poverty and lack of opportunity, as their reasons for leaving.

Why are so many people fleeing the Northern Triangle?

El Salvador, Guatemala, and Honduras consistently rank among the most violent countries in the world. Gang-related violence in El Salvador brought its homicide rate to ninety per hundred thousand in 2015, making it the most world’s most violent country not at war. All three countries have significantly higher homicide rates than neighboring Costa Rica, Nicaragua, and Panama.

Extortion is also rampant. A July 2015 investigation by Honduran newspaper La Prensa found that Salvadorans and Hondurans pay an estimated $390 million and $200 million, respectively, in annual extortion fees to organized crime groups; meanwhile, Guatemalan authorities said in 2014 that citizens pay an estimated $61 million a year in extortion fees. Extortionists primarily target public transportation operators, small businesses, and residents of poor neighborhoods, according to the report, and attacks on people who do not pay contributes to the violence. Guatemala’s transportation sector has been hit especially hard: In 2014, more than four hundred transportation workers were killed, and authorities linked most of those cases to extortion.

What is causing the violence?

The nature of the violence is distinct in each country, but there are common threads: the proliferation of gangs, the region’s use as a transshipment point for U.S.-bound narcotics, and high rates of impunity are major factors contributing to insecurity in the region.

A CFR special report in 2012 said organized crime is a clear legacy of the region’s decades of war. In El Salvador, fighting between the military-led government and leftist guerrilla groups (1979–92) left as many as seventy-five thousand dead, and Guatemala’s civil war (1960–96) killed as many as two-hundred thousand civilians . Honduras did not have a civil war of its own, but nonetheless felt the effects of its neighbors’ conflicts; it served as a staging ground for U.S.-backed Contras, a right-wing rebel group fighting Nicaragua’s Sandinista government during the 1980s. Organized crime grew following these civil wars, particularly in El Salvador, where war produced a “large pool of demobilized and unemployed men with easy access to weapons,” according to the CFR report. In Guatemala, groups known as illegal armed groups and clandestine security apparatuses, grew out of state intelligence and military forces.

Organized crime in the Northern Triangle includes transnational criminal organizations, many of which are associated with Mexican drug-trafficking organizations (DTOs); domestic organized-crime groups; transnational gangs, or maras, such as Mara Salvatrucha (MS-13) and the Eighteenth Street Gang (M-18); and pandillas, or street gangs.

MS-13 and M-18, the region’s largest gangs, may have as many as eighty-five thousand members combined (PDF). Both were formed in Los Angeles: M-18 in the 1960s by Mexican youth, and MS-13 in the 1980s by Salvadorans who had fled the civil war. Their presence in Central America grew in the mid-1990s following large-scale deportations from the United States of undocumented immigrants with criminal records.

DTOs, maras, and pandillas “should be understood as different phenomena,” says Michael Shifter, author of the CFR report and president of the Inter-American Dialogue, a Washington-based think tank. Lack of state capacity and governments’ inability to protect citizens, he says, “are conditions that lend themselves to the emergence and strengthening of violent actors. Some of them involved in the drug trade, some are not.” In addition to the drug trade and extortion, criminal groups in the region also engage in kidnapping for ransom and human trafficking and smuggling.

Location along drug-trafficking routes adds to the violence. U.S.-led interdiction efforts in Colombia, Mexico, and the Caribbean have pushed trafficking routes into the region, and U.S. officials report that 80 percent of documented drug flows (PDF) into the United States now pass through Central America. DTOs sometimes partner with maras to transport and distribute narcotics, sparking turf wars (PDF), according a Congressional Research Service report.

Why has violence lasted so long?

As many as 95 percent of crimes go unpunished (PDF) in some areas, and the public has little trust in the police and security forces. (The police and military were accused of widespread human rights abuses during El Salvador and Guatemala’s civil wars.) Cynthia Arnson and Eric Olson of the Wilson Center’s Latin America program write that efforts to reform and professionalize police forces during the two countries’ peace processes were “ incomplete (PDF).”

“There has been so much penetration of the state and so much criminal involvement in security forces, it makes it difficult to think about how they would [reform] without some outside intervention,” Olson says.

How have Northern Triangle countries tried to stop the violence?

In the early 2000s, Northern Triangle governments enacted a series of “mano dura,” or “heavy hand,” policies that expanded police powers and enacted harsher punishments for gang members. Around the same time, military personnel were deployed (PDF) to carry out police functions.

Though popular (PDF) , these tougher policies in most cases failed to reduce crime and may have indirectly led to a growth in gang membership. Mass incarcerations increased the burden on already overcrowded prisons, where gangs, which effectively run many of them, recruited thousands of new members. The U.S. State Department, human rights groups, and journalists have raised concerns about the policies, denouncing prison conditions and police violence against civilians. Overcrowding in prisons drew international attention in 2012, when a prison fire in Comayagua, Honduras, killed more than three hundred inmates.

In 2012, in a departure from traditional hard-line policies, officials in Salvadoran President Mauricio Funes’ administration helped to broker a truce between the MS-13 and M-18 gangs. Homicides fell by more than 40 percent that year. Despite the reduction in violence between the gangs, critics charged that crime against civilians such as extortion continued unabated . When the peace deal unraveled two years later, killings surged.

Under pressure from the United States following the 2014 surge in migration, the governments of El Salvador, Guatemala, and Honduras, together with the Inter-American Development Bank, created the Alliance for Prosperity (PDF), a five-year, $20 billion plan to boost economic growth, promote job creation and training, improve public safety, and strengthen institutions. The Northern Triangle leaders pledged to fund 80 percent of it, yet it is uncertain whether their legislatures will approve the funding.

Guatemala has seen important gains thanks in part to an independent body created by the UN in 2007 to investigate and prosecute criminal groups “believed to have infiltrated state institutions.” The International Commission Against Impunity in Guatemala (CICIG) grew out of the country’s 1994 Comprehensive Agreement on Human Rights. Between 2009 and 2012, impunity levels fell (PDF) from 95 percent to 72 percent, according to CICIG, and in 2015 the tribunal worked with Guatemala’s attorney general on an investigation into a customs corruption scheme that led to the ouster and arrest of President Otto Pérez Molina . In a sign of disillusionment with Guatemala’s political class, voters in fall 2015 elected Jimmy Morales, a comedian with no political experience, over more established candidates.

In Honduras, allegations that members of the ruling National Party embezzled social-security funds, has led protesters to call for the ouster of President Juan Orlando Hernández. Anticorruption activists and U.S. State Department Counselor Thomas Shannon have called for institutions similar to CICIG to be created in El Salvador and Honduras, a proposal top officials in both countries have rejected . The Organization of American States announced plans in September to create an anticorruption body in Honduras, but critics say it will only have a limited advisory role, making it “ toothless .”

What has been the regional impact of the violence?

The regional impact is mostly felt in continued ouflows of people. The United States and Mexico have apprehended more than one million Salvadoran, Guatemalan, and Honduran migrants since 2010, according to Migration Policy Institute, a Washington-based think tank. Belize, Nicaragua, Costa Rica, and Panama have also reported a sharp increase in inflows from the Northern Triangle since 2008.

Gang violence has mostly been contained within the region, although MS-13 and M-18 have a presence in the United States and Mexico. The U.S. Treasury Department, which in 2015 sanctioned three MS-13 leaders, estimates there are eight thousand MS-13 members in the United States, and in 2013, Mexico’s justice department reported on growing ties between Mexican criminal groups and Central American gangs, with as many as seventy Central American organized crime cells operating in Mexico.

How has the United States responded?

The United States has traditionally addressed violence in Central America by sending aid to the region’s law-enforcement agencies, supporting rule-of-law programs, and assisting in counternarcotics and anti-gang operations. Increasingly, U.S. initiatives also look to address the region’s challenges more broadly, including poverty and a lack of competitiveness.

Between fiscal year 2008 and fiscal year 2015, the United States gave just over $1 billion through the Central America Regional Security Initiative (CARSI), a security and rule-of-law focused aid package. CARSI grew out of the Mérida Initiative, a U.S. program to fight DTOs and organized crime in Mexico and, to a lesser extent, Central America.

Following the 2014 influx of unaccompanied minors, President Obama met with the leaders of Guatemala, El Salvador, and Honduras, and acknowledged the United States' " shared responsibility " in addressing drug trafficking and U.S. demand for narcotics. (The United States is the world’s largest market for illicit narcotics.)

Experts say U.S. gun laws and the practice of deporting criminals—between 2010 and 2012, the United States deported an estimated hundred thousand immigrants with criminal records to Northern Triangle countries—also contribute to the violence.

The Obama administration has requested $1 billion from Congress for FY2016 to support its U.S. Strategy for Engagement in Central America (PDF) . The plan, which would represent a significant increase in annual spending in the region, focuses on security, governance, and economic development. The House Appropriations Committee recommended $296.5 million in CARSI funds; its Senate counterpart offered up to $675 million for the new strategy (PDF), according to the CRS.

“The move from CARSI to [the new strategy] reflects an evolution in thinking and an increasing appreciation for the importance of rule of law and institutions for making these aid packages successful,” says Shifter. “How it will end up is a different question.”