What Apple's Cash Pile Could Buy 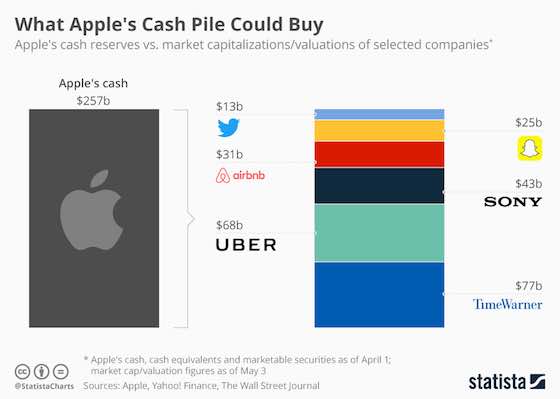 What Apple's Cash Pile Could Buy

This chart shows which companies Apple could buy with its cash reserves.

As Apple reported in its latest earnings report, the company's gigantic cash pile has grown past the quarter trillion dollar mark in the first three months of 2017. To be a little more precise, Apple had $256.8 billion in cash, cash equivalents and marketable securities by the end of the quarter, of which $239 billion was held outside the United States.

To illustrate how much money that is, we put together an imaginary shopping list of companies that Apple could acquire with that cash (assuming they would pay market value). It's a pretty long list and the companies on it aren't exactly small-time outfits either with Uber, Time Warner and Sony all finding their way into our made up shopping basket.

While it is highly unlikely that Apple will go on a shopping spree in the foreseeable future, the company may at least be able to use its cash in the United States soon. As part of his planned tax reform, President Trump suggested a onetime tax break for U.S. companies repatriating cash held overseas. Apple CEO Tim Cook has stated in the past that his company would do so if the money would be taxed fairly. Under current tax law, Apple would have to pay 35 percent federal income tax if it brought its foreign cash holdings back to the U.S.