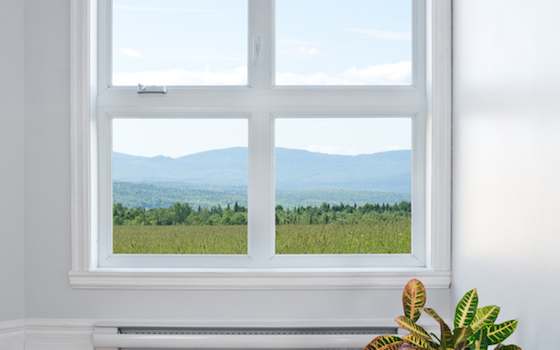 In times long past, when propane, electricity and natural gas were cheap and plentiful, the single-pane window was the standard for most homes. Such is no longer the case, since nearly 30 percent of a homeowner's heating and cooling budget escapes through windows.

Replacing old windows with technologically efficient counterparts requires an up-front investment of thousands of dollars, but the new glass generally pays for itself within 15 years.

Look at the Label

Your new windows should sport the Energy Star® designation established by the U.S. Department of Energy and the Environmental Protection Agency. Also, quality windows feature an energy rating label developed by the National Fenestration Rating Council. These cryptic letters and numbers (defined below) reveal a window's ability to maximize heating and cooling.

Indicates how well a window stops heat loss in a range of 0.25 to 1.25. The lower the number, the better.

A fancy way of indicating how much solar heat a window allows in. The range of the SHGC is 0 to 1. Seek the lowest number possible.

This scale ranges from 0.1 to 0.3. The lower number allows for the least air leakage.

A rating of 0 means very little light penetrates the window. A rating of 1 permits the greatest amount of light.

The scale here is from 1 to 100. The higher the number, the less condensation.

No Pane, No Gain

Look for a double- or triple-paned window for ultimate efficiency. These windows have insulating air spaces between panes that resist heat flow. The highest-cost windows incorporate a neutral gas (usually argon or krypton) between panes. The gas allows less heat transfer than mere air.

Heat-absorbing window glazing and films contain tints that alter the glass color and absorb heat, but the degree of tinting needed varies by geography and climate.

For instance, those in warm climates should avoid black-tinted glass because it absorbs light rather than heat. Also, keep in mind that indoor plants tend to die a miserable death if a tinted window transmits less than 70 percent of visible light.

The typical choices include wood, vinyl, aluminum, fiberglass and composites. Aluminum is the least energy efficient, but the most durable. Wood, good for energy savings, requires a great deal of maintenance. Vinyl is the most popular choice, although the color of low-quality vinyl frames may fade over time.

Weathering the Storm on a Budget

If financial times are tight, you can still make your old, single-pane windows more efficient. Simply add storm windows, and leave them up year-round. They'll reduce air movement, lower heating and cooling costs, and are easily installed. Best of all, they cost but a fraction of double- or triple-pane options.

Ron Marr is a long-time woodworker and luthier whose work can be seen at marrsguitars.com. He is also a frequent contributor to The Workbench Life.