More to Stone Retaining Walls Than Meets the Eye 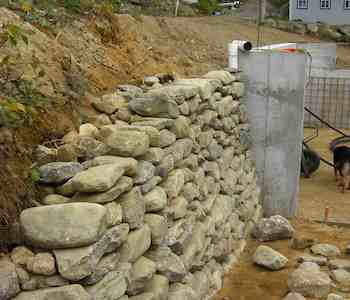 While peeping at the colorful autumn leaves in New England, I saw more than one rock wall. I was so impressed with them and wonder if rock retaining walls really hold up over time. What are some of the best practices used when building these natural wonders that seem as strong as they are beautiful? How do you lift the heavy rocks and stones? --Beverly W., Erie, Pa.

Dry stone wall construction has been a standard practice in New England and other parts of the world for centuries. I've been told that the original settlers used tree stumps at first to create fences that kept livestock from wandering. They then replaced these temporary walls with rock and stone as they started to clear their fields. There are stone walls in New England that date back hundreds of years. Built correctly, they'll last many generations.

Thousands of miles of rock and stone walls exist in New England. As recently as the 1850s, approximately 80 percent of the land area of New Hampshire was cleared of most trees. The land was used as pastureland for sheep. The wool from the sheep kept the textile mills, one of the primary industries of New England in the 1800s, at full capacity as the fiber was transformed into garments.

The farmers needed to control where the sheep grazed and discovered rock walls were the way to go. I'm convinced this technology came with the settlers from across the Atlantic Ocean, as you can find stone walls in farms all over the United Kingdom.

There are two types of stone walls. One is free standing that creates a fence or boundary. The other is a stone retaining wall. The method of construction for each is somewhat similar to the other; however, a stone retaining wall requires some engineering if you want it to last hundreds of years.

A freestanding stone wall can be made by stacking a single row of stones that interlock with one another. You'll also find walls that are much wider and have multiple rows of interlocking rock. Both will work, but the thicker walls often will last longer, especially if they are wider at the bottom than at the top.

Rocks that are more angular than rounded stack more easily and are more stable. Angular rocks resist the movement induced by gravity and frost heaving. The severe frost heaving, which causes the stone walls to move up in the winter then back down in spring when the ground thaws, often doesn't cause damage to dry stone wall construction (i.e., walls that don't use mortar or cement to bond the rocks together). Friction and gravity are all that keep the stones from tumbling down.

One good practice to follow is to use larger stones as often as possible for the lower courses. As you build higher on the wall, use progressively smaller stones.

Retaining walls higher than 3 feet should tilt backwards into the hillside. This is commonly referred to as battering. It's not uncommon for you to see 6 inches of backwards tilt for every 4 vertical feet of height. Some structural engineers may call for even more tilt.

Drainage is also very important. Fortunately, stone walls that are laid dry allow water to pass right through them. But you need to be sure the backside of the rock wall is filled with smaller stones, rounded gravel or crushed gravel that allows any groundwater to easily flow and not get trapped behind the wall. Trapped water just adds to the overall weight of the soil that the retaining wall is trying to hold up.

You can lift the heavy stone any number of ways. Many tool rental businesses will rent you an excavator that has a thumb as part of the bucket. This extra feature works just like your own thumbs allowing it to grab and hold onto a large stone while it's carefully placed. Before hydraulic equipment was used, I assume that the stones were put in place using the simplest machines of all, the inclined plane and lever.

If you've never installed a stone wall, talk to an installer, watch them work or study existing walls in great detail to see how they were constructed. Take photos of what appear to be walls well over a hundred years old. Copy the pattern and methodology as best you can.

Be aware that some stones are set in the wall with the long axis pointing back into the wall. Doing this frequently allows you to interlock those rocks with ones behind the wall you can't see.

Realize that taller stone retaining walls may be as thick as three or four feet at their base. There are hidden rows of rock and stone you can't see that are integral to the structure and success of the wall.