Late Winter Is Time for Pruning and Forcing 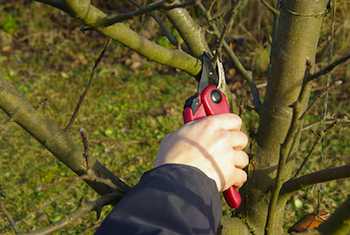 In many parts of the country spring may yet be a distant dream, but even in cold northern climes now is a good time to begin winter pruning tasks in the garden.

I typically start my pruning tasks around mid-February, when daytime temperatures start to moderate a bit in Rhode Island and I begin noticing the days getting longer. Perhaps just the little bit of extra daylight motivates me to get back out in the garden, even if for only a few hours at a time.

Fruit trees such as apples, peaches and pears, as well as grape vines and many ornamental shrubs, are best pruned during winter dormant periods. Evergreens can also be pruned now if you have not done so already.

When done yearly, pruning does not take a lot of time. Most of my pruning consists of removing dead wood and branches broken during storms. I may thin out interior branches on shrubs that are getting too large, which will allow light and air to penetrate for healthier growth. On small trees, I remove branches that rub against other branches, preventing future damage.

For fruit trees such as apples, vertically growing " whips" are removed, leaving branches that grow horizontally for fruit production.

Care must be taken when pruning apples trees that have been allowed to grow unchecked for many years, as bark that is shaded every summer by a dense canopy of leaves can easily be scalded by the sun, causing blistering and peeling of the bark. It's best to thin these trees slowly over a period of a few years, allowing the tree to acclimate slowly.

When pruning back severely overgrown shrubs and trees, especially evergreens, a general rule of thumb is to cut back no more than one-third of the plant each year. This allows the plant to recover slowly and forces growth from areas lower on the trunk or branches.

There are exceptions to this rule: Some shrubs like lilacs, privet and yew can be cut back severely and will still recover nicely.

Flowering shrubs that bloom on second-year growth, such as forsythia, weigela and deutzia are best pruned immediately after they bloom. This gives the shrub time to form new growth and set buds before winter. Pruning shrubs like these now will cut off next spring's flower buds.

While a severe pruning at this time of year is not advisable for most spring blooming shrubs, cutting off a branch or two for indoor forcing will not hurt the shrub at all. Forced branches, often seen at this time of year in high-end florists, are an easy way to get an early dose of spring.

For best results when forcing, cut branches of early blooming shrubs such as forsythia, witch-hazel or quince. Others, such as magnolias and cherries, will work well too, but cutting these closer to their natural bloom time will ensure greater success.

Look for branches that are at least 12 inches long and that have swollen buds. Cut the branches on a day when temperatures are above or near freezing. Bring the branches indoors and submerge them overnight in a large container or bathtub in cool water. Next re-cut the ends of the branches while holding them under water to prevent air from entering the stems. Make several cuts into the stem, which will allow the branch ends to soak up water but keep air out. Keep the branches in a well-lit room that is at or below room temperature and mist the branches daily. Increased humidity will prevent the buds from drying out. Your branches will begin to show signs of swelling in a few days and, depending on the type of shrub, should be flowering in one to three weeks.

It's Easy Being Green: A Handbook for Earth-Friendly Living

Home & Garden - Late Winter Is Time for Pruning and Forcing