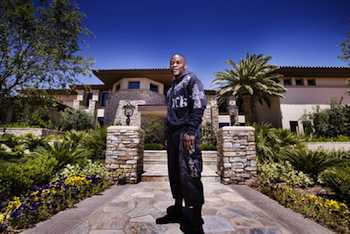 Although boxing is an individual sport, the champions with the most belts are the product of teamwork. Managers, dietitians, trainers and promoters all play integral roles behind the scenes for months before the boxer stands alone in the ring.

For six-time undefeated champion Floyd Mayweather Jr., it's the same with his Las Vegas, Nev., home. Each of the members of what he calls "Team Mayweather" contributed to the designing, building, customizing and furnishing of this 22,000-square-foot abode. And after more than two years of construction, only one man would finally call it home--Mayweather.

"I'm all alone in this big castle," he says, crediting Leonard Ellerbe (his business advisor), Tanasha Pettigrew (his personal realtor) and local Las Vegas real estate agent Tanya Murray with helping to create a home "built for a king."

Pettigrew says that for all Mayweather's willingness to share credit, the person most responsible for the design of the home is the champ himself.

"There was a designer, but she mostly assisted Floyd," says Pettigrew. "He's precise, he knew what he wanted, and he was extremely involved in the entire process."

That meticulousness is carried throughout the contemporary three-story house. Nearly every detail is customized to the boxer's liking. Every lighting fixture is Swarovski crystal, every sconce by Baccarat. Each bathroom has a different theme, the walls are finished with Venetian plaster, the glow-in-the-dark balls in the billiards room boast the boxer's name.

Mayweather's four children have their own rooms when they come to visit their father.

"Every Sunday, I like to take my oldest daughter skating," says the 33-year-old champion. "I like to go bowling on Sundays--the regular things everyone else likes to do."

His 2,000-square-foot closet is replete with , and Tom Ford.

"He loves couture, and he hardly wears the same thing twice," says Pettigrew. "After he dons sneakers a couple times, he gives them away to his local charity, the ."

Mayweather's favorite room in the home is the bi-level theater with an upstairs VIP loge. Red leather couches complement the matching suede walls. Downstairs, retractable doors in the back of the house lend an indoor/outdoor vibe. It's a "smart" house, too.

"Floyd can be in his car and see every security camera in the house, he can set the heat, arrange the lighting, program the TV, turn on fireplaces," says Pettigrew. "His phone is a remote control for the entire house."

To keep it all clean, Mayweather hired two different teams of housekeepers in addition to the personal housekeeper he has employed for the past 15 years.

"It's too much for a single person to clean," he says. Every other week, window washers wipe down the 60-foot floor-to-ceiling panes inside and out.

"He doesn't dirty up the house at all," says Pettigrew, "but likes everything to be done just right." The kind of attention to detail that has made him a champion in the ring has given him a keen eye when it comes to his home. "He can scope out something that's off by half an inch. If there's even the smallest chip in the paint, he'll notice it."

Less than a year after the home was completed, Mayweather was already making changes. He swapped out the carpets so he could have the same floor coverings in his home that he saw at the M Hotel in Las Vegas. And he ordered his own unique aromatics to be piped through the air-conditioning system, another feature he borrowed from high-end hotels.

Despite all his success and the luxuries his accomplishments have brought him, Mayweather remains grounded.

"This is a blessed home; I earned it with hard work and dedication," he says. "I wanted to help my mother and family out of a rough situation, and God blessed me with the boxing ability, so I took my boxing to the next level. And, here we are today, making millions from legalized street fighting."

It's Easy Being Green: A Handbook for Earth-Friendly Living

When celebrities finally get home they want to enjoy the fruits of their labor and be somewhere that no place in the world can offer them: home. MH+L is granted exclusive access to showcase the real world of celebrity. From actors and directors, singers and songwriters to athletes and agents, artists and performers, kings and kingmakers, MH+L is a window into the up-close-and-personal world of all facets of celebrity living. Sit back and enjoy the view.