America Is Fatter Than Ever - Obesity & Overweight 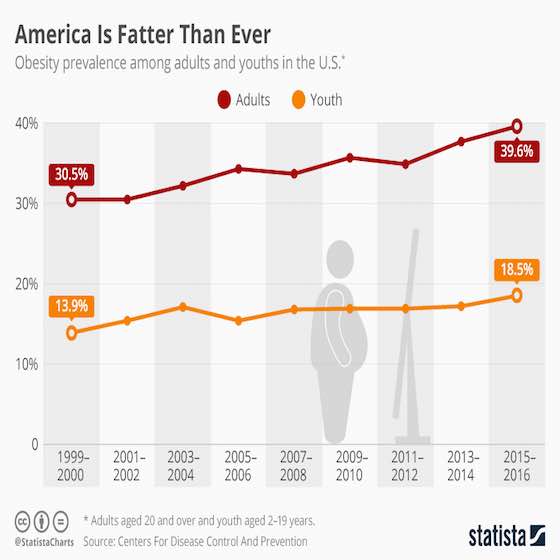 America Is Fatter Than Ever - Obesity & Overweight

Tired of feeling tired all day? Just follow the tips below and you'll be well on your way to a peppier outlook -- no coffee, tea, or energy drinks needed!

The United States is now officially fatter than ever.

Nearly 4 in 10 American adults have a body mass index classifying them as obese, according to troubling new figures released by the Centers for Disease Control and Prevention. Since the turn of the century, adult obesity rates have continued to climb, going from 30.5 percent in 1999-2000 to 39.6 percent in 2015-16. Younger Americans are also piling on the pounds with the youth obesity rate also reaching a record 18.5 percent.

The youth trend is one of the most disturbing aspects of the research, given that younger people are more likely to stay obese and that childhoold obesity is linked to an early death in adulthood. One in ten preschoolers aged 2-5, one in five children aged 6-11 and one in five adolescents aged 12-19 fall into the obesity category. This is all just part of a massive problem across U.S. society. Over 70 percent of Americans are either overweight or obese, meaning people with a normal weight level are now a minority.

Health & Wellness "America Is Fatter Than Ever - Obesity & Overweight"