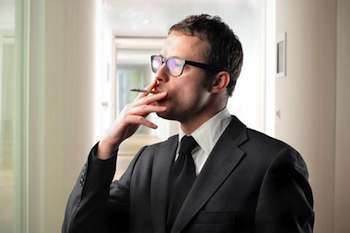 Caption Exhaled tobacco smoke contains hundreds of chemicals, some known to cause cancer

Tobacco smoke from other folks' cigarettes, cigars, and pipes can be bad for your heart. In the catalog of cardiac villains, smoking is still a leading cause of heart disease, even though fewer people are smoking these days. That's a testament to the hazard of this habit. It's also because its effects don't stop with the smoker; they extend to anyone who breathes air polluted by smoke from a cigarette, cigar, or pipe.

Secondhand smoke isn't an innocuous byproduct of smoking. This mixture of freshly burnt tobacco and exhaled smoke contains hundreds of chemicals, including formaldehyde, benzene, carbon monoxide, ammonia, arsenic, and lead. Some are known to cause cancer. Others are highly toxic to cells all over the body.

In the U.S. Surgeon General's comprehensive report, "The Health Consequences of Involuntary Exposure to Tobacco Smoke," an expert panel estimated that nonsmokers' exposure to secondhand smoke at home or work:

Causes asthma or triggers asthma attacks in children and adults

Is responsible for 50,000 deaths each year in the United States

Secondhand smoke is almost as bad for nonsmokers as smoking is for smokers. Breathing secondhand smoke can lead to heart disease, lung cancer, asthma, and other conditions.

Technology doesn't help. The only way to steer clear of the harmful effects of secondhand smoke is to avoid it.

The U.S. Surgeon General has called smoking the leading preventable cause of disease and death in the United States. It has long been linked with lung cancer, and continues to be the prime cause of this disease. But its effects aren't limited to the lungs.

Since the mid-1980s, studies have shown that secondhand smoke can start or promote artery-clogging atherosclerosis in the coronary arteries, the blood vessels that deliver oxygen and nutrients to the hardworking heart muscle. It does the same thing in the carotids and other arteries that nourish the brain. It stiffens blood vessels throughout the body, making the heart work harder.

Secondhand smoke also immediately affects platelets in the bloodstream, making them more likely to stick to each other and form circulating clumps. These clumps can be the nucleus around which artery-blocking blood clots form, causing a heart attack or stroke.

A mystery about secondhand smoke is how it can cause nearly the same level of cardiac problems as smoking. A leading idea is that even brief exposure to secondhand smoke can rapidly make arteries less flexible and promote the formation of blood clots. This double whammy could trigger a heart attack or stroke, especially in nonsmokers who already have heart disease.

If you live with a smoker, the best thing you can do is persuade him or her to quit, and then help in any way that you can.

Nicotine is so addictive that many smokers, even those who desperately want to quit, can't. If you live with a smoker who can't or won't quit, ask him or her to smoke outside or just in one room that no one else needs to use. Air cleaners and other technologies that filter out smoke or clean the air can't eliminate the hazards of secondhand smoke, warns the Surgeon General's report.

A study from the in California suggests that tobacco smoke poses a hazard even after it has dissipated. Nicotine in smoke residue clings to walls, carpets, clothing, and other surfaces. It can react with nitrous oxide, a common indoor air pollutant, to form cancer-causing compounds called tobacco-specific nitrosamines that can persist for months (Proceedings of the , published online ).

The workplace can be a big source of exposure to secondhand smoke. If your business allows smoking at work, talk with your managers or, if appropriate, labor union about putting into place changes that protect nonsmokers. A smoke-free policy is best for everyone's health, and for the company's bottom line, but that may take some doing. Even setting up a designated smoking area that nonsmokers never need to enter is a good start.

On a larger scale, smoke-free laws and ordinances in 20 states and scores of cities help everyone breathe easier. If you live in a place without smoke-free regulations, let your representatives know you want them. Patronize businesses that don't allow smoking. Thank the owners for this healthful service.

Secondhand smoke is much more than a smelly nuisance. It's a serious public and personal health problem that needs to be treated as such. - Harvard Heart Letter