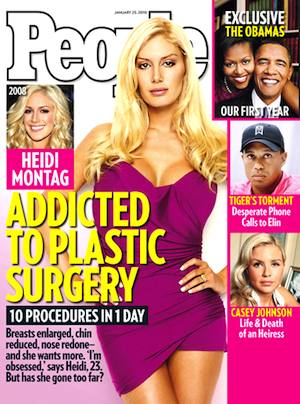 Hollywood sends a terrible message to young people with the way it celebrates plastic surgery and rail thin models.

It's sad to watch a seemingly normal girl like Heidi Montag turn into a superficial, appearance-obsessed Hollywood type.

I never really understood plastic surgery anyway because it is so obvious when someone gets it done. Everyone knows that's not really what you look like. What's the point? Our flaws are what make us beautiful and unique.

I don't think that she should have gotten surgery. She was beautiful as she was before all of the surgeries. I can't believe that [Montag's husband] Spencer allowed her to get surgeries. I am a 14-year-old girl, and any friend of mine would have to think twice before asking my opinion on plastic surgery. I don't understand these celebrities. They have all of this money and don't know what to do with it. It's unreal. They waste it on stupid things like plastic surgery. Use it on something useful like Haiti, or one of the other countries that is in need of our help. Wasting money on stupid things...what is this country coming to?

Sadly for Heidi, the surgery has actually made her look more like 43 and not 23. She claims that she always promotes "beauty from within." Clearly! With 10 procedures in one sitting? I don't think so...I also love the title of her new album, Superficial. Couldn't put it better myself.

The thing is, she [Heidi Montag] has completely lost her marker of what looks good. She just looks plastic, and that's not nice. She also (especially in other pictures I've seen), looks at least 10 years older than she is, which I expect is not what she was going for! However, [she] should not be blamed; it's the irresponsible surgeons who agree to do surgery (all of which can be life-threatening) on a 25-ish-year-old, with no disfigurement at all. They are money-grabbing, unethical, disgusting people. How they got through medical school without anyone noticing that they were not in it for the right reasons is beyond me.

Now more than ever I appreciate my flaws. That's what makes me...well, me! And I don't want that to change. I feel pity for [Heidi Montag]. I saw both interviews she did and there must be pangs of regret that she is not admitting to. Now she is broke, judged, and criticized. It's due to all these procedures she has done. And no one can be satisfied with that.

She doesn't look like Heidi Montag anymore! She looks like someone else who we don't know. I bet Spencer is sad. The woman he loved no longer looks like herself anymore, and on purpose. She had a unique and very pretty look that was hers...I feel so sad for her mother who must feel she has lost her daughter partly. Just like Kathy Griffin--too much surgery destroys their own uniqueness which made them special! The doctor really should have said no. How very sad.