The Gift of Garlic 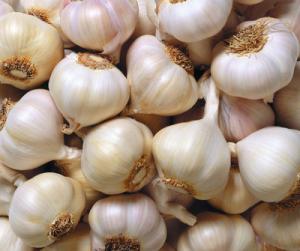 On a recent evening, in the rush to make a healthy dinner, I found myself crushing several large cloves of garlic that a good neighbor had just given us from his own cache of stored garlic grown in his back yard.

He had stored it well, but this variety was not a long keeper and needed to be consumed before it began to sprout on its own.

Ever thankful for the gift of garlic, I looked out the kitchen window to our own small garden plot, now under a foot of Michigan snow; I knew a few hundred similar cloves that my two small children and I had planted in October were doing well there, holding out until spring to be about the first green things to greet us.

That warm thought was overpowered by the head-clearing pungency of crushed garlic wafting up from the cutting board. What potent stuff, I thought--along with ginger, wasabi, chilies, and horseradish, this is the only ethnic cleansing the world should ever know.

Garlic is prized as a culinary ingredient and herbal remedy by virtually every culture.

The written and unwritten record of its virtues reaches back thousands of years.

They buried it with pharaohs and fed it to slaves building the pyramids. It flourishes still in the national dish of Egypt, ful medames , where, crushed with olive oil, fava beans, parsley, lemon, and garlic's first cousin, the onion, it is revered as breakfast food to carry you through the day, especially when fasting for Ramadan.

The Bible relates that when led from Egypt, the Israelites told Moses that they could hardly live without it. The ancient Greeks and Romans took to the raucous charms of garlic and fed it to their athletes, soldiers, and workers, while spreading its cultivation throughout Europe.

Equally revered throughout all of Asia as both food and medicine, garlic does, however, run afoul of certain Hindu and Buddhist sects. It is considered so potent that it is either forbidden outright or its use is banned during certain holidays and weddings, lest it stir the baser emotions and cause more social disruption than mere garlic breath alone.

Just the smell of crushed raw garlic feels as if it dilates every blood vessel in your brain and body and could rout the most recalcitrant cancer. Yet years of clinical studies have produced mixed results in proving the vascular-health-promoting properties of garlic and identifying the mechanisms by which it might work.

Yes, garlic is a proven antimicrobial edible that also enhances general immune function and blood flow. And it does seem to be a boon to cardiovascular health. Garlic increases body levels of hydrogen sulfide, which plays a variety of signaling roles that lead to relaxed arteries and improved blood flow. It has anti-inflammatory properties. And it contains organosulfur compounds now under study as anticancer agents, especially in the gastrointestinal tract and prostate.

It is these same sulfur compounds that give garlic its overpowering and often unwanted lingering aroma. Garlic, botanically known as Allium sativum, is in the onion family, as are shallots, leeks, and chives, all of which contain lesser amounts of the same bioactive sulfur compounds, along with healthful flavonoids, B vitamins, and significant levels of manganese and selenium.

Crushed garlic yields allicin, one of many sulfur compounds but considered the most potent and the most likely agent of garlic's health effects. An antioxidant as well as an antimicrobial, it has also been shown to inhibit the synthesis of LDL cholesterol (the bad stuff) in laboratory tests and animal studies. The active sulfur compounds are most present in raw garlic, and diminish -- along with their pungency -- the longer garlic is cooked.

Perhaps the most significant study of garlic's medicinal prowess raised more questions than it answered.

A 2007 study, conducted by researchers at Stanford University Medical School (Palo Alto, California) and published in the Archives of Internal Medicine, was the most thorough double-blind test of its kind. Nearly 200 subjects with mildly elevated levels of LDL cholesterol were followed for six months on a regimen of garlic or placebo. Test subjects received one of three forms of garlic: the fresh stuff, powdered garlic in the form of pills, or aged garlic extract.

Contrary to the expectations of the scientists and garlic fanatics alike, the study revealed no significant change in cholesterol or blood lipid levels in any of the groups, perhaps because they weren't high to start with. Yet the article itself, an accompanying editorial, and many other researchers maintained that the results did not disprove garlic's ability to improve general cardiovascular health.

Garlic is known to be a potent blood thinner that in sufficient amounts can complicate surgery and interfere with certain medicines.

Numerous other studies have already demonstrated garlic's ability to reduce the deposition of plaque in arterial walls and to lower blood pressure, two effects that may help protect against loss of brain function in aging and preserve cognitive abilities.

Though garlic's exact mechanisms of activity and efficaciousness have yet to be fully established, most researchers agree that science has only just begun to understand how its phytochemicals--like those of many other healthful herbs and plants--interact with our own bodies and activate various gene switches, both in healthy and cancerous cells.

Along with its pungency, here's one irony to savor about garlic:

How does a substance with such a powerful presence remain, for now, a subtle and mysterious agent of health?

Getting The Most From Garlic

Garlic remains a demure bulb until its cloves are peeled and enzymes within are activated.

The aromatic compounds in garlic undergo conversion and are released when the cell walls of a clove are breached by crushing or chopping and the contents oxidize. This is why we cry when chopping onions, garlic's first cousin.

In order to maximize the phytochemical power of garlic, it should be allowed to sit for at least several minutes after being crushed or chopped.

The more finely garlic is chopped or crushed, the more healthful properties are activated--and the more that are retained in cooking.

Crushing or chopping releases the enzyme allinase, which in turn stimulates the formation of allicin, which then breaks down to a variety of healthful compounds; crushing allows allicin to work before being degraded in cooking.