Strength Training A Healthy Addition to Your Exercise Regimen 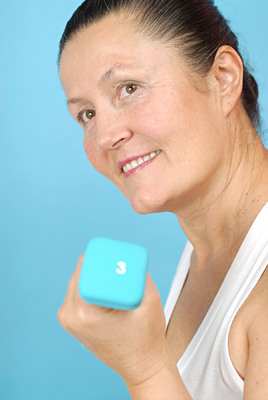 We walk, run, and swim for health reasons. But a well-rounded exercise program needs to include strength training, too.

Exercise is on every to-do list we can think of for staying healthy, and there's pretty wide agreement on how much is necessary.

The physical activity guidelines issued in 2008 by the federal government echoed other guidelines by recommending that American adults get at least two and a half hours of "moderate intensity" aerobic exercise a week. Aerobic exercise is any repeated motion that increases your heart and breathing rates so that more oxygen reaches your muscles.

Walking at a fast pace of three to four miles per hour (three is brisk; four can feel downright fast) is often held up as the beau ideal of moderate intensity: inexpensive, no special training or equipment needed, and manageable by many, although many may need to work up to the full weekly amount. The government guidelines have made it even easier by giving us license to get this exercise in 10-minute allotments.

Given the multiple benefits -- the lowering of the risk of heart attack, stroke, and diabetes; protection against some forms of cancer (notably colon cancer); deflection of depression; important assistance in weight control -- could there be a more effective medicine?

But there are other types of exercise we should be doing that may get overlooked in the enthusiasm for exercise-lite. Exercises to improve and maintain our balance, for example, and those that help keep us flexible.

The government's physical activity guidelines say all American adults should be doing muscle-building exercises at least twice a week. These exercises are supposed to be of moderate or high intensity and involve all major muscle groups. They would most commonly involve a light weight-lifting program of some kind.

Exercise to tune and bulk up muscle may seem a little out of place as health advice. We tend to associate strong muscles with pumping iron, chiseled physiques, and most recently, sleeveless dresses and the right to bare arms.

But many researchers argue that strength training (another name for muscle-building exercise) for health reasons hasn't been emphasized nearly enough. In fact, for older people, it may be even more important than aerobic exercise, because research has shown that it could prevent falls and disability.

Researchers at and elsewhere are testing variations on standard strength-training programs that build muscle power (velocity as well as strength) and strengthen muscle groups used in everyday activities like climbing stairs. The hope is that such programs will do even more to keep older people healthy and mobile.

OLDER AND WISER, BUT ALSO WEAKER

The gradual, age-related decrease in muscle tissue called sarcopenia starts at the depressingly young age of about 30.

The average 30-year-old will lose about a quarter of his or her muscle strength by age 70, and half by age 90. Some studies show an even steeper drop off that accelerates rapidly in our 70s.

The character of muscle tissue changes with the march of time, too. We lose more of the fast-twitch fibers that allow us to make quick, powerful movements than the slow-twitch ones that provide endurance. Our muscles also become less lean, as fat tends to collect among the muscle fibers, especially if we add pounds as well as years.

Animal studies suggest that some of the changes in aging muscle can be traced to muscle cells losing mitochondria, the "power plants" of cells. The nerves that stimulate muscles into action also degrade, so the signals for muscles to move aren't as well transmitted. All in all, not a pretty picture.

The good news is that exercise will counteract these effects. A study done in the 1990s showed that older men who had been weight lifting for a dozen years or more had muscle tissue that was almost indistinguishable from that of men who were 40 to 50 years younger.

The bad news: Age does diminish the returns. The results have been mixed, but several studies have found that if you put young and old people on the same strength-building program, the muscles of the young will gain more size and strength than those of the older people.

Strength training goes by several names: resistance training, progressive resistance training, weight training, muscle strengthening. The notion of resistance comes from the fact that your muscles are straining against an opposing force -- gravity, for example, if you're lifting a weight. In the typical program, you do the same weight-lifting exercise eight to 12 times, rest for a minute or two, and then do the exercises again.

The exercises are often referred to as "reps" (for repetitions) and the groupings as sets. Muscles have to strain to get stronger, so you are supposed to choose the amount of weight that allows you to do only the eight to 12 reps -- and the last couple of them should be difficult. Two or three sets of each exercise are usually recommended. As you get stronger, you're supposed to add more weight.

Because muscle needs time to recover, it's best to limit yourself to two or three workouts a week. One reason athletes get stronger when they take anabolic steroids is that they can work out more often, because steroids shorten recovery time.

Strength training (without steroids!) has benefits beyond increasing muscle size and strength. Results of a Swiss study published in 2009 in the journal Circulation showed that strength training had the same effect on blood vessel function as aerobic exercise, and other studies have shown a modest, but real, lowering of cholesterol levels and blood pressure levels. It can ease joint pain by strengthening the surrounding muscles, although arthritis patients need to be careful about not overdoing it.

Getting stronger has been shown to help with blood sugar control in people with diabetes, but results from a Canadian study reported in 2009 in The Archives of Internal Medicine showed that a program that combined aerobic and strength training was most effective at combating insulin resistance, which often precedes full-fledged diabetes.

Most traditional strength-training programs, and especially those for older people, don't emphasize the speed at which the exercises should be done. As a result, they increase muscle strength, but not necessarily muscle power, which is a function of both how much force a muscle can produce and the velocity at which it can do it. Muscle power declines even faster than strength as we age.

And in several studies, muscle power has been more strongly associated with loss of mobility and falls than strength alone. That makes sense. Muscle power, not just strength, helps with everyday activities like climbing stairs because it allows you to transfer weight from one leg to the other relatively quickly, so you're less likely to teeter and lose your balance. And think about when you stumble slightly: whether you fall or not depends on how quickly your muscles react and compensate for the loss of balance.

A strength program can be adapted to produce more power simply by doing a component of each exercise at a faster speed. It's been a challenge, though, designing safe modes of power training for older adults.

Dr. , an assistant professor in the at , has conducted a number of studies of a program specifically designed to improve muscle power, especially that of the leg muscles. It involves wearing a weighted vest -- adding weight to the torso instead of the arms or legs helps people keep their balance during the exercises -- and "task specific" exercises related to day-to-day activities such as getting out of a chair or climbing stairs.

Dr. Bean and his colleagues reported results in of a study that compared the program -- dubbed InVest, for Increased Velocity Exercise Specific to Task -- with a more traditional one developed by the . After 16 weeks, strength and other gains from the two programs were about equal, but the people who did the InVest exercises had greater improvements in limb power.

Strength training isn't a vanity project. It's now recognized as a crucial part of a well-rounded exercise program that will help offset the natural tendency to lose muscle as we get older. Muscle power -- strength plus velocity -- may be more important than strength alone, and you should explore safe ways to add some power moves to your muscle-building workout.