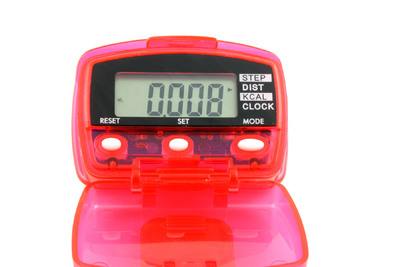 Pedometers count the number of steps you take.

Counting Every Step You Take

Almost everyone needs to get more exercise, and walking more may be the easiest way to do it. You don't need lessons. Equipment? A good pair of shoes is about all that's required. Arthritic knees and hips certainly make it harder, but not impossible if you start gradually and wear shoes with plenty of cushioning.

But knowing all this doesn't necessarily make us walk more. Some exercise researchers say we're naturally sedentary creatures, evolved to be couch potatoes long before there were couches (or potatoes). Inactivity is often reinforced by living circumstances.

There's been a lot of research lately into the health effects of "built environments," and studies have shown that people who live in suburbs and depend on cars to get around get less exercise than those who live in places with sidewalks and nearby shops.

If you're in a nonwalking inactivity rut, wearing a pedometer might be one of the least expensive and most effective ways to climb out of it. Compared with today's smart phones and iPods, pedometers are humble little devices that count the number of steps you take. More elaborate models tell the time, calculate how many calories you've burned (based on your weight), and keep daily step tallies over an entire week.

Research has shown that pedometers are a good motivational tool, although maybe not by themselves. Several randomized trials show that it's the combination of wearing a pedometer and having a goal that's most effective. A common one is 10,000 steps a day, which is equivalent to about five miles, depending on the length of your stride.

The enthusiasm for pedometers has hit a couple of speed bumps lately. Some studies have shown that less expensive models tend to undercount steps at a slow walking pace and when they're worn by heavier people, probably because a bulging waistline tilts them at an angle that affects the step-counting mechanism inside. Heavy people would be among the prime beneficiaries of a walking program, so this is a setback for pedometers and some well-intentioned walking programs that depend on the low-cost models.

10,000 steps a day is a good goal. Walk at a fairly brisk pace of 3 mph to get health benefits from walking.

You can buy a good pedometer for as little as . The piezoelectric models that "work at any angle" cost more but may be more accurate and easier to use.

A "Delightful And Comforting Companion"

Some sources trace the history of the pedometer back to sketches made by . The Swiss watchmakers who invented the self-winding watch are credited with coming up with the basic, motion-sensitive mechanism. Pedometers were first used to promote physical activity on a large-scale basis in the mid-1960s in .

Walking clubs had sprung up in the country, and a company there began making a pedometer it called Manpo-kei, which means "10,000 steps meter." So while the 10,000- step goal is a good one, it was picked partly because it made for a catchy name.

Pedometers have been the subject of hundreds of journal articles and commentaries. The first one we found was a letter published in Science in 1912 that took the to task for characterizing the pedometer as "little better than an ingenious toy" and defended it as a "delightful and comforting companion to those who know the joy of seeing the world a pied."

Much of the research has focused on the pedometer as motivator and, by and large, the findings indicate that it is. In 2007, researchers took the bird's-eye view, gathered up 26 different studies and summarized the results in a paper published in The Journal of the . Their synopsis showed that, at least in studies, pedometer users walk more than 2,000 additional steps each day than nonusers, and their overall physical activity levels increase by 27 percent.

Other research has shown that exercise advice given to patients by doctors might be more effective if a pedometer were part of the prescription and that pedometers can be part of a successful program to encourage low-income mothers to exercise.

Not every study has been so positive. A British review of interventions to promote walking published the same year as the review noted that the effect of the pedometer on walking may wane as time goes on -- a problem seen with many exercise programs.

Norwegian investigators reported findings that found no difference in results for people who wore a pedometer, and those who were instead counseled to increase the amount of time they walked each day. Their argument: It may not be pedometers per se that get people walking so much as regular counseling and having a goal. That's actually quite consistent with something the researchers discovered: The three pedometer studies that did not include a step goal showed no significant improvement in physical activity.

Few of these studies explored in any depth why pedometers are good motivators. One hunch: A pedometer puts a number to our physical activity efforts, and most of us respond to the concreteness of numbers, especially when it comes to exercise. Runners count miles, and swimmers, laps -- and now walkers, with the help of pedometers, their steps.

Some experts invoke the self-efficacy theory as an explanation. In simplified terms, self-efficacy means having confidence that you can perform a task that's set before you. What we're asked to do when we wear a pedometer is to take more steps -- not a daunting prospect for the average person. Walking 10,000 steps a day may seem like a lot but it is within reach given that many of us already take between 6,000 and 7,000 steps daily.

Put another way, those additional 3,000 to 4,000 steps add up to about a mile and a half, a distance most of us can cover in about 30 minutes. In busy lives, that's not an inconsiderable amount of time, but we can find it, especially when you consider the exercise guidelines that say we can divide up that 30 minutes into 10-minute chunks and still get health benefits.

The average stride is about two-and-a-half feet long, although it might be a bit shorter for women, on average, than men because they tend to have shorter legs.

A reasonable goal for most people is to increase their average step count each week by 500 per day (a quarter of a mile) until they can average 10,000 a day with ease.

Bring On The Bells And Whistles

It's not hard to find a pedometer to buy these days. Any large sporting goods store sells them, and you can buy them online from or from several Web sites that specialize in pedometers. The problem is making a choice: Amazon sells a couple of dozen different pedometer models

, and the specialty Web sites have even more.

Despite all the variation, the internal workings come in just two basic varieties: those that use a spring-suspended horizontal arm that moves up and down with the hips, and those that sense acceleration with a cantilevered mechanism that presses on a piezoelectric crystal that generates voltage when compressed.

Pedometers with the spring-suspended mechanisms (sometimes called spring-levered or, not quite accurately, a pendulum mechanism) need to be kept perpendicular to the ground to count steps correctly. You can keep them in a hip pocket, but as a practical matter maintaining the vertical position may mean clipping them to a waistband or belt. The piezoelectric pedometers can be worn at any angle.

The spring-suspended pedometers are less expensive than the piezoelectric pedometers, but some researchers have found them to be less accurate, missing steps at slow speeds and when worn by overweight people, possibly because they weren't worn in the vertical position. A British group published a report in 2009 that called a spring-suspended pedometer "unacceptably inaccurate" for a walking promotion campaign after tests showed it undercounted steps.

We tried wearing both types of pedometers. It was a real advantage of the piezoelectric model that we could throw it into a pocket and forget about it -- except when we wanted to see how many steps we had taken. It seemed a bit generous: our step count for the day went up just from some movements we made while sitting at the computer typing. But researchers have found that fidgeting can influence body weight, so perhaps we were just getting credit that we deserve for some chairbound physical activity.

We also tried out an inexpensive spring-suspended model that was flimsy and miscounted steps right from the start. If you wear it all day, a pedometer is going to get banged around a little. We recommend buying one that is sturdy.

Both types of pedometers come in versions that allow you to keep track of the distance you've traveled (not just steps), the calories you've burned, and the step counts for several days in a row. We were ready to dismiss these as needless bells and whistles, but we ended up liking the extra features. It added to the fun and interest of step counting.

For these functions to work, you'll need to enter in your weight, height, and stride length, so be ready with that information before you start setting up your pedometer. It's easy to calculate your stride length. Mark out a distance on the floor (say, 10 feet) and divide by the number of strides it takes to walk it.

The set-up is a button-pushing process that's not much more complicated than setting up a digital alarm clock, but it does take time and a certain amount of attention, and the controls are small. It will be easier if you're not rushed and set aside time well before you head out on your walk. - Harvard Health Letter