Why Drinking Coffee May Be Good for You 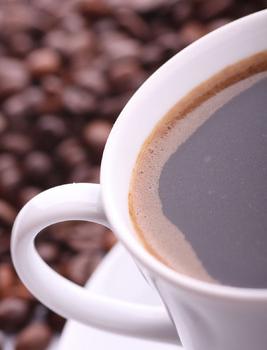 Is Coffee Bad for You?

Actually, Drinking Coffee May Be Good for You; Excess coffee consumption is bad for pregnant women, but it may benefit health in certain other groups.

It's believed to improve mood, alertness, and energy. But is coffee bad for you?

Despite past concerns about coffee, tea, and other sources of caffeine being detrimental to health, recent research suggests that regular coffee consumption may reduce the risk of health conditions such as type 2 diabetes, Parkinson's disease, and liver cancer -- and regular coffee drinkers might even live longer.

"For most people [who] choose to drink coffee, the benefits probably outweigh the risks," says Donald Hensrud, chair of the division of preventive medicine at the Mayo Clinic in Rochester, Minn.

"In the past, a lot of people have tried to improve their health by cutting down on coffee," says Rob M. van Dam, assistant professor of nutrition and epidemiology at the Harvard School of Public Health. But that's probably an unnecessary sacrifice. Although experts once thought caffeine was harmful, recent "studies have been largely reassuring," he says. In the past, it has been hard to differentiate the health effects of coffee versus those tied to smoking cigarettes, since heavy coffee drinkers are more likely to smoke than other people.

Coffee is "not only a vehicle for caffeine," says van Dam. "It has a lot of other components."

It's likely that those other components -- such as antioxidants and fiber -- account for some of coffee's health benefits, experts say. "We always hear about tea, and especially green tea, being a good source of antioxidants, but it's been reported that coffee may be the largest source of antioxidants among people who drink it," says Hensrud. More research is needed to understand how these other ingredients might benefit health among coffee drinkers.

Experts say that caffeine should be avoided or limited during pregnancy. Drinking coffee during pregnancy has been linked to lower birth weight and an increased risk of miscarriage and stillbirth, though there is no proof at this point that caffeine causes miscarriages, according to the American College of Obstetricians and Gynecologists. "We don't really know what the health effects of caffeine are for the fetus," van Dam says.

For those loyal to coffee, even quitting for the sake of their babies can be difficult. Zena Elizalde, 28, of Owings Mills, Md., said she struggled with giving up caffeine when she was pregnant, but she did cut back to one cup per day, half caffeinated, half decaffeinated. Since delivering a healthy baby in January, Elizalde is back up to her usual three-cups-per-day routine. She has her first cup at 8 or 9 a.m., another at 2 p.m., and a third at 5 p.m., when she heads to her second job. Without coffee, "I would feel like my day hasn't started," she says. "It gives me my jump-start for the day."

Aside from pregnancy, experts say that reasonable caffeine consumption doesn't seem to pose a threat to good health. But the caffeine in coffee is addictive, and the signs of withdrawal that coffee drinkers experience if they skip a few days are evidence of that, experts say.

"We know that caffeine is the most widely used mood-altering drug in the world," says Roland Griffiths, a professor in the departments of psychiatry and neuroscience at the Johns Hopkins School of Medicine, who has studied caffeine extensively. "It is estimated that as much as 80 percent of the world's population consumes caffeine in one form or another."

Some studies suggest that drinking coffee may act as a trigger for heart attack among certain infrequent coffee drinkers, though more research is needed to confirm this.

In any case, that potential risk is one that seems to dissipate in chronic coffee drinkers.

In people who haven't been coffee-drinkers, if "they start using caffeine, you see a pronounced increase in blood pressure," van Dam says. But after a week or so, this effect is "much less pronounced than it was initially. ... There's still a bit of an elevation in blood pressure, but it's pretty modest," he says.

The Nurses' Health Study, a long-running research project involving 238,000 nurse participants that looks at what influences women's health, examined consumption of coffee in relation to the development of high blood pressure and did not find a connection, according to results published in 2005 in the Journal of the American Medical Association.

There's still some reason for caution when it comes to how unfiltered coffee might impact health.

Research has shown that high consumption of unfiltered French press and boiled coffee may drive up LDL cholesterol, according to a review study published last year by van Dam in the journalApplied Physiology, Nutrition, and Metabolism. This is because of cafestol, a compound found in brewed coffee. Higher amounts of cafestol are found in boiled, Turkish, Greek, and French press coffee; intermediate amounts are found in espresso; and low amounts are found in instant and paper-filtered coffee.

For people worried about developing type 2 diabetes, it might not be a bad idea to drink coffee, research suggests.

In his review in Applied Physiology, Nutrition, and Metabolism, van Dam says, he found that "people who drank a lot of coffee had a substantially lower risk of type 2 diabetes than people who don't drink coffee." It's likely that another component of coffee -- not caffeine -- produces this effect since it was observed in all coffee drinkers, whether they drank caffeinated or decaffeinated coffee.

Coffee consumption also seems to decrease the risk of stroke and may help prevent skin cancer, research shows, and it may offer a protective effect against Alzheimer's disease, though more study is needed to confirm this result, according to a 2007 review published in Neurological Research.

Regularly drinking coffee also appears to help prevent Parkinson's disease, but this benefit may not occur in postmenopausal women who are taking estrogen replacement therapy, reports a study published in 2004 in the American Journal of Epidemiology.

For those who already have diabetes, the news is less encouraging.

"Giving people caffeinated coffee did exaggerate blood sugar response to meals, which suggested it may be more difficult for people with type 2 diabetes to keep glucose levels in check" if they drink coffee, van Dam says. A possible solution is for diabetics to switch to decaffeinated coffee.

Drinking coffee doesn't seem to increase the risk of bladder, gastric, renal, or breast cancer, and it may actually help provide some protection against liver cancer. Some research shows an association between drinking coffee and lower blood concentrations of biomarkers that indicate liver damage. This result was consistent whether or not people had a history of liver disease, and it's unclear whether this is due to caffeine or some other component of coffee. More research is needed to determine whether there is a true cause-and-effect relationship between drinking coffee and decreased risk of liver cancer.

For many people, there's nothing bad about enjoying a cup or two a day of coffee. Indeed, a moderate amount of caffeine -- two to four cups of brewed coffee (200 to 300 milligrams) per day -- is probably safe, according to the Mayo Clinic. But heavier amounts of coffee -- say, four to seven cups (or 500 to 600 milligrams of caffeine) per day -- may result in difficulty sleeping, nervousness, irritability, nausea, a fast or irregular heartbeat, headaches, anxiety, or muscle tremors.

For those who experience side effects of caffeine -- insomnia or headaches, for instance -- it may be best to avoid it or limit consumption.

If those side effects get to be overwhelming, or you're just ready to kick the coffee habit, it is possible to slowly reduce your coffee intake without experiencing bothersome signs of withdrawal.

Johns Hopkins offers an experimental caffeine withdrawal treatment program, in which participants gradually reduce their caffeine intake by 10 to 20 percent per week. "We do that by having them gradually substitute in noncaffeinated versions of what they're consuming," Griffiths says. Over the course of several weeks, he says, "most people can emerge from that caffeine free without experiencing many substantial withdrawal symptoms."

If you don't see yourself giving up coffee anytime soon, it's a good idea to try to estimate how much caffeine is in your cup, particularly if you buy yours at a restaurant or coffee shop.

The Starbucks website, for instance, lists nutrition information, including the amount of caffeine and calories contained in their beverages. While caffeine content can vary greatly depending on who makes it and what type of bean is used, for instance, a general rule of thumb in the United States is 100 milligrams of caffeine per 6 ounces of coffee, Griffiths says.

[ Also: How to Kick the Caffeine Habit and Kick Up Your Energy Level ]

Drinking Coffee May Be Good for Your Health - Healthy Diet