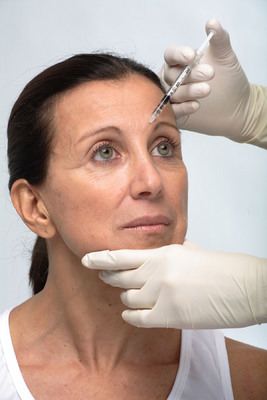 Whether Botox is used for cosmetic or medical purposes, its effects are temporary, so repeated injections are necessary

At one time, most of us knew about botulinum toxin mainly as the source of deadly botulism food poisoning. Produced by the bacterium Clostridium botulinum, the toxin is one of the most lethal substances on earth. Ingested, it can paralyze muscles throughout the body, including those that control breathing. Yet on a smaller scale, the same mechanism can do a body good. Injected into muscle tissue, for example, botulinum toxin can ease debilitating spasms and pain.

The Many Uses of Botox

Today, most of us are familiar with botulinum toxin as Botox, the popular cosmetic treatment approved in 2002 to minimize the appearance of glabellar lines -- vertical furrows between the eyebrows that become more pronounced as we age. By preventing muscle contractions that cause facial lines, Botox smooths the skin and makes it look younger. It's now widely used to treat a range of facial wrinkles, including those that appear on the neck (turkey neck), at the corners of the eyes (crow's feet), and across the forehead.

Botox gets the headlines these days as a wrinkle reducer, but it has a longer history as a medical therapy. In the late 1950s, researchers showed that injecting tiny amounts of botulinum toxin relaxed overactive muscles by blocking the release of acetylcholine, a neurochemical essential for muscle contraction.

Botox and its cousins have the official go-ahead for just a few medical indications, but once a drug is approved, it can be prescribed at a clinician's discretion. So the toxin is now being used for a growing list of conditions. Many of these uses make sense given the toxin's effect on muscle action, but some experts are concerned about the lack of studies proving safety and effectiveness.

Before considering a botulinum toxin injection, you should learn about the proven (and often less invasive and less expensive) alternatives. A qualified physician is unlikely to suggest botulinum toxin unless the alternatives have failed, or studies have shown it's the best (or only) option. Keep in mind that unapproved treatments may not be covered by insurance.

Ringing in the ears (tinnitus)

Whether botulinum toxin is used for cosmetic or medical purposes, its effects are temporary, so repeated injections are part of the therapy. The dose depends, among other things, on your weight, the condition being treated, the preparation used, and the amount of muscle into which it's injected. With repeat injections, muscles may atrophy and lose some function, an effect that's reversed when the injections stop.

Some patients receiving botulinum toxin in large doses for medical conditions have become resistant to the drug, that is, they've developed antibodies that hamper its activity. Resistance may be minimized by giving the smallest effective dose and spacing injections further apart. - Health Watch

It's a good choice for dystonias. Dystonia is a neurological disorder characterized by chronic, involuntary muscle contractions resulting in uncontrollable movements or postures. Focal dystonia is any dystonia limited to a specific group of muscles, for example, cervical dystonia, which involves the muscles of the neck and shoulders, or spasmodic dysphonia, which involves the vocal cords.

Toxin injections have shown beneficial effects on many focal dystonias that do not respond to physical therapy, medications, and surgery. Possible side effects include muscle weakness, flulike symptoms, and dry mouth.

1. Cervical dystonia (CD): Abnormal, painful positions of the head, neck, and shoulders. -approved. A 2008 Neurology review of randomized controlled trials confirmed that both toxin type A and type B are safe and effective. There are few effective alternatives for CD.

2. Blepharospasm: Involuntary blinking or squinting. -approved. In 2009, the Cochrane Database of Systematic Reviews concluded that 90 percent of patients benefit. There are no effective alternatives.

3. Writer's cramp, musician's cramp: Limited finger movement, impairing ability to write or play a musical instrument. In golfers, it can cause trouble putting, called "the yips." Several small trials have found that toxin injections can alleviate hand cramping; to avoid side effects, find a clinician with experience and skill injecting the toxin. Other medications have shown few benefits; surgery is not effective.

4. Spasmodic dysphonia (SD): Spasm of the vocal cords. Disrupts speech and affects voice quality, producing a "strangled-sounding" or (less commonly) breathy voice. The toxin seems to be more effective for SD characterized by a strangled-sounding voice. There are no effective alternative therapies for SD.

Botulinum toxin is more effective overall than topical nitroglycerin, but patients who don't respond to one of these treatments often respond to the other. Because the injections are invasive, it's probably best to try nitroglycerin first. If you need the toxin, insurance usually covers the cost.

Botulinum toxin injections are an option for women who get no relief from physical therapy or anesthetic injections. The evidence so far is sparse but promising. A pilot study involving 12 women given Botox injections in the pelvic floor found some pain reduction. In a randomized controlled trial involving 60 women with chronic pelvic pain, Botox was more effective than a placebo in reducing pelvic-floor muscle pressure and some types of pain.

7. Botox for headache? Probably not. Researchers began to study Botox as a treatment for headaches after migraine patients getting cosmetic injections reported having fewer headaches. Scientists speculated that the toxin suppresses not only muscle contractions but also pain signals. But now, data suggest that the toxin isn't much better than a placebo in treating most headaches.

Based on a review of 11 randomized controlled trials, researchers reported in the journal Neurology (2008) that the toxin was "probably ineffective" in treating episodic migraine and chronic tension headache. As a result, the (AAN) advises against the use of botulinum toxin for these purposes. That's not to say it might not work for certain individuals, or at doses larger than those used in the controlled trials. But given the lack of proof, the possible side effects (drooping eyelid and temporary weakness of neck muscles), and the expense ( to more than per treatment, depending on the amount of toxin used), it's probably best to avoid botulinum toxin as a headache remedy, unless you and a physician familiar with your situation determine that it's worth a try.

Other Uses of Botox

There's reasonably good evidence that botulinum toxin is safe and helpful for several other medical conditions, such as hemifacial spasm (chronic facial muscle contraction), achalasia (a rare esophageal disorder that makes it difficult to swallow food), axillary hyperhidrosis (excessive sweating from the armpits), palmar hyperhidrosis (excessive sweating of the palms), essential hand tremor, and spasticity from conditions such as stroke and multiple sclerosis.

Toxin injections are no cure-all. As noted above, reports have underscored their limits as a headache treatment. And although the has approved botulinum toxin for the treatment of strabismus (misaligned eyes), there is a shortage of high-quality (randomized) evidence for this approach, as well as a complication rate ranging from 24 percent to 55 percent, according to a 2009 report in the Cochrane Database of Systematic Reviews.

Black-Box Warning and Other Safety Issues

In , the ordered a "black box" label for all Botox and similar products -- the strongest drug-packaging warning that the agency can require. The label now states that the toxin can potentially spread beyond its injection site to other parts of the body and cause symptoms of botulism, including muscle weakness and trouble breathing or swallowing.

The move was prompted by reports of serious health problems and a number of deaths arising from the unapproved use of the toxin in treating certain medical conditions, especially spastic limb movements in children with cerebral palsy. The agency emphasized that spread of the toxin to other body sites is not a danger when Botox is used at approved doses for cosmetic purposes. The also warned that toxin potency can vary among products, so doses, which are expressed in "units," aren't necessarily interchangeable from one product to another.

Finally, if you're considering botulinum toxin injections for any reason, cosmetic or medical, the standard caveats apply: Look for a licensed, board-certified physician who has extensive experience with botulinum toxin and its potential side effects. Don't be afraid to ask questions. Request permission to speak to a patient the clinician has treated. And before treatment, be sure to tell your physician about any prescription or over-the-counter medications you're taking, as well as anything you're allergic to and any medical problems you might have.