Eradicating Polio is in the Hands of the Muslim World 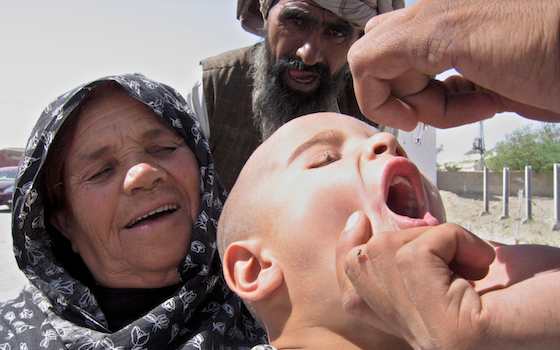 Eradicating Polio is in the Hands of the Muslim World

Polio eradication in Pakistan began with high hopes. The first Pakistani child to be vaccinated against polio, in 1994, was the daughter of Pakistan's Prime Minister, Benazir Bhutto. Aseefa Bhutto has since become a national ambassador for the polio campaign. Twenty years on, Pakistan's women find themselves at the most dangerous front of the polio endgame.

In January, gunmen on motorbikes shot three members of a vaccination team in Karachi. On March 1, two bombs minutes apart struck tribal police assigned to guard polio workers in Khyber Pakhtunkhwa province, northwest Pakistan. These attacks have brought the number of polio workers and their escorts killed since the Pakistan Taliban first began targeting them in July 2012 to 43.

The majority of these victims are female Pakistani polio workers often working for as little as a day on vaccination drives that last three to five days. Pakistan's polio ambitions depend on these invisible women -- a network of more than 106,000 'lady health workers' as they are known -- many of whom, through poverty and bereavement, are obliged to be breadwinners.

Over the past two years they have been targeted by drive-by shootings or attacks on health centres. The situation became so bad that Pakistan's polio campaign was suspended in 2012 until the programme resumed with workers accompanied by security guards. The women continue to feel vulnerable, however, and remain targets despite their escort.

In 1988, when the global plan to eliminate polio began, the disease affected 125 countries. It was one of the most dreaded childhood diseases of the 20th century, and epidemics would spread through cities leaving children suffering muscle weakness or paralysis. A quarter of a century later, polio remains endemic in two Muslimmajority countries -- Pakistan and Afghanistan -- and in northern Nigeria.

If Muslim political will can be measured in cash terms, the major commitment has come from Abu Dhabi's crown prince, Sheikh Mohammed bin Zayed, who has pledged to the Polio Eradication and Endgame Strategic Plan which aims for a polio-free world by 2018. But this struggle needs much more than dirhams or dollars. It needs imagination. It needs the leadership of the Muslim world to commit to eradication.

Obviously, Pakistan has its hands full: enmeshed in conflict across the border with Afghanistan, it is fighting a half-hearted war with domestic jihadists, while facing the prospect of a power vacuum when US troops withdraw from the region. Amid this, Pakistan is beset with a weak government whose reach is limited. Polio affects some of the most geographically remote areas of Pakistan where it continues to be active despite inhospitable cold which would normally deter outbreaks.

When I travelled to the Swat Valley to survey a programme to de-radicalize child Taliban militants in March 2012, I was asked to treat families who had heard that 'an American lady doctor' would be visiting. All of these families claimed at least one male relative as a jihadist undergoing de-radicalization.

About 25 people were waiting to see me. They had walked down the mountain side in the early morning darkness.

The families chose to consult me en masse -- grandmother, mother, sister, daughter, very young brothers, all together. Each listened to the others' complaints and added details.

I spoke to them in Urdu as my pharmacist translated into Pushto. They were literate in neither language or in the language of health. Many were wearing their best clothing -- a marriage dress or an Eid outfit, some with their most treasured paste jewellery -- a heart-breaking symbol of the pride they held in meeting a doctor. I treated entire families devoid of male relatives. They told me fathers and husbands were dead. Sons had left, on jihad operations or were in detention in Pakistani or Saudi gaols. These people and their hardships gave me insight into who Pakistan's polio eradication programme must reach. Almost all lived in mud-walled homes, without electricity.

In contrast to the naivete of the local people, the Pakistani Taliban leaders are better informed in the ways of the world. Realizing the elimination of polio is a global goal, the Taliban see the eradication programme as a bargaining chip to exchange for the cessation of US-operated drone operations targeting militant leaders.

The issue of polio vaccination is shrouded in conspiracy theories. The US operation to track Osama Bin Laden through DNA sampling relied on a sham hepatitis B vaccination programme organized by the CIA. This has given false credibility to propaganda that the polio campaign is another covert programme -- to sterilize, disable or otherwise harm Pakistani children. Others claim vaccination is un-Islamic, which is a way of intimidating parents into refusing it. It is a tactic used by Islamists in their war against secularization.

Whenever women are seen in public, without being escorted by husbands, fathers or brothers, Islamists cry secularization. This puts female vaccination workers at risk and also, perhaps, a mother who asks for the vaccination of a child.

Efforts to secure fatwas denouncing violence against vaccination workers have been made. In December 2013, the reported that the leader of a prominent religious seminary in Pakistan, Maulana Sami ul Haq, had reversed his opposition to polio vaccinations and urged parents to immunize their children.

Despite the global focus on polio eradication and the crisis that the programme faces in parts of the Muslim world, no Muslim world leader has come to the fore to champion the eradication of polio.

When attention is not focused on the Arab Awakening or the Syria conflict, Muslim public opinion tends to be attuned to prestigious events such as the World Expo to be held in Dubai in 2020 and the Fifa World Cup to be held in Qatar in 2022. While these events are milestones for the Muslim world, the resources invested in them seem excessive when public health crises are expanding in vulnerable Muslim states nearby. By theological definition, all Muslim states, rich and poor, are integrated through the concept of the Ummah.

Concerted efforts combining resources, infrastructure, healthcare workers and even security guards could bring the goal within reach only if they come from the Muslim community itself.

The stakes could not be higher. While the eradication of polio seems tantalizingly within reach, public health leaders are concerned about donor fatigue. Throwing good money after bad eventually challenges the most generous donors. These worries are growing as recent events show Pakistani strains of polio are now present in eastern Syria, 14 years after the country became polio-free. Strains of Pakistani polio have been also seen in sewage in Egypt, Israel, the West Bank and Gaza.

While there are no easy answers, we do know that without belief there can be no eradication. The eradication of smallpox took an extraordinary force of will. The US eliminated polio in large part because of its fear of the disease, its belief in its national will and its confidence in its physicians. That President D. Franklin Roosevelt was a victim of polio only galvanized America's energies.

In Pakistan, citizens confront more immediate threats. Daily life is punctuated by suicide bombers, lethal religious persecution and daily power cuts. Next to these threats, the spectre of potential infection becomes less of a priority.

As the US reduces its regional engagement, the outside focus on public health in Pakistan may well diminish.

Yet the gathering storm provides an opportunity for the Muslim world leadership -- not just in government but in the worlds of business, philanthropy and even sport. Today, while the Muslim world struggles with deepening sectarian tensions, the opportunity to fight polio brings with it a chance of unity.

Philanthropists from the Muslim world such as Prince Al Waleed Bin Talal of Saudi Arabia and Sheikha Moza of Qatar are crucial in rallying support for the polio eradication programme.

In sport, Fifa, is another valuable resource. Its chief medical officer, Dr Jiri Dvorak, has inspired the Football for Health Programme to help the world's poorest children, including through the promotion of vaccination.

Fifa's relationship with the Muslim world will grow in the years leading up to Qatar 2022. A programme to eliminate polio from the Muslim world could be developed in tandem with the World Cup. It is up to the Muslim sporting world to take the initiative.

Islam teaches every Muslim that it is his personal duty to combat disease, preserve health and serve our fellow man. We must put an end to violence carried out for cheap political gain against our most vulnerable workers treating our most vulnerable children. Our leaders must inspire Muslims towards this brave choice -- and we must demand nothing less.

"Eradicating Polio is in the Hands of the Muslim World"