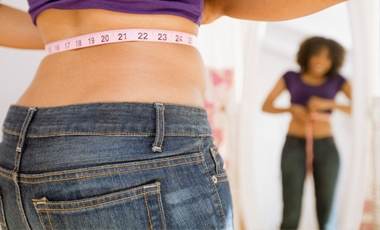 I eat clean, I exercise five to six days a week and I've successfully kept off the 55 pounds I lost a few years ago.

By now, waking up early to work out and reaching for an apple instead of a candy bar are hard-wired into my routine.

It's taken a while, and I've had my fair share of slip-ups, but I'm incredibly proud of where I am today regarding my mental and physical health. Looking back over the journey I took to get here, I can confidently say that the hardest part was getting started.

At my heaviest, my BMI was 30.5, which put me into the morbidly obese category.

I distinctly remember how it felt to be that weight. I hadn't always been overweight. I gained the 55 pounds over the course of a few years after turning 21. Society started to ignore me. I felt like I was stuck inside some costume not knowing how to take it off. I was hesitant to exercise around anyone for fear of being the target of any silent criticisms regarding how much I was sweating or how I looked in gym clothes. The anxiety over my newly gained weight triggered me to turn toward food for comfort, and thus the negative cycle was born.

Recently, researchers, who admit that their study simply confirmed the obvious, found that women who were overweight were significantly less likely to engage in physical activity.

The study recruited 250 middle age women, half of whom were obese, and had them wear a small device that tracked their activity for a week. Twenty months later, the same women wore the device again for a week and the researchers found that physical activity dropped by 8 percent for obese participants while non-obese participants' engaged in the same level activity.

Herein lies the vicious cycle: Are obese women obese because they move less, or are they moving less because they are obese? Does it really matter which came first? I don't think so.

Whatever the source of their inactivity I think the goal should be encouraging and educating people to engage in physical activity. And training the non-obese to be less judgmental when they see overweight people working out. The physical benefits of fitness are enormous, but I must confess I work out as often as I do more so because of the emotional benefits. Being able to accept who I am and what I look like without negativity has increased my overall happiness and confidence in a way that translates far beyond the number on the scale.

Erica House holds a master's degree in psychology and has been teaching at the university level since 2007. In addition, she is a certified personal trainer and freelance writer who is always trying to learn more and travel farther. After achieving -- and maintaining -- her own 50-pound weight loss, she is passionate about helping others on their journey to lifelong happiness and wellness.