The Best Diets To Shed The Pounds 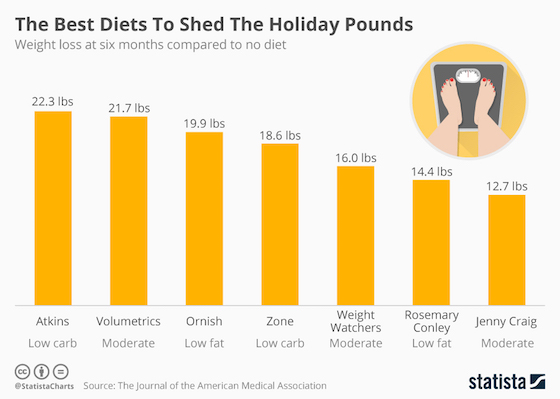 The Best Diets To Shed The Pounds

After a holiday season of extensive eating and drinking, most Americans feel full and bloated by the start of January. Some people make new year's resolutions to lose all those holiday pounds, leading to considerable thought about the pros and cons of various diets.

According to data from the Journal of the American Medical Association reported by FiveThirtyEight, the Atkins diet leads to the most weight loss after six months, 22.3 lbs, followed closely by Volumetrics. Rosemary Conley and Jenny Craig are a considerable distance behind with 14.4 and 12.7 lbs lost respectively.

However, after a year, all diets bring about similar results, with the Ornish diet just about edging it for pounds lost.

The chart above shows weight loss at six months compared to no diet.

Fitness & Exercise - The Best Diets To Shed The Pounds